Most dads are deadbeats?

Most fathers are deadbeat dads who abandon their children and who flee commitment.

We’ve all heard the mantra repeated endlessly by media and popular entertainment. We witness constant fictionalized accounts of it on television, in movies and in commercials. Culturally, it is profitable to sell products in ads using this myth as a selling point. So, what are the facts about paternal participation in children’s lives today? Let’s look at some widely held myths and in doing so, shed light on the truth.

Myth #1: Most dads who owe child support do not support their children financially.

Myth #2: Fathers are more concerned with money than mothers.

This persistent myth is often used to explain the belief that most fathers fail to provide financially for their children. However, judging by the reasons given by parents with physical custody, custodial fathers, more often than custodial mothers, choose not to force the other parent to pay child support (27.5% vs 22.9%) and also a higher percentage of mothers than fathers stated that they did not want their child to have contact with the other parent (21% vs 12.7).  These facts are indicative of custodial mothers engaging in parental alienation. 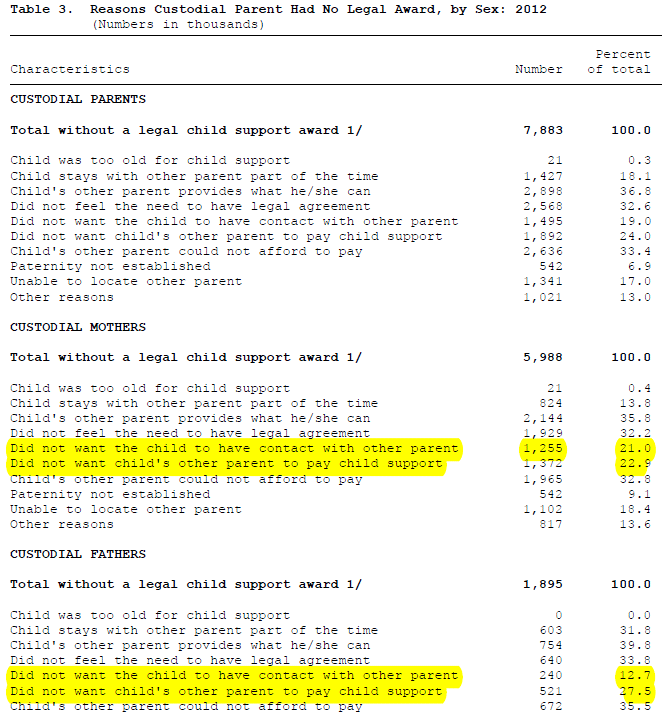 Additionally, fathers are less likely to want gifts for Father’s Day and more likely to say they want time with their children than mothers on Mother’s Day. CBS News reports:

Of fathers surveyed, only 3% of dads said they preferred time alone over other gift options, compared with 11% of moms who responded to a similar survey in May, who wished for time alone away from the kids and spouse on Mother’s Day.”

These numbers hold true whether speaking of a complete family or a broken home; time with children is simply more important than money or gifts for most men. The following graphic from USA Today summarizes the lopsided numbers in Father’s Day spending versus Mother’s Day spending. 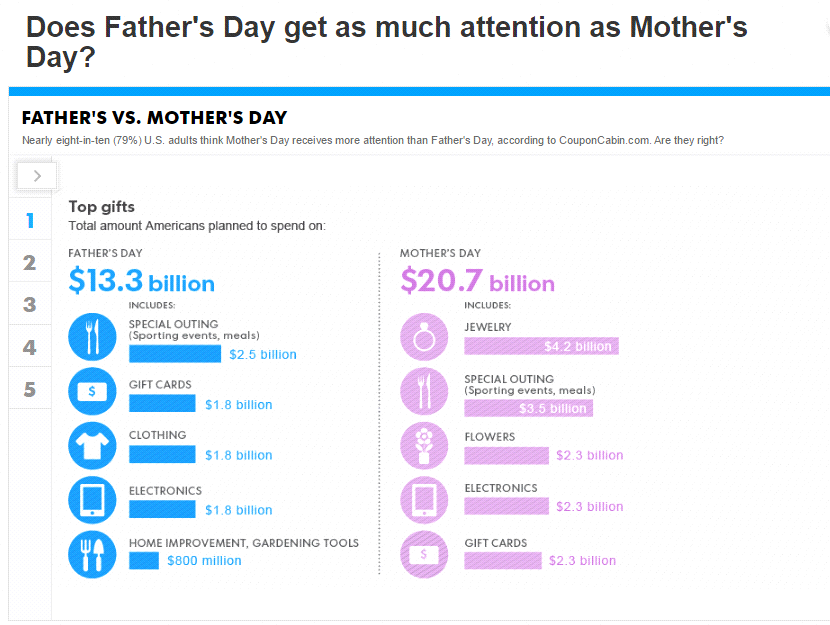 Myth #3: Fathers who live in intact families contribute considerably less to the home than mothers overall.

Work is work, whether performed by a man, a woman or a farm animal. How anyone could discount the labor done that results in bills being paid is an enigma. Nevertheless, this oft-repeated myth is bandied about by the feminist movement with their cherished claim that mothers do all the work while fathers lounge around forcing her to make “sammiches.” However, according to the Pew Research Center, when work outside the home is combined with the hours fathers and mothers devote to household duties, fathers actually devote slightly more of their time to labor than mothers (54.2 hours vs 52.7 hours). 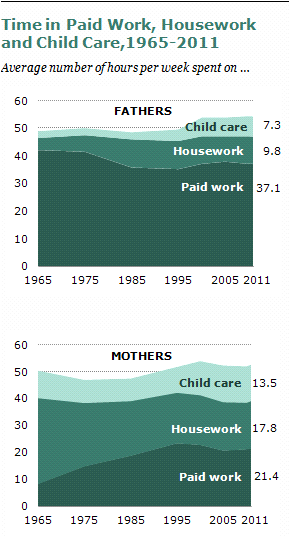 Myth #4: Most fathers who don’t pay the child support they owe choose not to out of greed.

This might seem a repeat of Myth #2 but there is enough of a difference to let Feminists to make both claims as suits their purpose. On the one hand, they claim “men are more focused on money than the welfare of their children.” On the other hand, they also claim that “men simply love money more than their child.” The myth of the greedy cheap skate who simply wants to pocket the money is one that won’t die easily but the facts show that most of the child support owed to mothers is owed by poor fathers and a very small percentage is owed by fathers who live above the poverty line. The New York Times reports:

About 70 percent of the debt is owed by men who earn $10,000 a year or less, or have no recorded wage earnings at all, according to the Federal Office of Child Support Enforcement. Less than 4 percent is owed by men with incomes of more than $40,000.

Perhaps the most widely spread myth of them all is the claim that black fathers are nowhere to be found and that most black mothers are left to raise the children on their own. Children estranged from their fathers are a problem in every demographic regardless of race, one that is more pronounced among Blacks but not to the degree we are led to believe. An impartial review of the facts can defuse the hysteria. Government research reveals that black fathers, despite being less likely to live with their children than white fathers, are involved in their children’s lives and to a much higher degree than people think. The LA Times reports:

For instance, among fathers who lived with young children, 70% of black dads said they bathed, diapered or dressed those kids every day, compared with 60% of white fathers and 45% of Latino fathers, according to a report released Friday by the National Center for Health Statistics.

Nearly 35% of black fathers who lived with their young children said they read to them daily, compared with 30% of white dads and 22% of Latino dads.

Myth #6: Most fathers do not live in the same home with their children.

But of the fathers living apart from their children, black dads were the most involved in their kids’ lives.

Myths do not die easily; their persistence is part of their nature. But we have an obligation to society and to posterity to debunk false myths with truth whenever possible before they can do further harm.

These sexist myths are internalized as truth by the police, family court personnel and the people who will grow up to make or enforce laws that dictate family structure. What children need is not more laws or rhetoric; they need their parents in their lives.

This is a culture that seems hell-bent on creating the deadbeats it claims to hate and the only way to prevent this recurring process is to give people access to the truth.

Mike Buchanan - a man with a van... a surprisingly valuable van

Milo Yiannopoulos vs. Feminism: A response to The Big Question

Why feminism may be right