Public letter to Emma Howland-Bolton, teacher at Detroit public schools, regarding threats of violence and death by protesters under her organization

Addressed to the following:

My name is Jonathan Taylor. I am the founder and publisher of A Voice for Male Students, the leading Men’s Human Rights website for men and boys in education. I note – as is widely available on public record – that you are a teacher in Detroit. From one teacher to another, greetings.

I am writing to call upon you to take an opportunity to enhance the credibility of your protest. In summary, you have been heavily invested in organizing a protest that has included threats of violence and death against organizers, attendees and hosts of the upcoming conference at the Double Tree hotel in Detroit. Indeed, these threats of violence and death have become so pervasive and severe that the hotel is now requiring an entire squadron of police to station themselves at the premises for 24 hour-a-day security for three days straight so that people cannot be killed for simply listening to academics and advocates speak at a conference.

The official letter by Double Tree to conference organizers can be found here.

As you well know, the upcoming First International Conference on Men’s Issues unites academics and advocates from diverse backgrounds and across the political spectrum. The roster of speakers includes Dr. Warren Farrell (three-time board member of the National Organization for Women-New York), Senator Anne Cools (the first black female senator to be elected to Canada’s upper house), Erin Pizzey (the founder of the first battered women’s shelter), Dr. Paul Nathanson (a gay academic who has written numerous books on gender issues), and many more.

While your protest is ostensibly predicated (as you erroneously claim) on the notion that this group of academics and advocates are responsible for violence against women (including the likes of Elliot Rodger, who – it would be apropos to note – murdered twice as many men as women), you have provided no evidence of a direct link to support these accusations. Furthermore, no one has ever been able to directly link Rodger to any Men’s Human Rights website, social media channel, or organization. My own website – the leading Men’s Human Rights website for men and boys in education – published an article sternly criticizing his actions.

Simultaneously, as an event organizer and facilitator you have failed to exercise discretion in taking any stance whatsoever against protesters who make threats and suggestions of violence and other forms of criminality among your own rank and file as today, 5-31-14 at 12:51 PM. These threats and suggestions of violence and criminality have remained on your group for at least three solid days while countless posts by men’s advocates asking for nothing more than a calm, civil discussion were deleted left and right.

You were far, far too slow in addressing this. And you know it.

Your prior history of facilitating and organizing protests also includes other events that have escalated into criminal conduct, demonstrating a cavalier “it’s ok for us, but not for them” stance toward criminal behavior. This includes the group with the disconcerting title “By Any Means Necessary,” of which “any means” includes illegally trespassing into and occupying a closed public building to “protest” its closing down well after its final hours, resisting arrest, and obstruction of justice (related: video).

Given your history, it reasonable to both call to this to public attention. Given that these disconcerting double standards are predicated upon ideological worldviews (which often have a “totalizing” effect on the people who adopt them), I think it also reasonable to be concerned in what capacity you – as an educator – enforce double standards toward your own students on the basis of sex, both in methods of instruction and discipline. 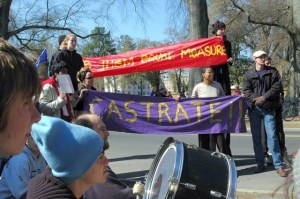 As I noted in a recent article, threats of violence are common among those who oppose the human rights of men and boys. During the 2006 Duke lacrosse false rape case, students paraded around a banner reading “castrate,” an open call for violence against the three young men who were falsely accused of rape. In a staggering example of inverted moral reasoning, they rationalized their call to violence by saying they were opposing an incident of violence which, as it turned out, never happened.

Last year those protesting men’s advocates who were sponsored by the Canadian Association for Equality (CAFE) to speak at the University of Toronto called for violence if their demand that the university close down the event were not met. In pursuit of a sexual misconduct policy which defined rape so broadly beyond its legal definition that it essentially eviscerated due process, the Feminist group “Radical Womyn of Antioch” threatened Antioch College with violence if they failed to adopt their policy [1].

Given that there is historical continuity and precedent among those who oppose the human rights of men and boys with threats of violence, it is imperative that we challenge it. You may be wondering why I am addressing you specifically. As follows.

You have acted as the primary networking administrator of your group, networking and bringing in protesters from Take Back the Night groups, shelter workers, women’s advocacy groups and bloggers, hotel workers, public officials, and more. You have also engaged with users on a comment-by-comment basis far more consistently than any other administrator. Given your disproportionate investment and profile relative to other administrators, you have effectively established yourself as the “go-to” point of contact for the protest.

In other words, you have leadership. And with leadership comes responsibility. It’s not just a party.

There is one more reason why I am singling you out other than your clear prominence in organizing and facilitating these protests: you are an educator. That in and of itself should come with its own class of standards, as those upon whom we confer such public faith should be individuals who exhibit a standard of behavior, professionalism, and due diligence that is nothing short of exemplary. Doubly so when those in their charge are impressionable children.

Leading men’s advocates have had no problem denouncing violence in the past. In a “heads up” for an academic speaking event last year at the University of Toronto the staff at A Voice for Men – in strong and clear language – threatened to automatically sever ties with any men’s advocate who engages in violence (attacking or defending) and hand them over to the police. Indeed, they have told men’s advocates to not even defend themselves if under attack, but rather to either retreat or – if they cannot – to curl up on the ground in a fetal position while others filmed and contacted police.

A Voice for Men and their affiliates have also partnered with men’s advocates at the Canadian Association for Equality (CAFE), offering a reward of $4,000 for a Feminist student who was allegedly (but not confirmed to have been) assaulted. When they encouraged Feminists to match it they were met with silence.

And Voice for Male Students has always maintained a policy of nonviolence. Indeed, it is one of its nine founding values.

In an ideal world there would be no need to explain to you why a policy of nonviolence is essential to any human rights endeavor. I belabor this because it is unfortunately not so apparent to our opponents. Violence can be compared to George Washington’s characterization of government: a “dangerous servant and a fearful master.” Violence does not breed peace, but only more violence, and it inevitably harms those who initiate it.

I’m not asking you to agree with the issues presented at the conference. Issues which, I remind, will be represented by academics from diverse backgrounds and across the political spectrum. But I do strongly disagree with is the widespread permissiveness among our opponents for threats and suggestions of violence, death, and other forms of criminal behavior that have no place in a free and enlightened society. Indeed, slander, libel, misrepresentation, and censorship – historically the bread and butter of our opponents – while remaining pervasive, has now become the least of our concerns.

I look forward to your substantial and more evenhanded public reaffirmation to nonviolence by the end of tomorrow, 6-1-14.

Founder and Publisher, A Voice for Male Students

Notes:
[1] The excerpt is from page seven of the book Rape on Campus, a collection of academic essay