“Whitey” is under every bed, he’s behind every problem facing women and minorities, he is omnipresent, he is both our mortal enemy and yet we are all so helpless that we must beg or demand that he fix the problems he supposedly created for us. All the victims of whites together could build a better world, a world of peace and harmony without war, without pollution and most of all, without rape. If we all would just invest our energy into ending white privilege and securing favors for women then we can all live in a Grand Feminist Utopia.

Or so feminists would have you believe. This reductionist view of Black people and women is akin to a modern-age Noble Savage doctrine and is insulting to not just minorities and women but to every intelligent white person as well. Here are some of the atrocious examples of recent feminist propaganda aimed at reinforcing this world-view. 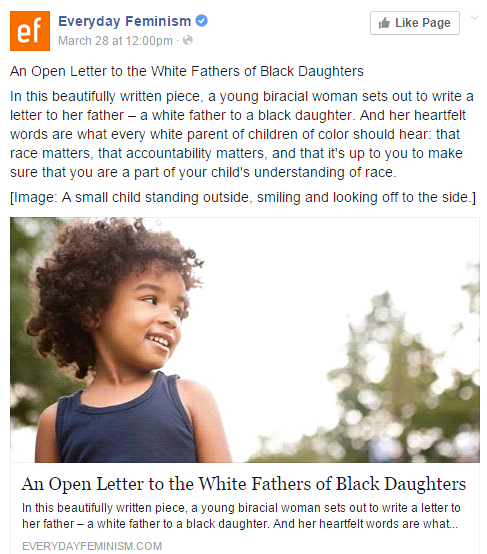 Quote from the above article:

You have both the privilege and the curse of living in the unmarked, white blind spot of the American racial imaginary. If you have enjoyed living there, departing only to return comfortably home to White every night, I’m afraid you have a problem.

I am your problem, Dad. You are the white father of a black daughter. You are accountable to a life that is squarely outside of the jurisdiction of the whiteness that swaddles you….

Somehow, you feel like a white man first and my dad second.

Amazing, isn’t it? To think that a daughter could approach her own father, the one who nurtured her, cared for her and comforted her throughout her entire childhood and treat him like an enemy simply because he’s white. This man was “daddy” long before he was a “white man” in her eyes. Her self-hating prejudice is the byproduct of some hardcore feminist indoctrination more than likely.  Let’s examine another one: 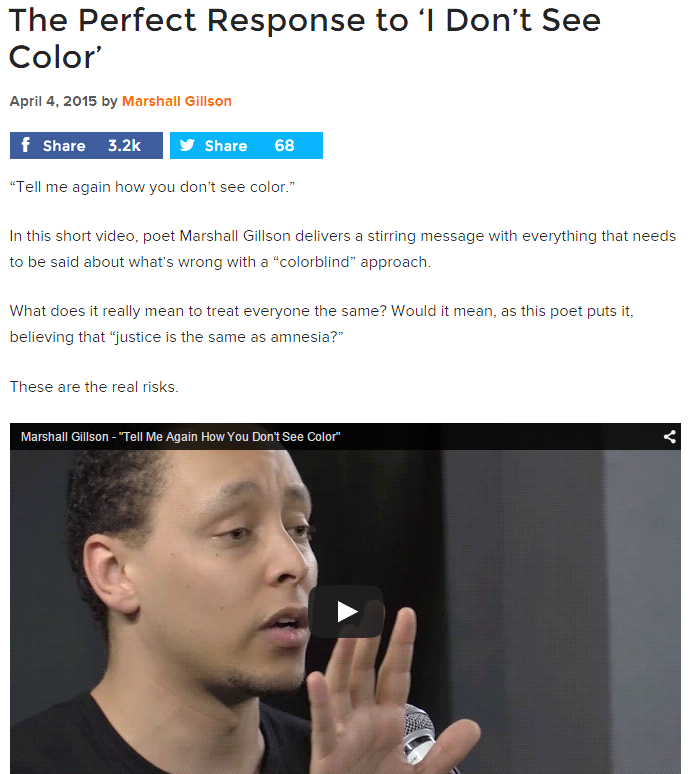 Tell me again how you don’t see color. In this short video, poet Marshall Gillson delivers a stirring message with everything that needs to be said about what’s wrong with a “colorblind” approach.

Of course the basic message this “poet” is communicating to the audience is that white people are guilty by virtue of their skin color of covert racism and that people who try to move past color must be bullied back into displaying white guilt. The useful idiots who adopt this mentality end up alienating people who should have been their allies. 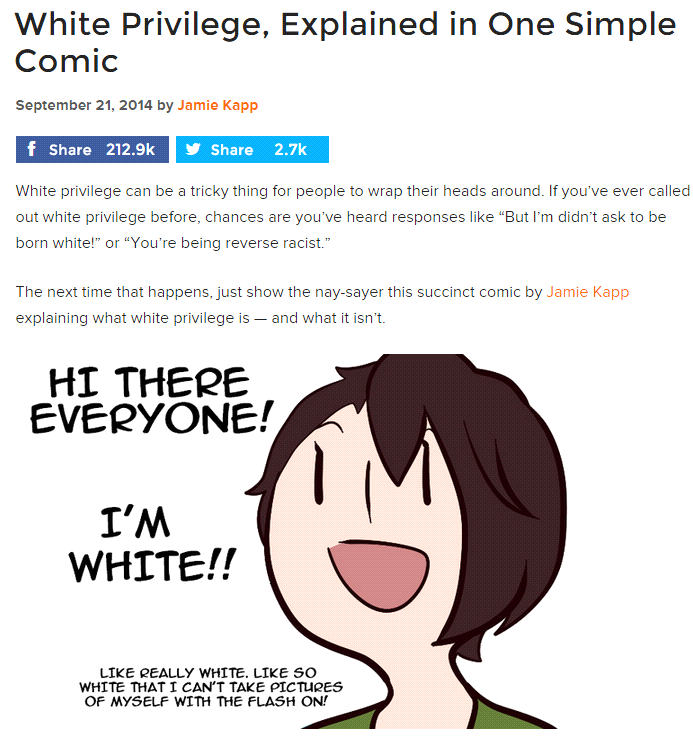 In the above comic we see feminists brainwashing their followers with the assumption that all white people are privileged just because they exist. Certainly most of the white female feminists we encounter do come from a privileged class since a large portion of them attend big universities at their father’s expense and they have the luxury of lounging around in Women’s Studies classes sipping Starbucks. There is a large difference however between the average pampered white woman and the homeless white man sleeping on the streets or contemplating suicide because he’s tired of being treated like a human ATM machine.

This is the twisted rhetoric of the feminist and race-hustler movement we are up against. Sadly too many people have either fallen for it and it is tearing our nation apart at the seams. The philosophical narrative ignores the fact that all throughout history in the United States most human rights movements have been composed of good “people”, regardless of color or gender. Without such unified cross-cultural efforts none of these movements could have succeeded.

It’s no wonder that the Jesse Jacksons and Al Sharptons and other race-hustlers feverishly defend false rape claims like we witnessed in the Tawana Brawley and Crystal Mangum cases. They know where their bread is buttered and they know that if they want to continue filling their pockets through identity politics they have to lick the feminist movement’s boots.

As such, there will be no efforts from them to liberate black fathers from the corrupt family court system.  There will be no marches for men who are child support slaves due to being forced to pay for children that DNA tests have proven are not theirs.  These self-serving charlatans have remained silent (or joined in) on labeling Bill Cosby a rapist without demanding he be innocent until proven guilty. They will leave you isolated while they cry wolf displaying racial paranoia until the nation is too exhausted of sympathy to respond when someone suffers from real racism.

Isolation is detrimental to sanity because it is much easier to formulate and bask in xenophobic prejudices of “the other” when you live in a narcissistic echo chamber composed only of people who look just like you, talk just like you, and thus mirror the same cultural bigotry. As a Black man, I am well aware of the myriad problems men in disadvantaged communities face.

I grew up in the St. Louis area and went to school in the poverty stricken East St. Louis area as well as the violent Ferguson, Missouri neighborhood. Two of my childhood friends were gunned down at a young age. However it took me years to realize that the greatest determining factor in issues plaguing Black men was gender rather than race. This is evident in the fact that the greatest sentencing disparity in prison is based on gender rather than race and that police profile people based on the fact that they are men more so than because they are black.

If there’s anything I’ve learned it’s that it took people of all colors to intervene in my life and to influence me not to go down the paths that resulted in the demise of my friends. My ticket out of the ghetto was the US. Army and that path eventually led me into the Iraq War in 2003. In the Army I was exposed to a multitude of different cultures and peoples.

Though the experience was often traumatic it resulted in a maturation process that forced me to see outside of myself. I had to learn to rely on others who were very different from me and to help them in turn and in that process I became cognizant of the fact that beyond those variable exteriors we all had similar dreams, we all bleed the same color, we all wanted better opportunity, and we all were seeking purpose in life.

This was a makeshift brotherhood but it was an efficient, disciplined, and eventually a cohesive, tightly knit group of people who were prepared to die for each other without hesitation. In areas where one person from one background was weak, another person from another background was strong, and I began to see where I myself fit in within that equation. This was a necessary road towards finding purpose and learning to transcend the shallow racial differences modern culture had told me were the necessary order of the day.

I brought these lessons with me into the men’s movement. I now understand that this is what we need; a brotherhood, an Army, a fraternity that can acknowledge that we are different but still love each other and stand together as brothers first and everything else second. This does not mean that women need to be excluded from the men’s movement but we have to have a sturdy foundation of brotherhood in place when women are around or else the male instinct to compete with each other for female attention will take over and eventually destroy the movement.

This is the instinct that the feminist movement plays upon and has worked with lethal precision. This is why they give lip service to caring about Black men while putting in place legal policies in the family court and criminal court system that result in Black men being incarcerated at higher rates and losing access to their children.

It’s all about dividing Black men from white men and subsequently making both demographics easier to domesticate. And meanwhile most men are blinded to the fact that it is mostly spoiled, middle-class white women (and to a lesser degree, bitter Black women) manipulating the entire process. They have taken over almost every major public and governmental institution using the gender card and race card and they will not stop until they are met with a unified force of men (and women) from all backgrounds, colors, religious affiliations and classes.

The “solution” is not to force diversity in the clichéd manner in which feminists do so but to understand the bigger picture when having minor squabbles with people based on race.

We are up against seemingly insurmountable odds but it’s not as if men have not defeated drastic odds before. We are men, we have climbed the highest mountains, we have visited the moon, we have sailed every sea and ocean on the planet, we have cured epidemic diseases, and we will defeat the obstacles the feminist movement have placed in our path as well but we can only achieve victory together.

The courage of building bridges

How to destroy a man

What Men Do: Chiune Sugihara