Chivalry but equality: the feminist double-standard

Author Warren Farrell has written in detail on how the feminist movement has freed women from the old role women were formerly forced into by circumstance and by chivalrous laws. Men, however, have not been freed and there is no effort whatsoever by mainstream culture to liberate them from their role as provider/protector/performer.

Men are expected to treat women like helpless, delicate flowers one day and then the next, we are supposed to forget that they were helpless and see them as competent enough to make half of the decisions in relationships or the workplace. We are directed to believe women capable of making good decisions. If we note the hypocrisy, we are called misogynists.

When women are asked what they want in a relationship a sizeable portion of them will say that they want a man who will provide them with some measure of chivalry but one who can also “isn’t afraid of an independent woman”.

These are the same independent women who are often overly paranoid of men but the second they get a flat tire at the side of the road or their car gets stuck in the snow, they can magically trust any unrelated man in the city to come along and change her tire for her or push her out of the snow. No fear, no suspicion. Just the expectation, in fact the promise, of chivalry.

The accumulative burden of constantly supporting this double-helping of entitlement eventually wears men down and has led an increasing number of men to the conclusion that dating is simply not worth it.

The feminist movement, which claims to be driven by an overriding desire for equality has reinforced and demanded that women be given both equality and chivalry, and this message is interwoven within much of what feminism pushes for.

Sometimes the message is more explicit than implicit and I have gathered some of the more remarkable examples of it here for your viewing pleasure. First up is an article from Bustle.com titled “Can You Be a Feminist And Still Expect Guys to Pay?” 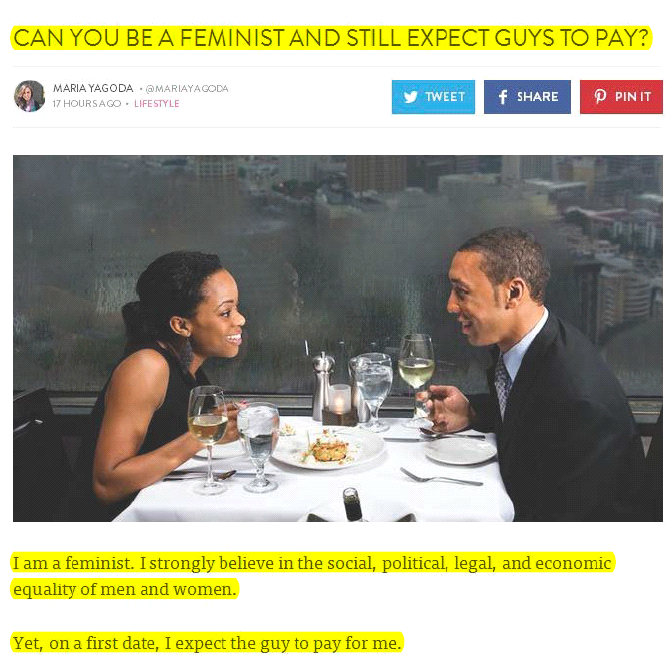 She goes on to add:

“Of course, at the end of dinner or drinks, I’ll make a very convincing slow-motion gesture towards my wallet, which gets progressively slower until he tells me that he’s got the bill.”

So not only is she dishonest in her philosophical outlook but she’s also dishonest with her body language and her expectations of her dates. I hope she’s not confused about why she doesn’t get many second dates.

Let’s move on to the next example. This one is from Forbes.com and the feminist author flat-out states that the man being expected to pay on the first date is about sex and she conjures up the mythical gender pay gap as an excuse: 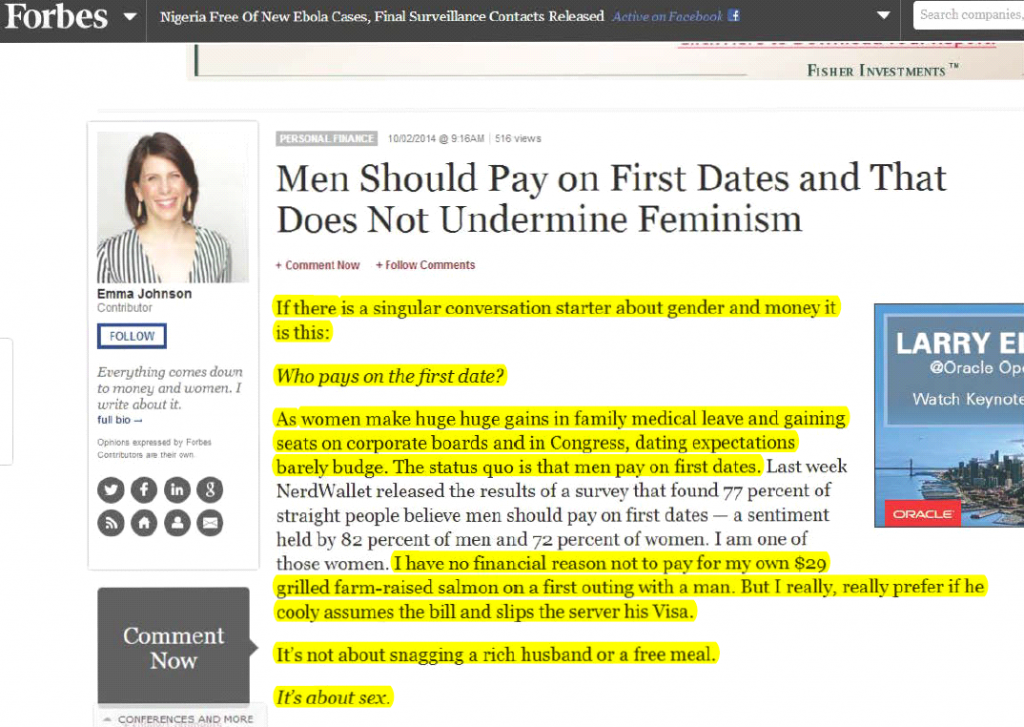 “The other reason men should pay for dates? It’s easy-peasy. The navigation of gender politics is an anxiety-inducing daily grind. Women resent they earn less, care for children more and are expected to wax every last hair from their mons pubis before going on the date in the first place.”

She can’t even be honest about her gold digging nor about the fact that she is a glorified prostitute but there it is in the fine print.

On to the next example. This one is from Elite Daily: 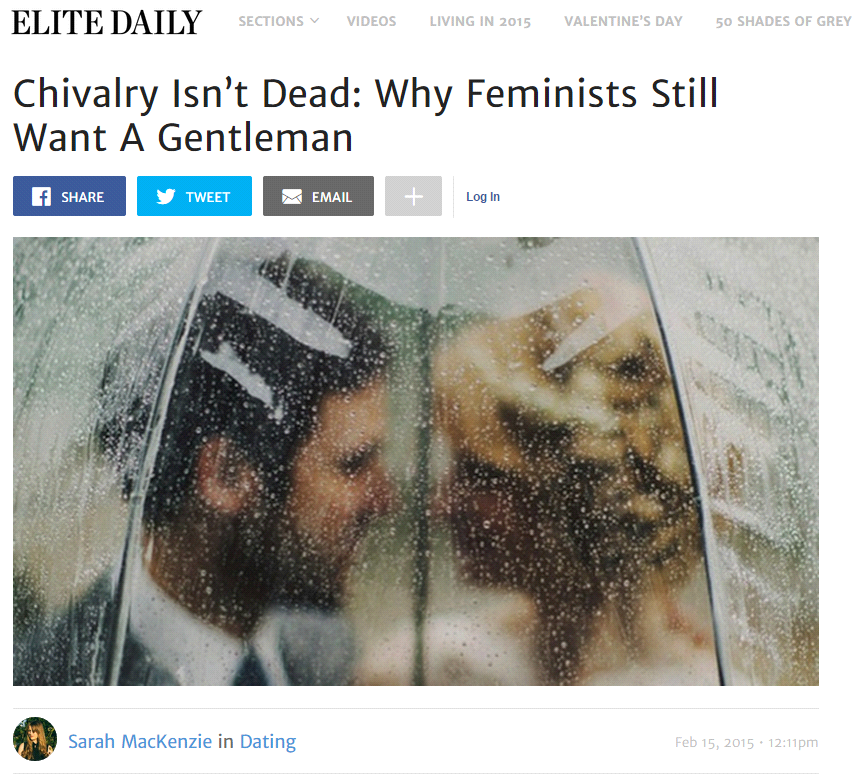 “[L]et’s get one thing straight: I am a feminist through and through. Raised as one of three daughters, it was always without question that I would attend college and pursue a fulfilling career…

But, I value and appreciate true gentlemen because it subtly reveals a more caring, sensitive and genuine side that most males are not willing to broadcast or expose…

So, pay attention, boys, because it certainly does not go unnoticed when you do little things like pay for a first date or open a door for a lady….it really does reveal a hell of a lot more about a male as the gentlemen he is and not just a boy.”

So if you aren’t willing to pay for her dates and open her doors like she’s royalty that means you aren’t worthy of even being called a man!!!! And what do you get in exchange for acting as her servant? You receive the graces of her holy presence, of course! You will notice that there is never any mention in any of these feminist rantings about what women are obligated to do on these dates other than being there and not looking like shit. 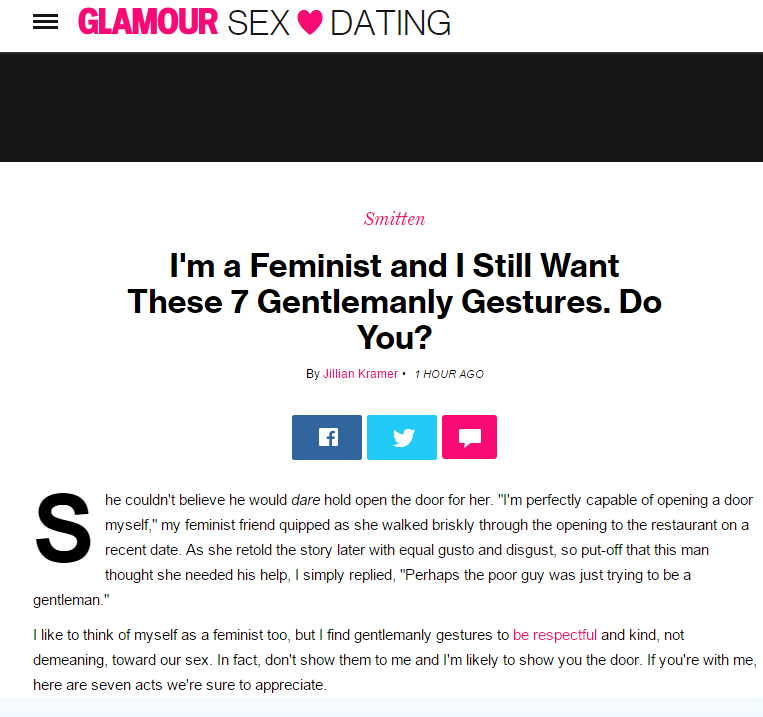 “1. Hold open the door… Yes, I have hands capable of wrapping around a handle, arms able to pull or push a door ajar—but a man reaching for it first, saving me the effort, is oh so sweet if only because it isn’t necessary.

2. Walk on the side of traffic. My guy does this now, and while he’s yet to save me from a barreling bus or a wave disguised as a puddle, it’s nice to know he would. It’s a protective gesture that lets me know I’m more important than his safety or comfort.”

See that? She revels in the knowledge that her man thinks of himself as an expendable knight. The thought of his potential death delights her.

And last, but not least, let’s take a look at the most recent example of the feminist media telling us that women deserve equality and chivalry at the same time. 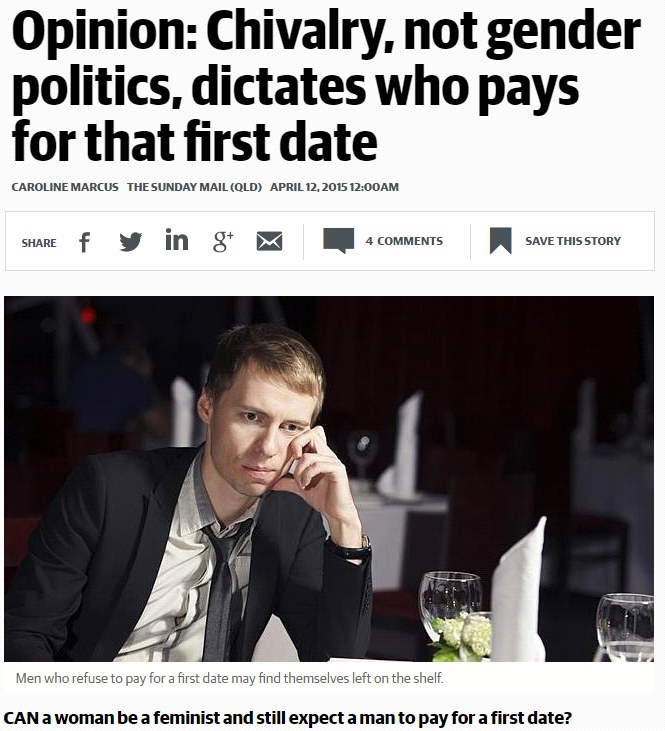 “[A]re the ideals of feminism and the convention of a man paying for a first date incompatible?

I say no. Emphatically no.

I don’t believe it’s paradoxical to argue for women’s rights and equality, yet at the same time think a man should cough up for a couple’s first excursion, whether it costs him $50 or $500.”

Whether it’s $50 or $500? She emphasizes the fact that whether it costs him a little or costs him a lot, it will cost him. This is what men are up against in today’s dating scene and why courtship is dying. By far, the most dramatic display of women’s entitled, double-helping of privilege was broadcast by President Barack Obama when he implied that First Lady Michelle Obama deserved equal pay for being his wife. 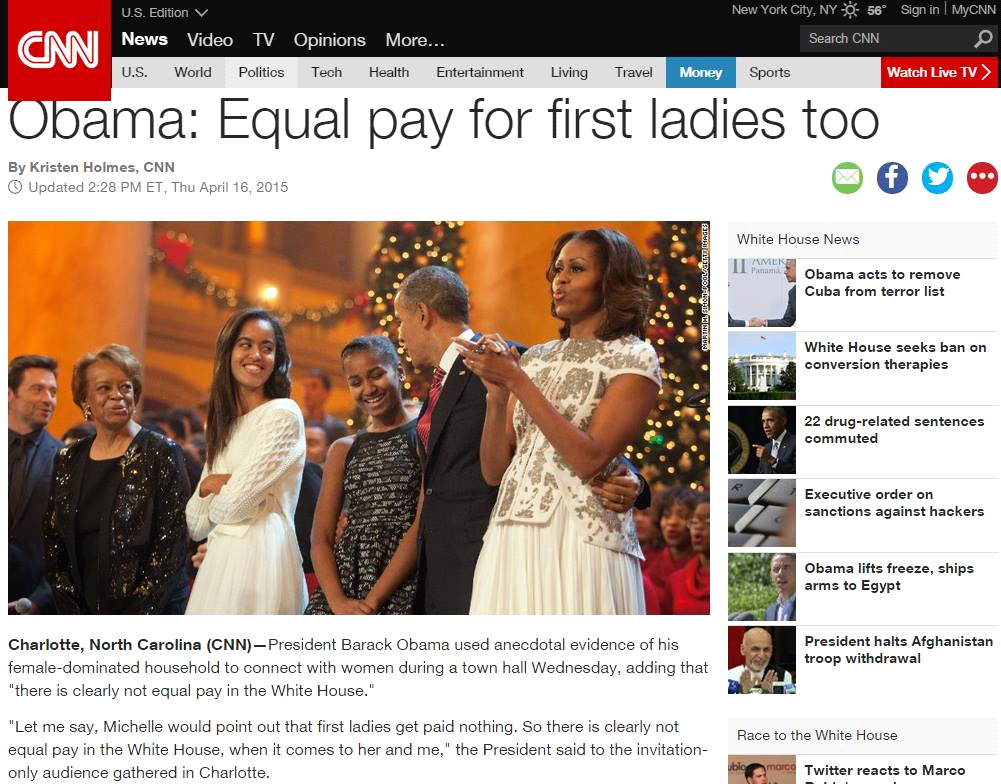 “President Barack Obama used anecdotal evidence of his female-dominated household to connect with women during a town hall Wednesday, adding that “there is clearly not equal pay in the White House.”

“Let me say, Michelle would point out that first ladies get paid nothing. So there is clearly not equal pay in the White House, when it comes to her and me,” the President said to the invitation-only audience gathered in Charlotte.

“But before we were in the White House, I wanted to make sure Michelle got paid as much as she could … If she had a bigger paycheck, then that made us able to pay the bills,” Obama said. “Why would I want my spouse or my daughter discriminated against? That doesn’t make any sense.”

So Obama admits that Michelle partakes of the chivalrous role of housewife, yet she dominates his household and deserves equal pay. Not from his wallet, but from the chivalry-derived paychecks of the taxpayer, of course.

Now don’t get me wrong, I do not have a problem with chivalry nor equality in a relationship. If a couple decides that the man is to take on the more prominent role of provider and protector, that’s fine with me as long as in exchange for this he is allowed to make the final decisions in the home while the woman plays second fiddle.

It goes without saying that a chivalrous relationship is a must when a woman is pregnant and needs someone to watch over her and without a doubt this arrangement has enabled the human species to survive for ages, but today women do not have to get pregnant, and thus we can choose equality in a relationship.

If the couple chooses equality, then the woman needs to be paying her half as much as possible and not expecting the man to be expendable and protect her as though she’s helpless. It’s up to men to force women to choose which role they want to play and to hold them to it. Every woman who wants to have her cake and eat it too needs to be disowned and kicked to the curb.

Men also need to do a better job of calling out this nonsense culturally whenever they see it and we need to do a better job at supporting other men who already are. Raising our daughters to not view themselves as entitled princesses, like the feminist authors showcased in this article, also goes a long way to changing our culture for the better.

I made him remember my name

Feminists further cheapen rape with "My family raped me"