There is something we would very much like to know. Of all the activism they do, is there anything about the feminist “sisterhood” that could be deemed going too far, too corrupt, and which would inspire feminists of good conscience to unite and speak out against it passionately?

Nope. Not so far, and it appears that it will not happen now with WhiteRibbon.org.au (WRA), the Australian version of White Ribbon campaigns.

To put this in a nutshell, WRA is a cabal of very savvy business people dedicated to using the issue of violence against women as a way to self-enrich, travel and party — and literally nothing else.

Even if we take the outrageous feminist position and agree that intimate partner violence is best handled by pointing the finger at men only and helping only women, they are still a horrific investment. They provide no service and render no aid to anyone. This is not hyperbole. They make millions and do nothing save spoil themselves with it.

As one Australian journalist, Andrew Street of the Sydney Morning Herald, quipped:

As part of this they enlist various male ambassadors whose job appears to consist of wearing a white ribbon, say something about how they don’t bash women, and… actually, that would appear to be about it.”

Feminist activists who work in or morally support the domestic violence industry (which only pays well at the top) sit silent; like obedient employees of an escort service. The reasons for it are not entirely clear.

Perhaps all the right people have been “made happy” by WRA and there are people who fear speaking up, but we are betting on a better answer. This kind of freak show is what you will inevitably see when people circle the wagons too tightly for too long; too much time with too little dissent and too little connection to reality.  The hubris and glassy-eyed zeal spreads like mono in a middle school.

Predictably, they are starting to cannibalize each other.

So what does WRA actually do, or at least pretend to do? White Ribbon Australia is by all visible evidence in the business of getting people to sign an online pledge. They have a website hosting the pledge which has about 158,000 signatures.

They also “raise awareness” on White Ribbon Day by teaching schoolboys that they are bad. It makes us wonder, too, if this is the part of WRA that other feminists so admire.

Elizabeth Jackson, a writer for ABC Australia did not find the effort so admirable when her son reported to her that it was a day of bashing boys and making them feel bad.

Maybe some of the boys had smart phones and they could sign the petition.

That is what people get for 2 million a year? Seriously? Since 2009 WRA has collected over 10 million dollars and what they have to show for it is a meaningless online pledge and a day to pick on male children.

Speaking of that, if the mainstay of your shtick is an online petition, and you pull in that much freaking money, then why is your web presence for WRA less than Erin Pizzey’s WhiteRibbon.org, which was literally slapped together a few months ago?

In web presence terms, WRA doesn’t exist in any real way. Guess they could not afford web marketing for their web business, what with all the salary, perks and travel to cover.

Even Aussie feminist darling Clementine Ford had some harsh words for WRA:

Ahmed’s views are made all the more disturbing given his position as a White Ribbon Ambassador. Now, I don’t have much time for the White Ribbon movement. Call me persnickety, but it seems to me that an organisation addressing men’s violence against women should have more stringent standards for action than signing an essentially meaningless pledge and handing out a ribbon that can apparently be worn by anyone. The White Ribbon Foundation has, in my view, very carefully and subtly distanced itself from feminist activism in order to align itself with a more corporate, mainstream agenda that ignores the hard work done by underfunded women’s health services across the country.”

Seems like a lot of people of all flavors share one thing in common. They have no idea exactly what WRA does, even though the sad truth of it is plastered all over their financials.

Note that Ford complains of a “more corporate, mainstream agenda.” She also implies gently that WRA has betrayed the sisterhood and made a cash grab as a small group that does nothing. She is right, of course. That is exactly what they have done. Not that it makes Ford look any better. There is no honor among theives — eventually greed will get them all.

The feminists who care enough about delivering services to battered women to actually do it are being 100% dissed on this deal in broad daylight as WRA laughs all the way to the bank (sorry, but these people are not worth avoiding cliches). Clementine Ford knows all of this, but offers vacant, milquetoast criticism, no more significant than WRA’s silly pledge. The Sisterhood comes before everything, including The Sisterhood.

So, who are the real pimps here and what are they up to? Let’s take a look.

The above image, an iconic clenched fist above a cowering girl, brings donations as surely as a big-eyed African child with his ribs showing. Well played. But distribution of revenue gained from such images, at least by WRA, is starting to raise more than a few eyebrows.

White Ribbon Australia, a company limited by guarantee, is a well established national not-for-profit organisation governed by a skilled Board and operational team which invests at least 85% of its income into primary prevention initiatives focusing on developing community leadership and capabilities to drive positive social change to prevent men’s violence against women. [p.22]

White Ribbon Australia claims to invest 85% of its income into primary prevention initiatives. Let’s see how this claim stacks up against their own financial statements, with a close eye on what percentage of the total income goes to staff.

As you can see, not only has yearly revenue been rising, but the employee “benefit” payment has been taking more of the total revenue too. Moreover, if staff are now receiving approximately 60% of White Ribbon’s total income, it is simply impossible that the organization “invests at least 85% of its income into primary prevention initiatives.”

Employee benefit as percentage of total revenue has risen from 34.9% in 2009, to 59.2% in 2014 – which is almost double the amount of cash being pocketed by a small number of employees. Said differently, in 2009 two-thirds of revenue went directly to violence prevention, whereas now, in 2014-15 almost two thirds go directly into the pockets of White Ribbon employees.

Moving forward, how much closer to 100% of total revenue will the employee “benefit” scheme amount to?

There’s no doubt about where donors’ money is going; the figures speak for themselves. It should also be noted that the employee “benefit” figures above have not included perks such as travel and accommodation, which significantly increases the amount of employee-driven expenses.

What level of “benefit” does Ms. Davies and her industry niche have in store for employees during 2015? We await the financial statements with the prediction that they will be as revealing as those which have come before.

In light of the above figures, perhaps it is not surprising that the WRA Board chose to get rid of people like Dr. Tanveer Ahmed, the White Ribbon Ambassador who recently alluded to “male vulnerabilities” in mainstream media. Vulnerable males are not useful for harvesting WRA’s employee “benefit” payments from gullible donors, who are only too happy to open their wallets for damsels in distress, but who are unmoved, and perhaps even repulsed, by discussions of male vulnerability. 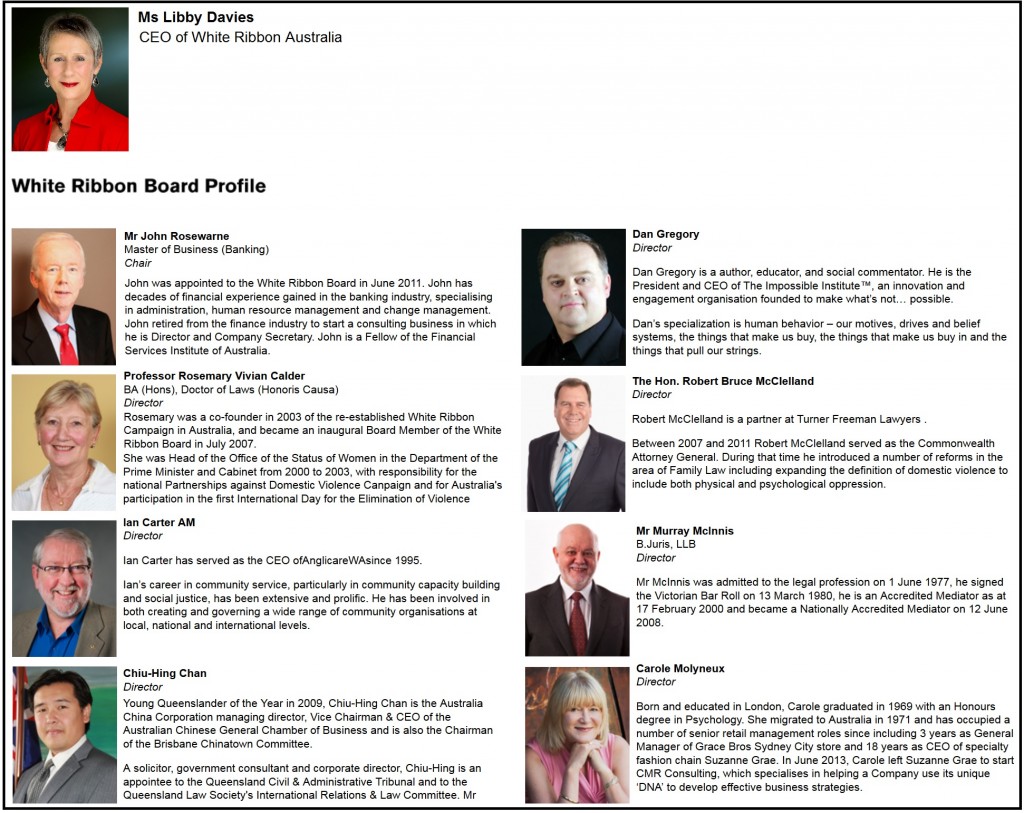 That sums it up and there they are. WRA is top to bottom rotten, and precisely because it was designed to go unchallenged in an already hopelessly corrupt feminist establishment.

Given all this, please allow us to suggest a possible way to express your views on this matter. If you have a Twitter account, and you want to speak to the Australian people, click here.

Zen Men will die without volunteers