The “Enterprise of the Green Shield with the White Lady” (Emprise de l’Escu vert à la Dame Blanche) was a chivalric order founded by Jean Le Maingre and 12 knights in 1399, committing themselves for the duration of five years. Inspired by the ideal of courtly love, the stated purpose of the order was to guard and defend the honor, estate, goods, reputation, fame, and praise of all ladies, including widows. It was an undertaking that earned the praise of protofeminist Christine de Pizan.

According to his Livre des faits, in 1399 Jean Le Maingre, tired of receiving complaints from ladies, maidens, and widows oppressed by powerful men bent on depriving them of the lands and honors, and finding no knight or squire willing to defend their just cause, out of compassion and charity founded an order of 12 knights sworn to carry “a shield of gold enamelled with green and a white lady inside” (une targe d’or esmaillé de verd and tout une dame blanche dedans). The 12 knights, after swearing this oath, affirmed a long letter explaining their purpose and disseminated it widely in France and beyond her borders.

The letter explained that any lady young or old finding herself the victim of injustice could petition one or more or the knights of the “Enterprise of the Green Shield with the White Lady” for redress and that knight would respond promptly and leave whatever other task he was performing to fight the lady’s oppressor personally. The 12 knights promised not just this, however. They offered also to release any other knight from a vow requiring him to fight a duel before a judge. The letter was signed 11 April 1399 by Jean Le Maingre, Charles d’Albret, Geffroi Le Maingre, François d’Aubrecicourt, Jean de Lignères, Chambrillac, Castelbayac, Gaucourt, Chasteaumorant, Betas, Bonnebaut, Colleville, and Torsay. 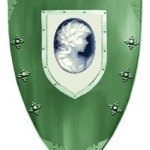 The emblem of the order was a shield of gold enamelled with green and a white lady inside. It seems reasonable to believe that the dame blanche represented the purity of women, which the knights of the order were to protect; what the green background signified is not so clear. That white and green were sometimes associated together in connection with the observances of May is shown by an account, in Hall’s Chronicle, of a “maying” of Henry VIII of England, in which the company was clad in green on one occasion and in white on another. In Machyn’s Diary, too, there is mention of a white and green Maypole around which danced a company of men and women wearing “baldrykes” of white and green.

The Enterprise of the Green Shield with the White Lady bears a striking resemblance to the so-called “White Ribbon Campaigns” of today in places like Canada and Australia that require men, as was required of the medieval knights above, to pledge oaths to “Never to condone or remain silent about violence towards women and girls” and especially to intervene when learning of any male behaving badly toward a female. The continuity of chivalry in these two examples is worthy of study in itself.

White Ribbon Canada cashes in on the suffering of children