**Trigger warning: those suffering from immense selfishness, hypocrisy, stupidity, and moral retardation cloaked as philosophy may get their feelings hurt by this article.**

Those of you who read my blog know that I have a guilty pleasure—“feminist philosophers.” This guilty pleasure is better than chocolate. They are usually a bit more challenging than typical feminists in that they at least try to obscure some of their misandry, dog-shit ideas, and immense stupidity within the container of philosophy. They are usually a bit more cunning.

However, over at “feministphilosophers,” I found this article disguised as “Some Thoughts On Epistemic Responsibility.” I’m not going to bore the reader with a discussion on epistemic responsibility. I am, however, going to show the immense selfishness, hypocrisy, and stupidity of this “feminist philosopher,” one who calls herself “Themistokleia,” named after the teacher of Pythagorus—“the father of philosophy.”

In her own words:

I have experienced attempted rape. Surely I would feel differently had my attacker been successful, but for me, what was most traumatizing was not the assault but rather what happened next. It was in a public park. I was able to get away. I ran to a man reading on a bench and told him what happened. He saw I was being followed. He offered to sit with me until it looked like it would be safe to walk home. But that was all he did (and I do mean that was all: he did not offer to take me to the police, to call any one, etc., and it didn’t occur to me to ask for those things). I sat with him for two hours on that bench in silence. In retrospect, I’m sure he just didn’t know what to do and didn’t know what to say—but in those two hours, and in some months that followed, I felt like what happened must not really matter because it didn’t seem to matter much to him. I thought that I was being silly for feeling angry, violated, and scared. In those later moments where I didn’t doubt myself, I doubted the world at large—the capacity of my fellow humans to do right, to be even minimally decent.
I don’t ever want to be the man on that bench to someone else, whether I think I know what happened or not.

This woman “ran to a man” for protection. She specifically and deliberately brought danger and the threat of harm to this man. He voluntarily allowed himself to remain in harm’s way for two hours to protect her. He was willing to offer up his male body as a sacrifice to this damsel in distress.

As such and according to our “feminist philosopher,” this man’s sacrifice was more “traumatizing” to her than assault and attempted rape. The two hours of his risking bodily harm to protect this damsel was not sufficient. He should have done more. He should have risked more for her, “but that was all he did…”

Such is the mentality of many men, women, feminists, and even feminist philosophers—people who should know better. Such is a total lack of other-awareness—total gynocentric selfishness. She was not aware of the sacrifice that this man made by allowing his male body to endure the risk of violence for two hours—all to protect her.

What if he had an anxiety disorder? What if he had PTSD and was suffering from previous experiences of violence against his body? What if he was a survivor of rape or assault and running to him for protection forced him to relive all those feelings of powerlessness, helplessness, and suffering? Selfish people like Ms. Themistokleia do not consider these other possibilities. Doing so would require something contrary to their total gynocentric selfishness: empathy.

If she wasn’t so selfish, she’d have realized that this man could have been assaulted, maimed, mutilated, stabbed, shot, or otherwise also be made into a victim of violence that she brought to him—making him responsible not only for her safety, but his as well. She was not aware of the danger that she put him in to protect her. She does not value his body at all or even care that she put this man in harm’s way by deliberately running to him for protection. She does not acknowledge, at all, his sacrifice, or the sacrifices made by men who have been cultured to perpetuate violence against men in defense of women like her.

Such are the expectations placed on men in our society—to “be a man,” be brave, and make your body an object-of-utility for women and for society in-general. She used this man, only to berate and shame him later for not doing even more to protect her. Women like this “feminist philosopher” demand obeisance and say that if a man doesn’t sacrifice enough, then he is worse than the possible rapist who tried to assault her.

This is another way in which the male body is made the most culturally acceptable locus of violence by women like “themistokleia.” As she writes her “thoughts” on the morality of epistemic responsibility, she neglects to fix her own moral retardation and hypocrisy.

As a philosopher, one would think that she’d have the clarity of thought needed to identify hypocrisy. However, as a “feminist philosopher,” she may lack the clarity needed to realize that she is simultaneously arguing for and against the actions of men who rescue damsels in distress.

As a philosopher, she is arguing that a man didn’t do enough to rescue her. On the other hand, as a feminist she believes that men who rescue damsels in distress are perpetuating the soft-sexism of benevolence—a form of white-knighting, where men rush in to rescue the poor and weak women who are believed to be incapable of defending their own stupid positions or rescuing themselves from their own stupidity. 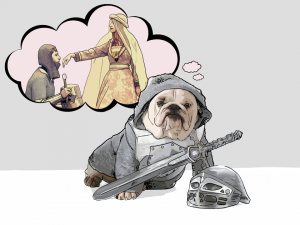 I’m not going to rescue you from your own stupidity, Ms. Themistokleia. I’m going to point at it, laugh, and enjoy it for all its guilty pleasure. Such things are better than chocolate. If you’re too stupid to see your selfishness and hypocrisy, you have no business in any philosophy department. You have no business doing any philosophy at all. The only academia for you is some solipsistic “women’s studies” department where you are free to escape any and all rigorous and critical thought.

Only there will you be free to perpetuate a culture of violence against men. There you will have the freedom to be callously indifferent to male suffering and sacrifices that are made for you by men who you don’t even know—free to be as stupid as you like.

As you wrote, “I don’t ever want to be the man on that bench to someone else,” without realizing that man on the bench was probably not too happy to be stuck there either: babysitting your sorry little ass, and probably sweating at the thought that he might have to take a bullet or knife wound on your behalf. At least the man on the bench had sympathy, compassion, and enough morality to recognize that you were in distress…and that’s a lot more morality than you have, given that you completely fail to recognize that he doesn’t owe you jack.

Fuck off with your moral retardation, Ms. Themistokleia. Also, drop the mockery you are making of Pythagoras’ teacher. You’re not worthy of the name.

Lies your teachers told you: open letter to a young woman

The Myth of Male Power