Australia recently experienced a Southern oscillation the weather bureau wasn’t expecting. As is widely known, Lauren Southern now resides in Australia. After retiring from public life in 2019 she re-emerged in 2020. On 16 August 2021 Southern had this to say on Twitter: 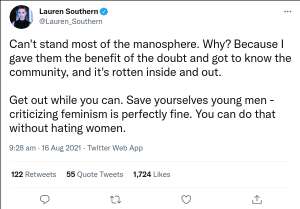 Can’t stand most of the manosphere. Why? Because I gave them the benefit of the doubt and got to know the community, and it’s rotten inside and out.

Get out while you can. Save yourselves young men – criticizing feminism is perfectly fine. You can do that without hating women.

While it is true that she said most of the manosphere she also said it’s rotten inside and out. As Peter Wright has noted “The Free Dictionary” defines this phrase to mean:

Thoroughly; down to the last detail. 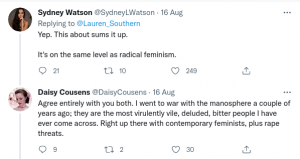 Sydney Watson went on to respond:

Yep. This about sums it up.

It’s on the same level as radical feminism.

And then Daisy Cousens followed up with:

Agree entirely with you both. I went to war with the manosphere a couple of years ago; they are the most virulently vile, deluded, bitter people I have ever come across. Right up there with contemporary feminists, plus rape threats.

I find this personally disappointing because I spoke at an event organised by Watson, the March for Men in Melbourne, Australia on 25 August 2018 and Cousens attended ICMI17.

While I’m disappointed I can’t say I’m surprised. This has been a long time coming.

Many people looking in from the outside fail to appreciate the breadth of views and outlooks that are under the umbrella of anti-feminism. Anti-feminism covers from the men’s rights movement to traditional gynocentrism and everything in between. As such anti-feminists may all agree on the problems with feminism but not much else. In particular there are widely varying views about the direction a post-feminist society should take.

Traditonal gynocentrists generally want to return to what they described as a traditional lifestyle. The lifestyle they seek seems to so often involve lunch with the girls, a spot of tennis and some housework if the maid can’t make it that week. This was not, in fact, a tradional lifestyle as most people would have recognised it in the past. Historically most women worked. So did most men and most children. The alternative was starvation or destitution. Only recently has society become wealthy enough to allow for many people to not work. In the 19th century children began leaving the workforce. Then women began to leave the workforce. Men never had that opportunity, and among poorer families women generally continued to work as well. The traditional lifestyle desired by these tradgyns was largely the privilege of women of the upper middle class and the wealthy in Western society.

Most MRAs don’t wan’t the future of the feminists or a return to the idealised past of the tradgyns. We want a new way forward. A future where we see true social and legal equality for men and women. A future where all adults bear the cost of protecting their society should it become necessary. The future that many feminists always claimed they wanted, but didn’t really.

For years a tentative alliance between men’s rights and the tradgyns held. There is a well known but ancient proverb: The enemy of my enemy is my friend. Most people on both sides probably saw it as a temporarily alliance of convenience. And it served its purpose. But for a few years now it has been clear that it was coming to an end. It is natural that as feminism continues to decline the differences between men’s rights and traditional gynocentrism would become more apparent.

Southern, Watson and Cousens must be sufficiently well informed to understand the correct meaning of manosphere. The manosphere is a term applied to a variety of movements involving men or focussed on men’s issues. In general participants in the various movements agree on the problems facing men and boys but disagree on how (or even if) they should be addressed.

We cannot just assume that Southern, Watson and Cousens were painting with too broad a brush. It is clear that they knew what they were saying.

It must then be clear that to speak of the manosphere in the manner that they did is to besmirching a huge number of people who just want a better future for themselves and for society.

Every movement has its extremists. The real test is how movements deal with them. We push our extremists to the side while far too many movements allow theirs to take centre stage.

Rather than hating women we have many women within the men’s rights movement. You can see women in leadership positions and featuring among speakers at ICMIs. I personally invited Watson and Cousens to speak at both ICMI20 and ICMI21. I didn’t get so much as a response from either of them. Vile indeed.

Every Southern Oscillation passes with time. The future is bright for men’s rights as we slowly but surely chip away at the monolith of gynocentrism. I repredict a very different future for those that would throw us under a bus today. Beauty fades and with it attention. In the end only ideas survive.

By now most readers of AVfM will have watched Vernon Meig’s video on the topic. Vernon invited me to participate in his video. I want to thank Vernon for inviting me to participate. Alas circumstances did not allow, so an article will have to do.

Robert is concerned for the welfare of men and boys in modern society. In particular he is concerned about the effects of widespread misandry in society and gender biases in addressing domestic violence and intimate partner violence. He advocates for men's rights for the next generation of men and women. Robert is the president of the Australian Men's Rights Association Inc and is the owner and publisher of A Voice for Men.
PrevPreviousLate-Stage Feminism and the Rise of the PUA
NextLetter to Washington Post on ‘The Wage Gap’Next
Menu