Right from the start, Nevada was something of an outlier among the states of the union.  Though Nevada Territory had nowhere near the 60,000 inhabitants supposedly required for statehood in 1864, the Union stronghold was hurriedly admitted on October 31, 1864 so two more electoral votes (the 16,420 popular votes cast were the fewest in the union; even minuscule Delaware had more voters) could be tallied for President Lincoln, whose reelection was in doubt.

Silver mining brought Nevada to the nation’s attention, but before the end of the 19th Century, another lucrative industry developed.  Unlike mining, this industry was decidedly gynocentric, as many American men found out to their detriment.

In Nevada, as in the states previously admitted, the rules of marriage and divorce were a state matter.  Notably, Nevada did not require a lengthy residence period to qualify for a divorce petition.  Another interesting facet of Nevada was its de facto no-fault divorce laws.   Technically, divorces were not available for the asking.  On paper, a petitioner still needed grounds.  “Extreme cruelty” was the most popular.

While “extreme cruelty” might evoke images of “enhanced interrogation” at Guantanamo or a medieval torture dungeon, in truth the courts had a much lower standard.  As one magazine writer put it, “Spend a few days in a Reno divorce court and you will have enough novel definitions of ‘extreme cruelty’ to fill a page in the dictionary.” 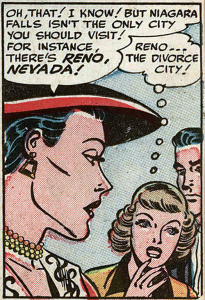 One only had to reside in Nevada for six months to be a legal resident.  Upon being divorced, the born-again bachelorette had to aver her intention to remain a resident of Nevada.  Obviously, most of the newly divorced women headed home as soon as possible.  A speedy evacuation after a divorce was a nudge-nudge, wink-wink infraction.

Some of the women, however, stuck around long enough to get hitched again.  Another of Nevada’s peculiarities was the lack of a waiting period to get remarried.  A number of women had a new man waiting in the wings.  It was not unusual for a woman to get divorced in the morning and remarried in the afternoon.

While other states were not happy about the Reno divorce mill, there was nothing they could do about it.  The Full Faith and Credit clause of the Constitution required that other states honor the decrees of the Nevada courts.  (A lot of these issues came up again in Obergefell v. Hodges, the 2015 Supreme Court decision sanctioning homosexual marriage nationwide at a time when some states permitted it and others prohibited it.)

Not all Nevadans were happy with their state’s reputation as a divorce mill.  So in 1913 a reform movement succeeded in doubling the residency period to one year.  Predictably, legal fees dwindled, as did local occupancy rates at hotels and resorts.  So in 1915 the six-month residency period was restored.  In 1927 the residency requirement was slashed to three months.  When the Depression cut into business in 1931, the period was slashed to a mere six weeks.  Statewide legalized gambling also sweetened the pot that year.  Consequently, Reno survived the Depression better than most cities.

Given the size of Nevada (100,577 square miles), Reno was the only realistic destination for divorcees in training, as it was the largest city in the state and railroad access was good.  (Reno was on the route of the Central Pacific in the building of the first transcontinental railroad, commemorated by the famous Golden Spike ceremony in Utah in 1869).  Located in the foothills of the Sierra Nevadas, Reno was near the Comstock silver mines, Lake Tahoe, and Carson City, the state capital.   In 1870, Reno had but 1,035 people, yet it was the largest city in the state (a mere 42,491 according to the U.S. census).

By the 1890’s the prominence of the “home-breaking industry” in Reno was obvious to anyone visiting the town.  Leon Ray Livingston, a celebrity hobo popularly known as A No. 1, visited the town in 1894 with Jack London, then just 18 years old and becoming acquainted with life on the road:

A telling majority of the seekers for divorce were women.  Back home the grounds they had to advance for an application of separation from their life’s mate either was too scandalous for an airing in a public court or would not stand the test of the local laws.  A few months of legal residence was all the state of Nevada required to grease the slide into single-blessedness and, at the same time, the pocket-books of the lawyers and others financially interested in the flourishing of the divorce enterprise.

There was one outstanding feature which most impressed Jack London and I while we were sightseeing in town.  This was the unusual number of lap dogs and other nasty creatures taken out for an airing by members of the Reno divorce colony or their maids. Precious few of the women, all of whom were attired in the most expensive creations of Parisian fashion, were encumbered with babies.

Remember, this was long before female emancipation was a given.  Suffragettes were stalking the land but the 19th Amendment giving women the vote was 25 years away and stigma was still attached to divorce.  Thanks to the relative rarity of divorce in other states, Reno became synonymous with divorce.  If a woman announced she was taking a trip to Reno, it was understood that she was not talking about a vacation.

The Reno experience was largely the province of well-to-do women.  The average disenchanted housewife could hardly afford train fare to Reno, much less pay for lodging for the requisite amount of time – particularly after the Panic of 1893.

Consequently, the roster of women granted divorces in Reno is something of a who’s who.  Socialites, heiresses, and movie stars were abundant.  Among the Hollywood migrants casting off their spouses were Tallulah Bankhead, Constance Bennett, Paulette Goddard, Jane Greer, Rita Hayworth, Miriam Hopkins, Carole Lombard, Myrna Loy, Ida Lupino, Maureen O’Hara, Mary Pickford, Lillian Roth, and Lana Turner.  So many well-to-do women migrated to Reno that the outlying dude ranches that catered to them were popularly known as divorce ranches.  The cowboys who worked on those ranches were surely full of titillating anecdotes.

If Reno was the city where marriages went to die, Niagara Falls, a popular honeymoon destination, was where matrimonial relationships were nurtured.  Most young couples went through Buffalo, the gateway city to Niagara Falls, because it was easy to reach via train.  The two upstate New York cities intersected in the popular ditty “Shuffle Off to Buffalo,” written by Al Dubin and Harry Warren.  The song was introduced in 42nd Street, a 1933Warner Brothers musical with classic Busby Berkeley choreography.

The song begins with a young couple planning their honeymoon:

All well and good.  The young couple radiates bliss, joy and optimism.  But a couple of verses later, a jilted, jaded woman chimes in:

So the American man was screwed coming and going.  He got fleeced paying for a honeymoon in Niagara Falls and later got fleeced by the divorce courts in Reno, dubbed “The Biggest Little City in the World” (thanks to a slogan contest) in 1929.  Holy matrimony, Batman!

In its heyday, Reno had no serious competition for divorcees, as Las Vegas was just a dot on the map and was harder to get to.  Legalized gambling also aided Las Vegas, however, and as lodging and entertainment options grew in southern Nevada, they took away some of the Reno divorce trade.

Las Vegas surpassed  Reno as the state’s largest city in the 1950’s, but the divorce rate went down in the 50’s, and by the time it started going up again, the liberal reforms in other states rendered the Nevada divorce pilgrimage unnecessary  Much the same is true of casino gambling, but the glitzy shows and sumptuous resorts of Sin City remain unmatched by more pedestrian locales.

Now with 260,000+ people, it is arguable whether Reno is still “The Biggest Little City in the World” but it is no longer the Divorce Capital of America.  Still, with more than 425,000 people in metro Reno, there are enough locals to keep a fair number of Washoe County divorce lawyers employed.

Looking back over the Reno phenomenon, one can only wonder how many men’s bank accounts were pumped dry by shysters.  In addition, how many hoteliers, ranchers, restaurateurs and others in Reno were enriched by shearing men from other states?  Fittingly, sheep farms, thanks largely to Basque immigrants, were a big part of the Nevada landscape in the old days.

Unlike divorce courts today, the judges and lawyers who manned the Reno divorce mills were just that – men.  One wonders if any of them ever stopped to ponder what they were doing to their fellow men.  I’d like to think that Nevada lawyers and judges had misgivings about their profession and maybe a few of them repented and found other means of making a living.

Then again, I’d like to believe Area 51 houses space aliens from the Roswell UFO crash.