In 2013 Martin Scorsese made a movie called The Wolf of Wall Street.  As was the case with his gangster movies, the film portrayed men behaving badly and enjoying every minute of it…until they received their comeuppance in the last act.

It would be interesting to know what Sallie Lee Krawcheck thought about the movie.  Who is Sallie Lee Krawcheck?  “The most senior woman on Wall Street” is a financial guru with an appropriately impressive resume, including top management gigs at Merrill Lynch, Smith Barney, Citigroup, and Bank of America.  Her experience, however, left her with a dim view of the Wall Street “boys club.”  In fact, she was so disgusted she started Ellevest, an investing platform of women, by women, and for women.  Since “elle” is French for “she,” I guess we could dub Krawcheck the She-Wolf of Wall Street.

Now there is nothing wrong with setting up a service that focuses on women.  Any number of businesses do that.  Some products or services are more likely to be of interest to women than men.  Besides, as has been often noted, women control the purse strings, accounting for the lion’s (the lioness’s?) share of purchases in America.  Krawcheck, however, feels that, “The biggest money mistake that women tend to make is that we are not investing as much as men are.”

Another way to say that is that women spend too much and have nothing left for investing, but woman as shopaholic spendthrift is a terribly unflattering stereotype.  Stating that investing is good and men are more likely to do it is tantamount to admitting that men are doing something right and women are doing something wrong.  One has to tread carefully in that regard. 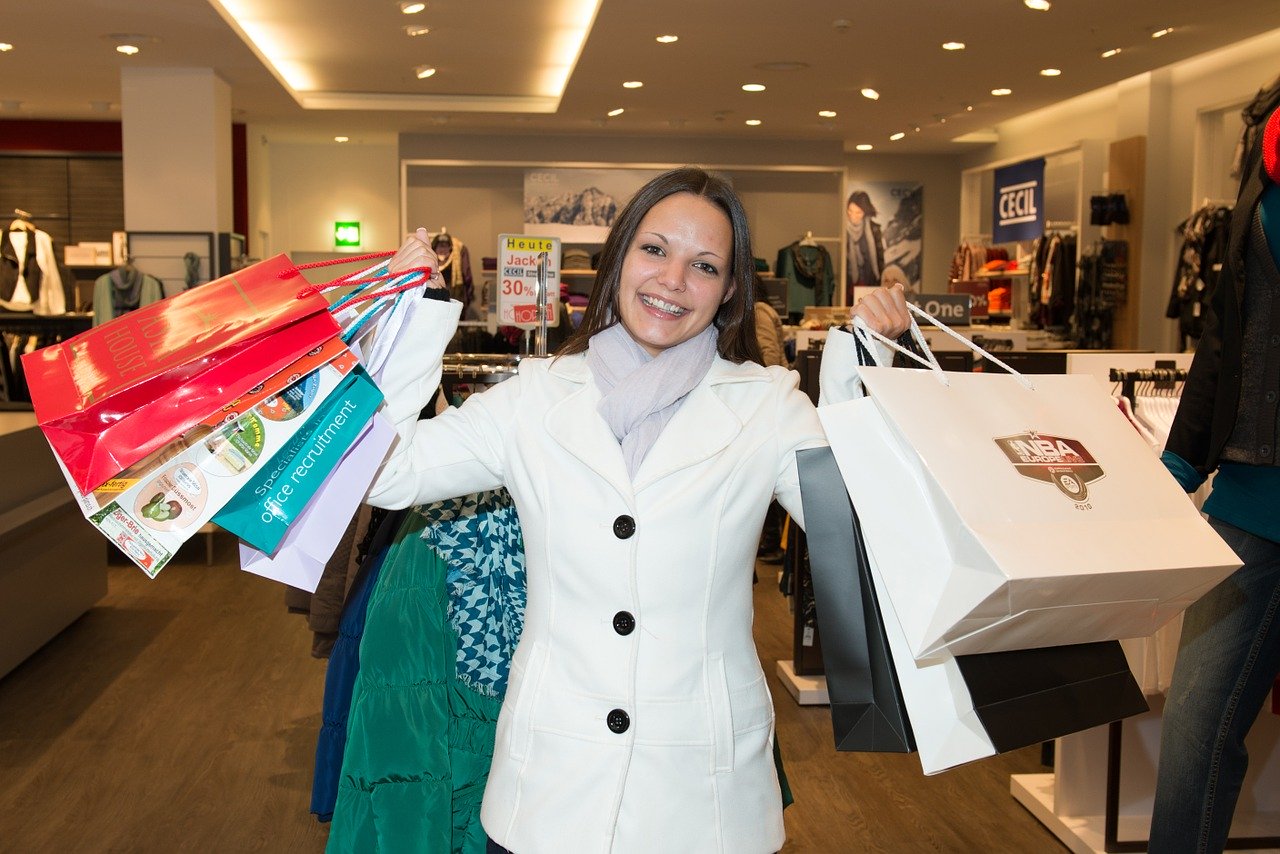 Krawcheck says that good investing can make a bigger dent in your net worth than pay raises.  On average, for all its volatility, the stock market has gone up 9.5% every year since the 1920s.  Chances are your paycheck hasn’t kept pace.  Something both women and men should keep in mind.

Also, women’s life spans and earning curves differ from men’s.  Did you know that salaries peak at age 40 for women, and at age 55 for men?  (Curse you, gender pay gap!)  At any rate, since women tend to live longer than men, that dictates a different investment strategy.  Of course, any good financial advisor will take into account your financial vitals…your age, your income, your debts, your family status…and make recommendations accordingly.  So why not your sex?

Sounds reasonable enough, and given the myriad of investment funds out there with different goals and missions, a fund for women doesn’t sound too far out…until you look at Krawcheck’s Ellevest web site.  You can’t help but come away with the idea that Occupy Wall Street has morphed into Infiltrate Wall Street.  The recurring term “Disrupt Money” is an umbrella phrase for such topics as:

What Can Companies Do to Move Forward in Gender Equality?
4 Ways to Raise Our Children to Be Financial Feminists.
Stand up for paid family leave
Help your company close its own gender pay gap.
Finding women-owned and women-run companies.

Naturally, there are investment funds out there to facilitate the above.  Consider the Pax Ellevate Global Women’s Leadership Fund and the SPDR SSGA Gender Diversity ETF (exchange-traded fund).

Krawcheck invites visitors to her web site to “Invest like a woman.”  This sounds like a straight line in search of a punchline, but I’ll leave it to you to fill in the blank.

She also informs us that “86% of Investment Advisors Are Men, With an Average Age of 50+”…to which one might want to reply, “So what?”  But you can’t utter those two words in response to any of the grievances of the protected classes lest you be vilified as a fascist at worst or insensitive at best.

When it comes to equity in financial matters, Krawcheck conveniently overlooks a few things.  Of course, you’ve heard of the wage gap, and no matter how many debunkers drive stakes through its heart, it refuses to die.  A few men’s groups have responded by pointing out the tax gap, the difference between what men and women pay in taxes and the difference in what they get out of those tax payments.  But what about the inheritance gap?

The Forbes list of the 400 Richest Americans in 2019 is overwhelmingly male.  The list, overwhelmingly male, is headed by the usual suspects…Jeff Bezos,. Bill Gates, Warren Buffett, Mark Zuckerberg.  The first woman on the list is No. 11, Alice Walton with $51.4 billion.  In the “Sources of wealth” column (in Wikipedia, but not Forbes) it says “Walmart, inherited.”  Admittedly, the same is true of her brothers, Jim Walton and S. Robson Walton, who are neck and neck with her on the list.  According to Forbes, she is more interested in art (she is chairwoman of the board of the impressive Crystal Bridges Museum in Walmart’s hometown of Bentonville, Arkansas) than the family business.  (All rather ironic for those of us who remember The Waltons, an old TV series about a poor but honest family in the Blue Ridge Mountains during the Depression.)

Now let’s go down the megabucks list to Julia Koch in No. 13 with $41 billion.  Where did her wealth come from?  “Koch Industries, inherited.”  OK, so the two richest women in America inherited their fortunes…mere coincidence?  Let’s keep going.

No. 15 is MacKenzie Bezos.  Her Wikipedia bio calls her an “American novelist and philanthropist.”  Who knew there were big bucks in those two pursuits?  She is not an heiress, but her divorce settlement from Amazon’s Jeff Bezos (who is No. 1 on the list at $114 billion) amounted to $35 billion. Not a bad reward for 26 years of marriage (it works out to $1.35 billion per year).  Of course, she might have gotten more if she’d just waited for hubby to croak, but there’s always the chance he might outlive her.  Better to bail out early and go with the sure thing.

The next woman on the list is Jacqueline Mars, No. 18 with $23.5 billion, the result of her being born into the Mars candy family.  That’s a lot of Milky Ways, M&Ms, Skittles, Snickers, and Twix, probably enough to induce a diabetic coma in the entire population of a medium-sized American city.  Again, to be fair, she was not alone, as her brother John Mars, also benefited from America’s sweet tooth.

Next we come to Laurene Powell Jobs & family with $21.3 billion.  Jobs, eh?  You don’t suppose she was married to…that’s right, Steve Jobs.  She inherited billions of bucks of Apple and Disney stock from him!

Next with a paltry $14 billion is Abigail Johnson, CEO of Fidelity Investments.  I’ve no doubt she is financially savvy, but she took over from her father as CEO, and her grandfather founded the firm.  Not quite an inheritance, but I wouldn’t call her a self-made woman.

Worth a mere $8.5 billion is Christy Walton in 58th place (right behind George Soros and Jimmy Jones).  There’s that name Walton again.  This time around, however, it’s a case of marrying money.  She was the wife of John Walton at the time he died of a plane crash in 2005, and hence an in-law of the aforementioned Waltons.

Rounding out the top 100, we find more people with the surnames Walton and Mars.  Also, a number of women’s names appear alongside their family’s name or their husband’s names, and there is the occasional widow who runs the show – often capably – after her husband’s demise.  I’m sure eventually there must be a woman on the list who was not dependent on a man in some form or fashion to jump-start her wealth, but by now I think my point is obvious.  Women spend lots of money, and on occasion excel at managing money, but the creation of wealth is overwhelmingly male.  Given a typical bell curve distribution, this should not be surprising, since men appear at the extremes more frequently than women.  Also, typical male traits come into play…the role of being a good provider, objectivity, ambition – every one of them reeking of toxic masculinity…unless you stand to benefit from the wealth they amass.

Now very few women are fortunate enough to marry billionaires or to be born into the families of same.  But many women do inherit money from mere millionaires or from men with lesser assets.  Remember, women live longer, so they are more likely to inherit money than to bequeath it.  The same can be said of life insurance.  Women are far more likely to get a payout from that than their husbands.  And let’s not forget Social Security.  Countless widows, even if they were stay-at-home moms, have received benefits checks courtesy of their late husband’s payments into the system.  So women really don’t have anything to whine about…but squeaky wheels tend to get addicted to grease.

There’s nothing illegal about inherited wealth or windfalls, but in leftist circles there is tinge of shame to them, as they raise the issue of unearned privilege.  Of course, Ellevest conveniently sidesteps these sources of income – even though they provide ample fodder for investments – because, goshdarnit, they just don’t fit the female injustice/inequity paradigm they’re pushing.

No matter how woke the Ellevest folks purport to be, to survive they must make money for their clients.  If Ellevest fails to attract male clients, it is severely restricting potential funds. I seriously doubt there are that many “woke” men out there looking for a female-friendly social justice investment vehicle. In fact, I  suspect the majority of women investors are mainly concerned with making a buck, not with social change. There may be a niche market of woke women out there but probably not not enough to keep the likes of Ellevest afloat. In that case, Krawcheck has an escape hatch: Ellevest’s failure (or at least underperformance) will be men’s fault for choosing to invest in “socially irresponsible” funds.

Krawcheck herself, however, is not totally bulletproof in the SJ skirmishes.  To a large degree, her target audience is affluent women, who, like herself, are far more likely to be white.  She can’t come right out and say that, but if you’re going fishing, you go where the fish are.  After all, women who live paycheck to paycheck don’t have discretionary funds for investment, so there’s no sense in making a pitch to them.  Consequently, WOCs (women of color) are largely underserved.  And let’s not forget trans women!  They have special needs too…but don’t call them special needs people.

Ah, but comes the revolution and all women will be empowered and gender equity will be manifest in all walks of life…or will it?

Remember, you can lead a woman to the stock exchange but you can’t make her invest.

PrevPreviousFrom Peterson to Incels: is there a generation of ‘lost boys’?
NextDomestic abuse by women triples in a decadeNext
Menu