My Shout from the Pigeonhole: Review of Dr. Michael Kimmel’s Talk at Kennesaw State University

A recording of the speech is available on MediaFire, as is an interview ad-libbed by a Zen Men volunteer. I cannot possibly cover all of the material in one article, so I encourage everyone here to listen to the speech while taking a drive or cleaning the house.

The thesis of Kimmel’s speech is that men and women are more similar than they are different. Kimmel’s fans were nodding in sync to waves of validation, as evident by the googol sounds of “Mm-hmm!” or “That’s Right!” every time Kimmel verbally punctuated sound bites. As an architect of manufactured context that would give M.C. Escher motion sickness, Kimmel reports arguments that seem plausible only to those unaware of how ideological paradigms distort the scientific method.

Kimmel’s presentation “Mars, Venus, or Planet Earth?”* proves how important it is to know the difference between presenting a cogent argument and framing a discussion to make any dissent look wrong. Marketable sentiments easily make many a kind man too conflicted to even play devil’s advocate.

Kimmel beats old drums, from praising Women’s History Month as a marginalized event beside 11 Men’s History Months, to telling men that they will get laid more if they just stop being so stubborn and support gender equality. This, to me, sounds like telling an obese person that bakers will sell them cheaper cakes if they support laws that help local businesses.

Pro-feminists view a smiling older white man’s flagellation of masculinity as a gesture of humble affirmation, so long as they forget that Kimmel said that women are more similar than different to his targets of criticism.

It is unfair of me to focus more on a person than the point, but I must shout from a pigeonhole and mention the man who puts people like me inside of it. What makes Kimmel difficult to challenge is not his claims, but rather his ability to execute Gish Gallops around a regulated, if not already dogmatic audience.

As a white, good-looking, intelligent (and clearly humble) male college student between the age of 16 and 26, I am a citizen of Guyland, and not my own person. Even though I am a strong advocate for gender equity, gay’s rights, anti-racism and generally an individual’s right to choose, I am still the next “angry white man” if I make one wrong step on the minefield. Despite Kimmel’s appeals to curiously contrived data, it seems that a specious understanding of historical social contracts defines a man’s credibility. After emphasizing his dependence on hard data, Kimmel never accounts for missing contextual information from his presentation.

As Kimmel reminds us that he is a social scientist, I find myself wondering about his credentials as a historian or a psychologist. Kimmel asserts historical oppression of women, and my thoughts go to the 18th century female blacksmiths who worked in a “male” profession:

Guests expect to see women cooking, cleaning, sewing, and raising and educating children in the home, and are understandably perplexed by a female swinging a hammer at a forge or planing a board at the cooper’s. This curiosity often leads to questions of political correctness versus historical accuracy.

–History.org, “With All the Grace of the Sex“

Never mind the authoritative role women historically played in the private sphere, the murderous contempt for wife-beaters before 1853 (hat tip to St. Estephe for the reference), and the sexual power of women over men back during the days of Lysistrata!

Politically, women influenced men in government, proving that power was not always about titles in a formal hierarchy. Kimmel also states that women died getting the right to vote. This brings to mind suffragette Emily Davison’s stepping in front of race horses to the horror of jockey Herbert Jones, who expressed remorse over Davison’s death like an oppressive bastard obviously would. Never mind that the greatest opponent to suffrage was other women, not the men who approved the new state of affairs.

That aside, today women are the majority voter in most developed Western nations since the 1980s [1][2][3], which brings questions as to why male predominance in government persists. Kimmel stood on stage saying that his data shows what men want, but does voter turnout data not show what women want in political leaders?

I just can’t see any form of hegemonic masculinity in a society where women decide what titles men wear in government, and I don’t see any of these contraindicators in Kimmel’s analyses on institutional or structural discrimination. Is power simply seats in offices?

Women dealt with flawed social contracts and human rights violations, but so has every other demographic. A focus on women’s suffering is a matter of salience, and there is no evidence to suggest that women were uniquely targeted in the manner suggested by prigs.

The race element of our pop history lesson is also rich with topics that render dissent taboo. In presenting history, a demagogue is now obligated to cite the antebellum slavery of the U.S. South as if it was the only period of slavery that ever existed. Arabian slave owners, white slaves, African slave traders, and trafficked children certainly do not capture the whole context either, but one must ask why Kimmel glosses over whatever does not confirm the perplexing “Bad whitey, no Ferrari!” approach to combating racism.

I’d like to offer a hypothesis on the nature of Kimmel’s narrative, and this is best done from a brief tangent:

When observing how people behave, it’s not enough to ask why they choose to do what they do; you must also ask why they did not choose an alternative. When I observed fundamentalist Christians of the Westboro Baptist Church variety target gays with hate speech, I asked myself why they rarely (if ever) target other groups that were clearly more offensive to their ideology such as swingers, BDSM enthusiasts, or openly Satanist purveyors of alternative culture. Instead of seeing hyper dysfunctional gang wars between exorcist brigades and Slayer fans—which would make for a damn good movie—, I see a bunch of intolerant people wrongfully prosecuting innocents like founder of modern computer science Alan Turing, and Damien Echols of the West Memphis Three. These men didn’t do anything wrong, they were just “different” around the wrong people.

I think that ideologues attack people who are, one, easy to pick on, and two, easy to frame according to a bigoted paradigm. Case in point: Gays are generally awesome people who mean no harm, which to me suggests why Abrahamic fundamentalists harass them, and not the Lovecraftian cult trying to summon Cthulhu using a goblet of month-old menstrual blood. Gays aren’t scary, and some people give them a hard time because they think God approves. Whatever.

Similarly, I do not see feminists swarming strip clubs to protest objectification as much as I see them sexually abusing men trying to protect their church from vandalism, yelling at people who want to talk about issues affecting boys, attacking the jobs of IT professionals for making a “dongle” joke and reducing a scientist to tears for wearing a shirt depicting scantily-clad women.

Even if my stated examples do not represent the whole of feminism, the point is that bullies don’t pick on people their own size.

Kimmel chose the life of a demagogue, which in my mind is a kind of bully. He picks on easy targets for political bashing. In a system that benefits whites and men so much, both Kimmel and his groupies seem oddly comfortable taunting it as if they know there will be no retaliation. If a pro-feminist worldview is growing as rapidly in academia as Kimmel claims, then where is this systemic oppression I keep hearing about? I certainly see systemic oppression against blacks in law enforcement and criminal court proceedings among other things, but certainly no threat to a profitable narrative pushed by feminists and social justice activists.

Through selective omission, Kimmel frames the discussion so that when a man, a white, or a white man dissents, Kimmel giddily Leans In™ to lecture the oblivious, entitled soul about how blind he his to his privilege from a position of academic prestige. So long as the selectively-applied memes of “privilege” and “Angry White Men” exist, all Kimmel has to do is draw an association to silence a critic in a room full of judgmental onlookers. After creating this environment, Kimmel claims to want a discussion.

Kimmel claimed that only about 5-6% of men commit sexual assault. In a world of “1 in 3s,” “1 in 4s” and “1s in 5s,” I desperately wanted Kimmel to connect the world of 20-33% female victims of sexual assault—that Sen. Kirsten Gillibrand’s staff silently stopped reporting—to a world of 5-6% male perpetrators. Not even Evel Knievel would jump that gap if he was still alive.

During the Q&A, a Zen Men volunteer asked Kimmel if men could be trusted to pursue truth and justice without the guidance of feminism. Kimmel’s response was a display of linguistic contortion that, if rendered on paper, would resemble David Lynch and Frank Gehry designing a NASCAR track over a drunken game of Twister. The good news is that Kimmel’s answer was “Yes.” I think. 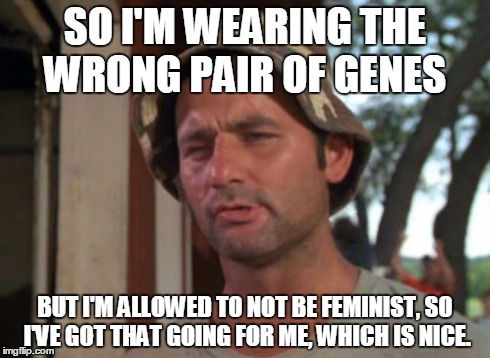 If Anita Sarkessian taught us anything, the profit margins for emotional manipulation are massive. Ideologues do not sell a service, they sell a message. History repeats itself, and with each cycle comes people in new hats that make money promising everything, but delivering validation instead of solutions. It was only courtesy that kept me from snatching Kimmel’s microphone and yelling news of freedom a la my dream ending to Logan’s Run.

Kimmel makes no mention of the responsibilities women have towards building an equitable world, and instead places the entire burden on men. To add insult to injury, Kimmel hangs pussy on a stick and waves in front of men’s faces as if to say “If you big, silly lugs just care about equality, maybe you’ll get more of this! Do the dishes and spend more time with your kids, that is, if a judge hasn’t already told you that you can never see them again!”

I would happily accept Kimmel’s empirical (?) data if I did not suspect it was a constellation of picked cherries presented as indications of a cultural habit. Feminist academicians abused early pioneers of domestic violence researchers Murray Strauss, Susan Steinmetz, Richard Gelles and Erin Pizzey, and fought to exclude awareness of male victims brought by Dr. Adam Jones in the peer-review process.

I am somehow unable to trust sources cited by a feminist orthodoxy that excommunicates inconvenient truths, especially by a man who sees me as an angry “almost-man” (to borrow language from Guyland) pining for approval . As a 4.0 student with a distinguished degree in my near future, I have nothing to prove to anyone, be they from the imaginary Guyland, or the feminist academy. I’ve proved to myself my capacity to think, and I reject Kimmel’s insinuation that men are entitled, insecure lost souls that are somehow both incompetent enough to seek approval from the drunken fratboy in Guyland, and powerful enough to uphold a society-shifting “Guy Code” that corrupts adolescence as we know it.

If Kimmel wants a discussion, he needs to admit that anatomy is not destiny in a shared quest for equity. Otherwise, empathy for men will remain lacking in genders studies classrooms everywhere.

* On an interesting tangent, one of my first contributions to A Voice for Men is a poster bearing a similar message to the title of Kimmel’s speech.

Editorial note: Please help AVFM continue to provide you a quality website, and to change the public discourse on gender to one more rational and sane. –Eds