Mother Jones did a 6000 word piece on the Men’s Human Rights Movement and got it wrong in so many ways, and left out so much crucial information, it’s hard to know what to say. Here’s a comment I left on the article:

The namesake of this magazine is Mary (Mother) Jones, a woman who stood up for the rights of men. ​Her husband was an ironworker and organizer of the National Union of Iron Moulders. After​ his early death Mother Jones honored her husband by becoming a highly successful union organizer fighting for the rights of working men. She dedicated her life to helping men get a fair deal and did so with great gusto and aplomb. Far from a suffragette she is often quoted as having said “You don’t need the vote to raise hell.”

The irony of this article is overwhelming.

​The real Mother Jones fought for the rights of men who worked in the death professions. That is, those jobs that have a very high mortality rate. The jobs that are populated almost entirely by men who are sacrificing their own safety in order to provide for their families and loved ones. Workplace death is actually one of the many men’s issues that the author omitted from bringing up in this article. Rather than compliment the people who are working towards helping with this issue and these men her article instead attempts to denigrate and marginalize those working for the human rights of men and boys by name calling those folks haters and trolls. I do wonder if Ms. Blake thinks of Mother Jones as a hater and troll? 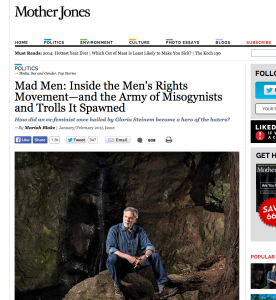 Yet, despite her radicalism, Mother Jones was no feminist.   She did not support the suffrage movement, arguing that “you don’t need a vote to raise hell.”  Though she was correct when she pointed out that the women of Colorado had the vote and failed to use it to prevent the appalling conditions that led to labor violence, this should not have negated women’s inherent right to a voice in government from one who had also frequently quoted the Declaration of Independence.  Indeed, Mother Jones even argued that suffragists were naïve women who unwittingly acted as duplicitous agents of class warfare; she wrote in 1925 (after national suffrage had been achieved) that “the plutocrats have organized their women.  They keep them busy with suffrage and prohibition and charity.” – Doris Weatherford. American Women’s History: An A to Z of People, Organizations, Issues, and Events (Prentice Hall, 1994), 190-191.

The author of the Mother Jones article starts off with a huge cheap shot. In the first paragraph she tries to associate a murderer with the activists she is about to describe. There is literally no evidence that Eliot Rodger was in any way associated with the Men’s Human Rights Movement but facts don’t stop Ms Blake. Right off the bat she loses credibility by pulling such a low-minded trick. Just imagine an article about the original Mother Jones that mentioned an unrelated murder in the first paragraph. It’s hard to imagine.

The majority of the article reads like a soap opera. She talks more about the personalities of those involved rather than the issues at hand. In over 6000 words she never discusses any of the numerous issues men face for more than a sentence. That is remarkable.

It is also remarkable how she fails to mention the important work being done by A Voice for Men. And of course, she fails to mention that a good portion of those at that site and who presented at the 1st International Conference on Men’s Issues in Detroit last June were women. Women who see the flagrant bigotry that Blake prefers to simply ignore. This might be more excusable if Blake had a short deadline but that was not the case. She has spent hours and hours, weeks and even months interviewing people about this and is totally aware of the issues at hand (including the workplace death issue) but has consciously chosen to not bring them up.

That wouldn’t go so well with her personal misandrist theme of haters and trolls.

I think a better name for this magazine might be Mother Dworkin.