The Wisdom of Odysseus

The story of Odysseus’ confrontation with the Sirens was written almost 3000 years ago, but remains as instructive for men today as is was back then – the message being to resist our primal urges and opt for the more rational approach.

The scene takes place during an ocean voyage where Odysseus and his crew are assailed by sweet-singing Sirens who come disguised as beautiful young women with the aim of deceiving them. By singing beautiful songs the Sirens would lure sailors to shipwreck on the rocky coast of their island, after which they would kill the men and feast on their flesh. In a demonstration of MGTOW ingenuity, Odysseus advises his crew to put wax in their ears, and has himself tied to the ship’s mast to stop him being lured into the Sirens’ trap. 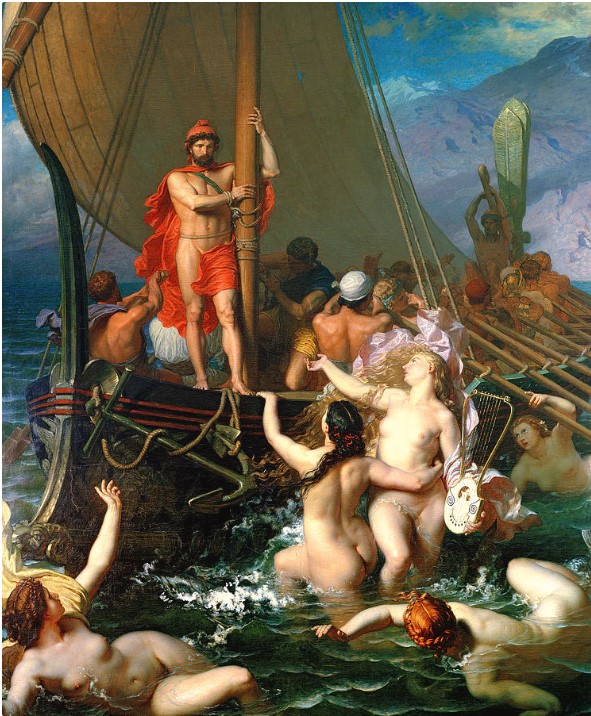 The Sirens were later encountered by the Argonauts who passed by unharmed with the help of the musician Orpheus who drowned out the Siren’s bewitching songs with his own music. The Sirens were so distressed to see a man hear their song and yet escape, that they threw themselves into the sea and drowned. – PW

The Goddess Circe advises Odysseus about the deadly Sirens

“‘So far so good,’ said she, ‘and now pay attention to what I am about to tell you—heaven itself, indeed, will recall it to your recollection. First you will come to the Sirens who enchant all who come near them. If any one unwarily draws in too close and hears the singing of the Sirens, his wife and children will never welcome him home again, for they sit in a green field and warble him to death with the sweetness of their song. There is a great heap of dead men’s bones lying all around, with the flesh still rotting off them. Therefore pass these Sirens by, and stop your men’s ears with wax that none of them may hear; but if you like you can listen yourself, for you may get the men to bind you as you stand upright on a cross piece half way up the mast, and they must lash the rope’s ends to the mast itself, that you may have the pleasure of listening. If you beg and pray the men to unloose you, then they must bind you faster…

“Here she ended, and dawn enthroned in gold began to show in heaven, whereon she returned inland. I then went on board and told my men to loose the ship from her moorings; so they at once got into her, took their places, and began to smite the grey sea with their oars. Presently the great and cunning goddess Circe befriended us with a fair wind that blew dead aft, and staid steadily with us, keeping our sails well filled, so we did whatever wanted doing to the ship’s gear, and let her go as wind and helmsman headed her.

“Then, being much troubled in mind, I said to my men, ‘My friends, it is not right that one or two of us alone should know the prophecies that Circe has made me, I will therefore tell you about them, so that whether we live or die we may do so with our eyes open. First she said we were to keep clear of the Sirens, who sit and sing most beautifully in a field of flowers; but she said I might hear them myself so long as no one else did. Therefore, take me and bind me to the crosspiece half way up the mast; bind me as I stand upright, with a bond so fast that I cannot possibly break away, and lash the rope’s ends to the mast itself. If I beg and pray you to set me free, then bind me more tightly still.’

“I had hardly finished telling everything to the men before we reached the island of the Sirens, for the wind had been very favourable. Then all of a sudden it fell dead calm; there was not a breath of wind nor a ripple upon the water, so the men furled the sails and stowed them; then taking to their oars they whitened the water with the foam they raised in rowing. Meanwhile I look a large wheel of wax and cut it up small with my sword. Then I kneaded the wax in my strong hands till it became soft, which it soon did between the kneading and the rays of the sun-god son of Hyperion. Then I stopped the ears of all my men, and they bound me hands and feet to the mast as I stood upright on the cross piece; but they went on rowing themselves. When we had got within earshot of the land, and the ship was going at a good rate, the Sirens saw that we were getting in shore and began with their singing.

“‘Come here,’ they sang, ‘renowned Odysseus, honour to the Achaean name, and listen to our voices. No one ever sailed past us without staying to hear the enchanting sweetness of our song—and he who listens will go on his way not only charmed, but wiser, for we know all the ills that the gods laid upon the Argives and Trojans before Troy, and can tell you everything that is going to happen over the whole world.’

“They sang these words most musically, and as I longed to hear them further I made signs by frowning to my men that they should set me free; but they quickened their stroke, and Eurylochus and Perimedes bound me with still stronger bonds till we had got out of hearing of the Sirens’ voices. Then my men took the wax from their ears and unbound me.