Feminist memes give us a real glimpse into the twisted logic and bigotry of feminism.  Created by feminists, reblogged, re-tweeted, and shared by feminists in their online feminist communities. They often variously show an hysterical over-sensitivity to women, and a cold indifference or hatred against men.  We’re used to seeing the “Men are pigs!  What do we do with pigs?  WE CASTRATE THEM!”  style memes.  Or a meme explaining why we must unite to end fathers day, or why sexual torture and genital mutilation against men is hilarious feminist humor.  Then there are the illogical and just plain silly feminist memes that hateful angry feminists just nod their heads at and click like on.

One such meme is this one: 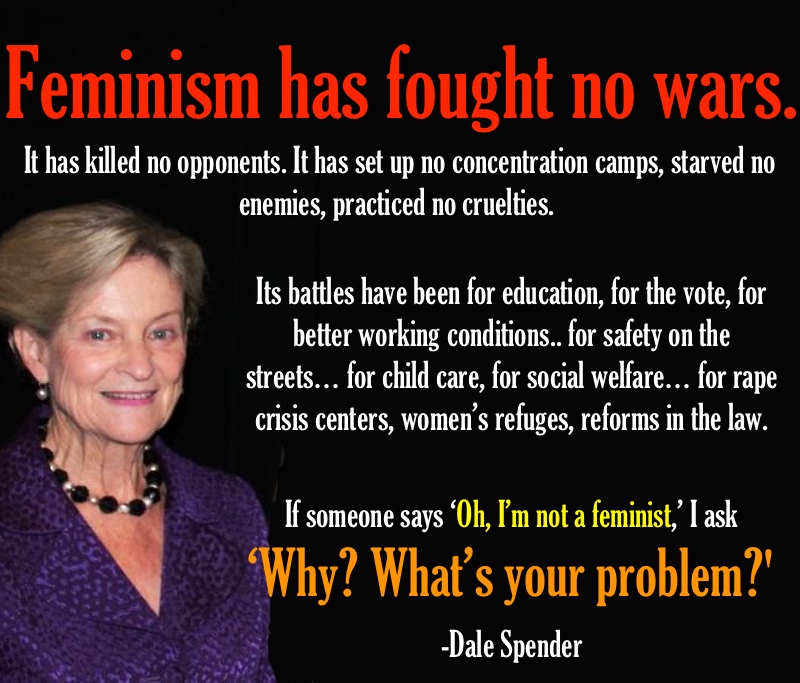 Let’s examine it.  “Feminism has fought no wars. It has killed no opponents. It has set up no concentration camps, starved no enemies, practiced no cruelties.”  This is just plain wrong and a bit absurd, but let’s take this at face value.  Neither has Buddhism,  or scientology, or supply side economics for that matter.  Would it make sense to bully dissenters to these ideologies by screeching “Why, what’s your problem?” What’s more, neither has the Men’s Rights Movement that feminist bigots so bitterly oppose.

No it hasn’t fought literal wars – the war on masculinity and men, on gamers, on t-shirts, tampons, religion, and so on aren’t literally wars.  Though they have supported the male-only draft that forced millions of mens into being slaves of war and die torturous deaths.  They were part of the system that forced men to die in war and then the feminists continue to blame them for being men forced into fighting wars. It’s sickening.

Killed no opponents? Hateful feminist author and activist Margaret Jensvold shot and killed her son. A feminist recently aborted her baby simply for being male.  Feminists likely would have killed Erin Pizzey. Prominent feminist Valerie Solanas attempted to kill Andy Warhol and a Swedish group based on her ideas creates videos glorifying killing men.  So yeah, that claim is just objectively wrong.

“It battles for education.” Feminism battles _against_ male education.  With their zero sum philosophy, a decline in education for boys means a win for girls.  Feminism in education is failing our boys and feminists trot out  fewer men in college as a success –  fewer boys graduating high school is lauded as a victory.  The research is exhaustive on this.  Simply put, feminists hate boys in education.

“…for the vote.”  No feminist screed will be complete without this claim. It wasn’t feminism that got women the vote but “old white men” (eeeew!) This feminist claim isn’t complete without the mandatory age/race/gender shaming and vilifying men.  When we examine this issue, we see that when most women favored the vote, within months, they had the vote. The understanding at the time was that eligibility to vote was eligibility for the draft, and women understandably didn’t want to be included in the male-only genocide of war.   Yet, we gave women what until then didn’t exist; the right to vote.  Before this, voting was a privilege contingent on the possibility of becoming a slave of war.  Today, in many states, drivers licenses, voting, and across the nation, college loans are contingent upon registering for the draft.  It is a crime in itself not to register for the selective service, but only for men.  So women have the right to vote, men only have the privilege.  Do feminists want to help men get the right to vote?  Of course not!

This “…better working conditions” bit is laughable.  Anyone who follows GirlWritesWhat will remember the hateful feminist bigots protesting the lack of male deaths in the workplace.  In a year when male workplace deaths decreased and female deaths remained the same, feminists saw the male percentage drop and the female deaths as a percentage increase.  This increased safety for men was misogyny writ large – they took to the streets and demanded more workplace deaths.

This meme reveals feminism to be man-hating and reveling in male death and suffering.  “…rape crisis centers, women’s refuges, reforms in the law.” Rape crisis centers for women only, at the exclusion of men.  Even though males are far and away more likely to be raped, feminist are universally blind to the suffering of male rape victims.  From infant male sexual torture/genital mutilation, often to death, to prison rape, caregiver molestation, males make up the overwhelming majority of rape victims, and we see a universal opposition within feminism to the MRM’s challenge to the feminist idea that males are always rapists, never rape victims that need help and protection.

I acknowledge that men are human beings with rights, feeling and their own struggles, with issues that matter.