On the 14th of June this year, a 46 year old Sydney woman was was charged with burning her ex-boyfriend to death last October.

It is alleged that she disabled the water mains, to ensure that the fire could not be put out, and then set the granny flat at the back of the man’s parent’s house alight to ensure that he perished.

The man died 2 days later from his burns, in the arms of his mother and father.

Three weeks before the women was charged, another women had doused her male partner in gasoline and set him alight, all while their 11 year old son was in the next room listening to his father scream.

But is this typical female behavior; are women capable of being violent to men?

Well, we will probably never know, because even before the female perpetrator has a chance to accuse her victim of being abusive to her, society is already doing it on her behalf. 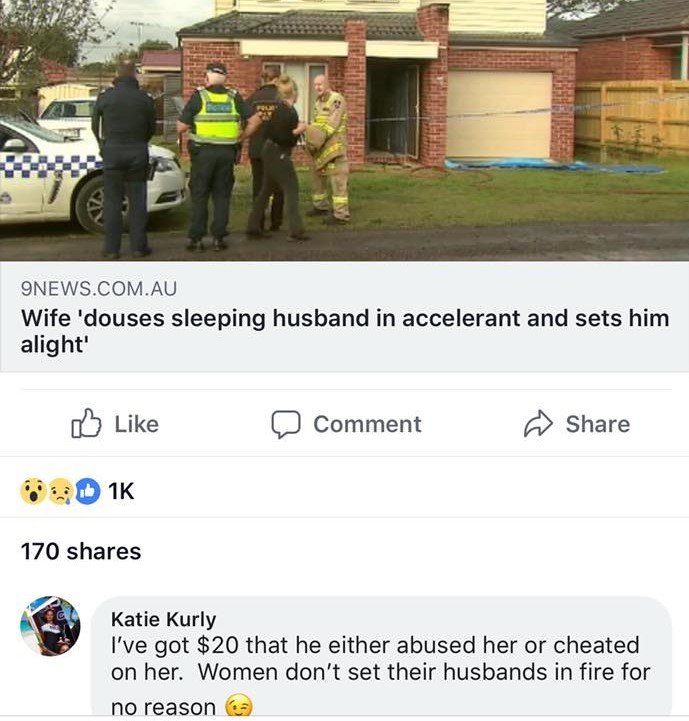 Even if there wasn’t abuse, it would appear that a simple unfounded accusation that the man sought the comfort of another woman, is enough to blame the victim for his own injuries.

In the eyes of Katie Kurly, if a man cheats on a woman, that’s enough to excuse setting him on fire and exposing his son to his screams of pain.

There is no accusation that the man did anything to deserve being set on fire, but if he had been having an affair, perhaps the woman would have been better off trying to run down her husband and his lover in her car, because the media seems to think that’s pretty amusing.

But, according to the Australian Bureau of Statistics (“ABS”), this violent behavior is not typical of women; it is typical of men, who commit these crimes 5 times more often than violent women. 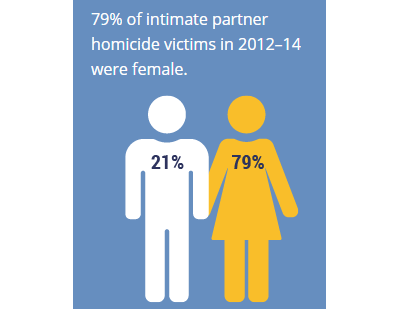 This has resulted in the accusations, that men are inherently violent, that masculinity itself is toxic, and that all female violence can be explained as self defense against a violent majority.

The evidence seems irrefutable; murder is murder, there is a dead woman, and the man killed her, but as we can see from the comments of Katie Kurly, even when a man is burned alive, he has to be to at fault because women don’t do anything to men unless they have good reason.

If the ABS are simply reporting domestic violence deaths from murder convictions, and we know that women are half as likely to be charged, and half as likely to be convicted, one could argue that these figures are not reflective of anything other than an anti male, pro female bias that exists, not only in the legal system, but in the wider community 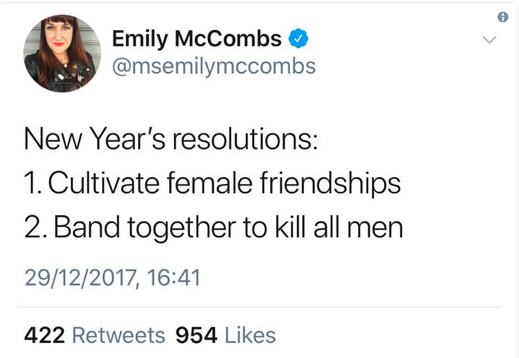 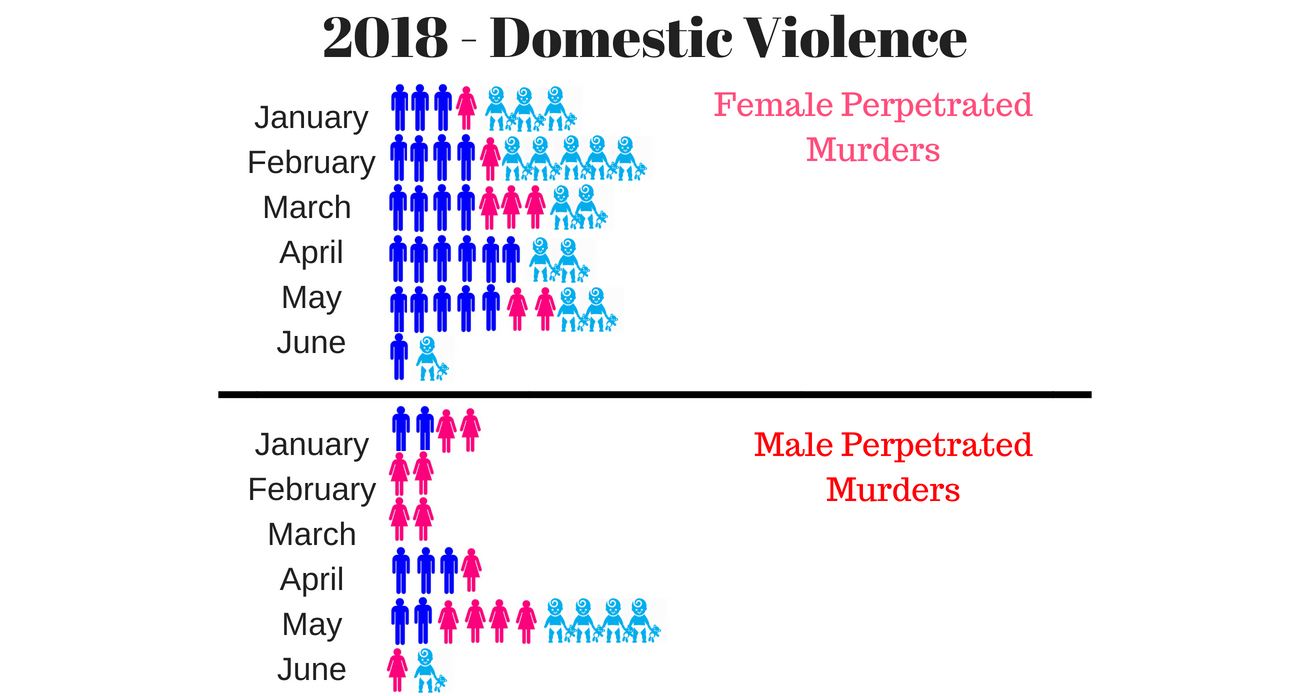 So what is going on here, well let me explain…

Unfortunately the ABS do not publish their raw statistics so that a simple comparison can be done to determine if the DVA statistics have captured all of the reported deaths.

Governments need to stop controlling access to the data they collect because every citizen, male and female, has a right to know the raw truth about violence and crime; especially when those statistics are being used to justify hatred against a group of people in that society.

For instance, it is unheard of for anybody to publicly suggest that a woman, who had been set on fire by a man, probably brought it upon herself because she was unfaithful; and even if someone did, society would be quick to point out that women should never be judged for infidelity.

In an equitable society, we must ask ourselves whether or not, men face extreme levels of prejudice, both as victims and accused perpetrators of violence, but instead, the Australian Greens, a party who have held the balance of power in Australia, are discussing their vision for a world where women are never imprisoned. 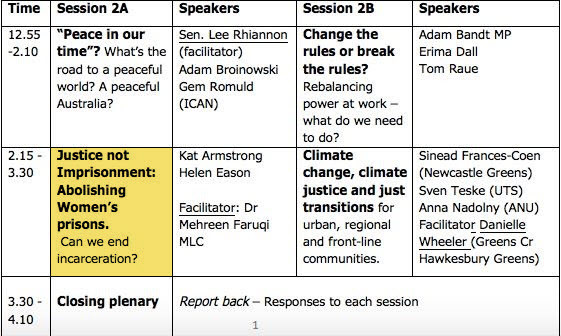 Only time will tell if the women who set men on fire will be charged, convicted and imprisoned, chances are they won’t be, but one thing is for certain, as a society we show no sympathy for male victims of crime.

If a woman kills a man, it’s just too simple for society to turn a blind eye, and assume the man deserved it, even if there is no evidence of this, because the reality is that nobody wants to send women to prison; so she will be offered an attractive plea deal, the charges will be dropped all together.

Instead, we now openly discuss masculinity as being toxic, and blame all violence, no matter who committed it, on men, based upon the belief that men have power, and exercise it though patriarchal violence.

After all, the statistics show that men are 10 times more likely to be victims of violent crime, and that in most of those cases, it is someone else’s son who commits that violence.

But has it ever occured to anybody that male violence, is a product of a society that has no real value of male life; while at the same time, highly valuing the life of every women?

In a world where male life has no value, and feminists argue that it is completely OK to hate men, would it not seem more probable that male violence is a manifestation of the lowstatus of men?

Boys in Australia are dragged into school halls and lectured by feminists not to ever hit a woman; all while their female peers look up at them as perpetrators of future violence. 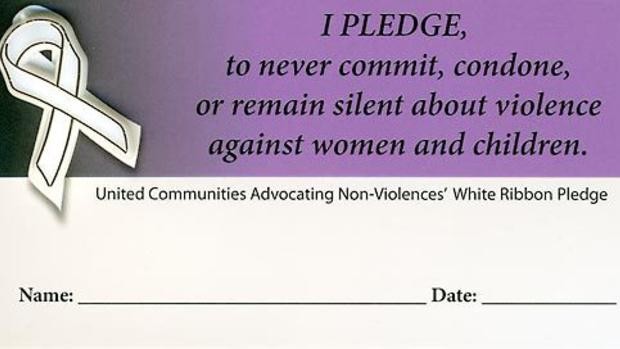 In such an environment, is it any wonder that the statistics collected by Domestic Violence Australia have no resemblance to the statistics published by the Australian Bureau of Statistics?

Perhaps one day we may discover a true irony of the advice pinned to government Facebook pages around the world; The same pages that claim domestic violence is a gendered crime committed by men, against women.

Even if only one in one million perpetrators of domestic violence were women, one would think that feminists would insist that girls also be forced to pledge to never to hit a man, women or child; but feminism is not about gender equality, it is about shaming, reputation destruction, power and control.

Feminists will always defend a woman accused of violence, while condemning every man, all before the legal process has even started; the very definition of prejudice.

Women and the 34 hour work week

A Response to a Review of the Book “Men Without Work”