The title of this article was shamelessly borrowed from the Men Going Their Own Way forums at MGTOW.com. The term Zeta Male continues to pop up on forums and websites as a synonym for MGTOW, though not many people are aware of where it originated.

Zeta Male refers to men who have opted out of traditional societal expectations that a man serve as helper, builder, protector, provider, defender, and husband to women, while accepting that these roles also require him to be disposed of if required – in mind, body and not infrequently in death. Before we get to the earlier background of the phrase here are a few examples of Zeta Male spoken of in MGTOW discussion forums. First up is one from a 2012 Yahoo forum by ‘John’:

John: “I’ve recently been carrying out some investigation into the Zeta male movement, also known as MGTOW (Men Going Their Own Way). This is a philosophy based on the principle of men rejecting the traditional Alpha and Beta role models because they are based upon how women view them. The Zeta male lives life outside of the traditional Alpha and Beta models and undergoes no judgment from females, equally not requiring any judgment from females. This interests me because I see so many guys these days seeking validation from women just to feel they are living their lives correctly. In men I believe this requirement for validation and frequent rejection is a contributionary factor leading to forged lifestyles, a loss of confidence and in severe cases mental illness. This topic interests me hugely and so I am keen to get the views of others. What do you think about the Zeta male and MGTOW?”

OldAtHeart: “I have long identified myself as an Alpha male to make the strong distinguishment between me, and them well known, but recently I have discovered that Zeta male fits me much better. I have decide to dump the term Alpha male considering how many Mangina’s use it to place themselves on a pedestal, based off how much pussy they get, and how much simping they do to get it.

“Why didn’t that guy show respect to that woman when he saw she could be placed first? He’s a Zeta Male and lives on his own terms. Besides, what reciprocal obligation does that woman have to men but “choices”.

BeijaFlor: The “Zeta Male” label was proposed around 2010, for the men who aren’t playing the dominance-and-subservience games of alpha/beta – more on point, proposed as a label for the men who actively reject the gynocentric model of alpha-fux-beta-bux and the social-dominance model of “alpha” behavior…

Feminists have used Medusa as a symbol of female rage and power. The Zeta Male is one who has contempt for female rage, and spurns female/feminist power; he views Society and its antics through the mirror of his Red Pill understanding, and doesn’t get sucked into the games, the posturing, the alpha-beta roles, the desperate quest to measure himself by the opinions of the crowd or the standards of the girls he might or might not be able to bed. He rises above all that shit, and goes his own way, unseen by the crowd.

We can reduce the above descriptions to the following. The Zeta Male:

a. Refuses to identify with alpha/beta male stereotypes
b. Rejects gynocentric expectations
b. Says no to unreasonably constrictive aspects of traditionalism
c. Champions male self-determination
d. Refuses to be shamed, seduced or intimidated into submission

Sound familiar? It should, because these are exactly what most self-identified MGTOW champion on their blogs and forums, and quietly live in their day-to-day lives. Point d., while not elaborated above, was spelled out in the earlier writings on the subject. In fact it was spelled out in the inaugural A Voice for Men article by Paul Elam entitled The Plague of Modern Masculinity. In that article Elam coined Zeta Male and included all of the five points of listed above. Here’s the main excerpt from the original article:

“As previously noted, the men’s movement is a unique and literally unprecedented phenomena. It will bring with it some other firsts. One of them is the socio-sexual warrior, and I refer to him for the purpose of this discourse as the zeta male. The tag remains faithful to the Greek alphabet classification of the other three types of men, but there is more purpose to the label. I took it from the star Zeta Persei. I liked the navigational metaphor of the star as it is applicable in the context of the lost generation. But I was also intrigued to learn that Persei is a variation of Perseus, the first of the Greek mythological heroes. Perseus had a remarkable talent for slaying archaic monsters, Medusa the Gorgon among them, who as a mortal woman possessed great beauty, and was self enamored and struck with the power of her sexual allure until she was turned into a hideous monster by Athena, who later used her severed head as a weapon on her shield.

In 1940, an article by Sigmund Freud was posthumously published, entitled Medusa’s Head (Das Medusenhaupt) in which he postulated that Medusa represented castration in a child’s mind related to discovered and denied maternal sexuality.

Even more interesting is that in modern times, feminists (Women: A Journal of Liberation, 1978) adopted and reinterpreted the image of Medusa as representative of women’s rage, and it served as a binding symbol of feminist solidarity.

So Perseus, namesake of Zeta Persei, was the slayer of Oedipal shame (control) and the murderously powerful raging feminist archetype.

This classification of a male is new because this is a male that until recent times was never needed, and indeed was never there. He is emergent and unpolished and struggling to find his legs, but is doing so thanks to the fertile, safe ground, provided by, of all things, other emerging zetas on the internet. He has no allegiance to tradition or nostalgia for the past, and in fact is charged with plotting a new course. He cannot be shamed into control or intimidated into silence or seduced into capitulation. He doesn’t fit in the classic hierarchy, and would gladly bring it down in the name of his cause. When someone says he needs to act like a real man, he smiles and says, “No, thank you.”

He doesn’t seek power, but justice. And he has one overarching feature largely absent in the world around him.

He cares about those lost young men who were ambushed coming out of the womb. And he will strive to make himself an example, living proof that there are other roads to take than the ones that lead to self-hatred and self-destruction.”

This description inspired other writers to weigh in and elaborate the idea in greater depth, although most of the key points were already laid down in this first article. What we have 5 years down the track is wealth of elaboration about the Zeta on both AVfM and on the wider web. Of interest, most of the early (2010-11) elaborations of the Zeta Male pre-dated the almost identical discussions that were to emerge in the subsequent four years (2012-15) on YouTube channels or blogs under the revitalized heading of MGTOW.

Starting in 2010, the concepts Zeta Male and MGTOW provoked discussions about gynocentrism and male self-determination that moved far beyond the simplistic constructs of a small earlier group (2004-06) who came up with the MGTOW symbol and proposed some traditionalist goals such as instilling masculinity in men, and nurtural femininity in women (along with more acceptable ideas like rejecting chivalry). The earlier group does not register on the Google Trends timeline below. 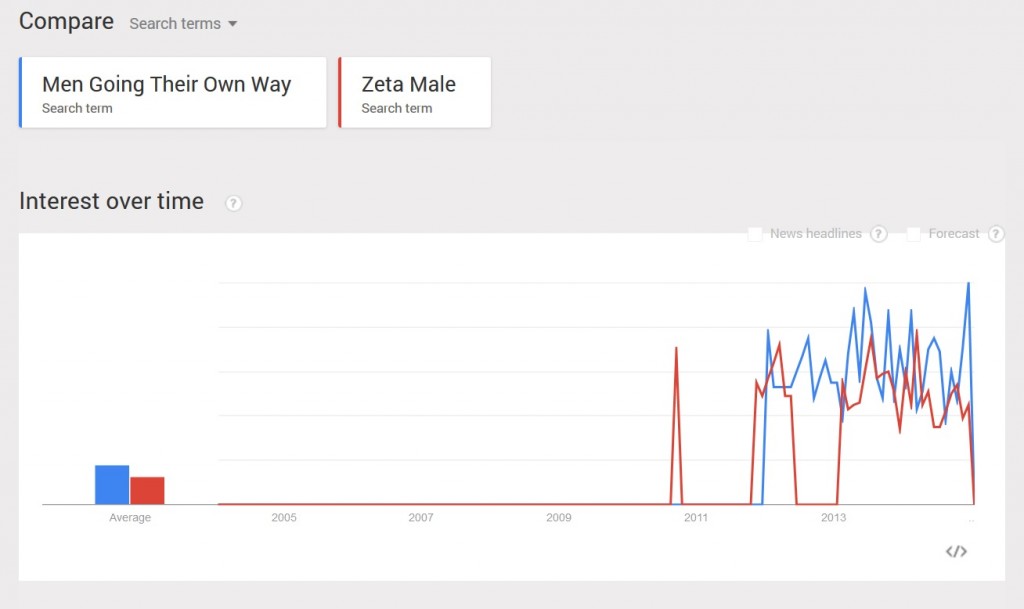 I used the full search phrases for Google Trends above because the MGTOW acronym serves for the unrelated phrase Maximum Gross Take-off Weight from field of aeronautics, a concept accounting for approximately half of all mentions of ‘MGTOW’ on the internet, and one creating potential error about the prevalence of MGTOW as acronym for Men Going their Own Way. Likewise for the sake of greater accuracy I chose Zeta Male for the comparison rather than simply ‘Zeta,’ which would have over-inflated the results.

As a long-term practitioner and advocate of MGTOW, I occasionally use Zeta as shorthand for the longer phrase ‘Men Going their Own Way’. In some ways I prefer it because it’s short, and rolls off the tongue in a manly way. I’m also a proud MHRA – and Zeta Male sits perfectly within that category.

Like many in the manosphere I’m one of those dual beasts like the mythical centaur – in my case part MGTOW and part MHRA. But for some purists that wont do, for you must be assigned to either one or the other classification, one pigeon hole, so the observer can avoid a frightening cerebral meltdown in the face of human complexity.

For those who deny that the MHRM has always upheld self-determination for men as part of its suite of concerns — that MGTOW is, in fact, a men’s human right — and that men can be both MRA and MGTOW simultaneously — for those who prefer to conceptually cleave MGTOW and MHRA apart (even when existing in the same person) and reframe them as radically opposed rather than complimentary orientations, please feel free to re-brand me a Zeta... I’d prefer that to being reassigned into one of your cute cuts and cubbyholes and losing half of who I am. As Walt Whitman puts it,

Going back to the heading of this meandering article, I want to re emphasize that one of the first lessons of the Zeta Man is that a man can shake himself free of claustrophobic stereotypes of masculinity. For anyone new to the concepts above who would like to learn more, the following video by David Abram gives an entry-point into the way of the Zeta Male, and the call to say Bye bye to the Alpha-Beta fucktardary.

MGTOW is an impersonal force which Goes Its Own Way