It is with great happiness and no small level of relief that A Voice for Men announces the first set of medical protocols for dealing with the infectious disease known in the popular vernacular as “Feminism.” This puzzling disorder afflicts about 20 percent of the United States’s population, resulting in paradoxical symptoms of increased aggression, paranoia, and projection in women, and an unnatural passivity and sexual cessation in men.

In addition to mental disorders, Feminism’s major physical impact is to cause abortions, both spontaneous and medically induced, that cost the afflicted the lives of millions of their healthy children as well as wasting countless public medical resources better spent on treating other life-threatening disorders, such as infectious diseases and bodily injuries.

Oftentimes the causes of even widespread diseases can remain obscure and the medical establishment can be slow to recognize cutting-edge theories and treatments, so even as we appeal to medical authorities to take these findings seriously, we recognize that the process of altering the popular understanding of pathological Feminism will be contentious and time-consuming.

For example, once upon a time, the cause of the ubiquitous stomach ulcer was obscure, and often attributed by medical science to vague factors like “stress” or “spicy foods.” Bland diets and the career-killing “stress management” of ulcers had poor track records that frustrated patients and doctors alike, although the ongoing treatment of ulcers using ineffective measures did provide something of a financial boon to both legitimate medical practitioners and pseudo-scientific “alternative” therapists.

In 1982, however, it was discovered that stomach ulcers were caused by a bacterium now known as Helicobacter Pylori. This finding was controversial for years but eventually led to effective treatments.

Likewise, a disease known first in the early 1980’s as “GRID”, or “Gay-Related Immune Disorder,” was often attributed to libertine homosexual lifestyles of that era, but as our understanding of the disease eventually transcended both liberal and conservative ideologies it became known as “AIDS,” determined to be caused by infection with the virus dubbed HIV.

Like stomach ulcers and AIDS, the causal factor of Feminism was once obscured by poor research, financial motivations, and ideological concerns such as the alleged “patriarchy”. Once Feminism achieved its stated goal of legal equality for women with men (and feminists’ sotto voce goal of female societal domination) it became clear that something other than ideology was driving the increasingly febrile daily behaviors of feminists.

Indeed, it wasn’t until January of 2015 that the infectious agent for Feminism was first identified: a bacterium known as Toxoplasma gondii, or T. Gondii.

Toxoplasma gondii: The cause of Feminism

Let’s review the facts known about T. Gondii and how it relates to Feminism.

T. Gondii lives in rodents such as mice, members of the feline family known as domestic cats, and humans as well as other warm-blooded animals, many of whom are common human food sources. Cats are crucial to T. Gondii insofar as it can only reproduce in their digestive tracts and cats propagate the disease through their feces.

T. Gondii has evolved to make rodent hosts alter their behavior to become suicidal: once infected they become sexually attracted to cat urine and instead of avoiding predation, the mice seek out cats to eat them.

The feminist inclinations inculcated in T. Gondii infected human individuals have additional effects: they disrupt human pair-bonding and sexual reproduction, inevitably leading to a solitary death of the host feminist that can go unnoticed for weeks or even months by the larger, uninfected society. Once one of these infected feminists dies alone and is subsequently consumed by rats or cats, the life cycle of T. Gondii proceeds even faster, but this is not essential to the survival of the infection, merely an enhancement.

The meme of feminists dying alone (often with their cats) has been noted here, and here.

Although high doses of psychoactive drugs seem to interfere with the effects and reproduction of T. Gondii, a pharmacological cure for Feminism remains elusive. It is hoped that the huge number of Feminism sufferers will provide lucrative incentives for the market to research potential treatments for this scourge.

Once infected, the damage to the brains of feminists appears to be permanent in most cases, although in an increasing number of sufferers spontaneous remission away from feminism has been observed. “Trigger warnings” and other irrational mental gymnastics seem to perpetuate Feminism and are best ignored by those seeking to grow beyond the hurdles created by the infection. Only the most tangentially infected and mentally stable of feminists seem to be able to manage this feat.

Until an effective treatment or cure is found, it is recommended that domestic cats, when employed as pets and companion animals, be kept exclusively indoors where they can be dissuaded from eating infectious mice or birds. Indoor/outside cats should be avoided. Working outdoor cats on farms, granaries and other areas should be isolated from human touch until they have passed an isolation protocol.

Likewise, all contact, and especially sexual encounters with feminists, particularly cat-owning feminists, should be avoided since the possibility of infection or unjustified rape allegations soars in this population. Ironically, avoiding “cat-calling” and other “rapey” behaviors ostensibly censured by feminists for substandard and/or minority men should also be adopted by even the most attractive and wealthy men, who are urged to seek more healthy, non-feminist partners for their sexual outlets.

Until a cure is found, socially isolating feminists and their cats’ feces is the most prudent and effective way of containing the damage caused by this horrible disease. 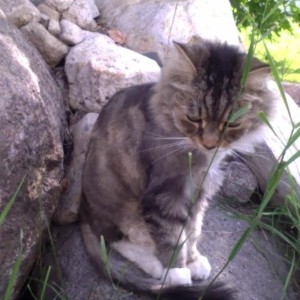 PrevPreviousABC News, do you even ethics? #GamerGate vs Nightline Edition
NextRita Panahi: Women are more equal than othersNext
Menu