The following excerpts are from Engendering the end of European history: Auguste Comte’s Cult of Woman at the Heart of The Western Republic by Professor Mike Gane. Auguste Comte (1798 – 1857) was the founder of the doctrine of positivism, founder of sociology (actually coining the term), and a champion of the idea that women should be placed at the reverential centre of human affairs. Read below to learn more about the Father of Sociology. — PW

“After completing the founding study of the law of the three states in 1842, his life and thought were deeply shaken by two events. The first was personal. He separated from his wife, Caroline Massin, in 1842, the very day he completed his first major work. In 1844 he began an intense emotional affair with Clotilde de Vaux, at her insistence platonic, which lasted until her death in 1846 at the age of thirty-two.1 The second event was the marked change in the social composition of French society and the experience of the revolution of 1848-1851, particularly the emergence of the proletariat as a political factor.

In the 1840s Comte’s method and conceptions went through considerable transformations. He rationalised his emotional life as a salutory purification and spiritualisation, and after her death Clotilde was transfigured into a saintly figure whose image Comte began to worship.2 Reassessing his own project he argued that all attempts to solve the western crisis through reason and science alone only exacerbated it. All reason, for him essentially masculine, could be effective in the human context only if guided by the moral and emotional superiority of love and affection, essentially feminine. Comte took his own experience of the sublimation of physical love as a necessary process for all those trying to resolve the social and cultural transition of the three states. He installed the ‘Maxims of Clotilde’ within the new religion of humanity in imitation of the medieval cult of the virgin mother.3

When he came to work out the logic of the revised strategy, he based the new construction on a subjective method: the law of the three states was to be completed by adding a theory of the emotions to the theory of science and industry. The final third-state became, in Comte’s last version, a combination of science and fetishistic worship… This fundamental order was to be ruled by a purifying cult of woman, regarded as the centre of love and affection. In order to reach this final state there would be a transition period in which the dictatorship of the proletariat would purify economic life and the commercial spirit.4 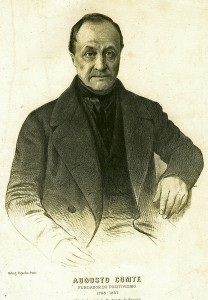 “Comte’s thoughts on the new society were far from communistic. Against the revolutionary and communist visions of the dictatorship of the proletariat, Comte argued that the positive doctrine would legitimate a new hierarchical social order: in the economy it would legitimate differences of wealth, and in the family it would legitimate the separation of the sexes and the spiritual ascendency of women based on the realisation of the principle of virgin motherhood. Comte aimed to appeal to all sections of political opinion, radical and conservative, since he wanted to reveal precisely how each element fitted into a broad scheme of social progression.5

“Comte is just as radical in his proposal for a reorganisation of gender relations. Here his aim is to reverse the tendency to the debasement of love in Western culture, and to deal with the new phenomenon of feminism and the demand for equality between the sexes. Comte poses this issue again historically as a problem of the debasement of the ideals of chivalry and courtly love of the medieval period. His aim is to restore some substance to the idealization and purification which the medieval practice seem to inspire.6

He commends the principle of eternal widowhood (with certain limited exceptions which would have applied to Clotilde), and reasserts the value of the segregation of the sexes. The woman should obey the husband, but the latter should adopt the cult of women and guardian angels. Comte’s radical hypothesis, however, is that all sexual relations in society should be replaced by a utopia of the virgin mother. This utopia itself will reverse the decline in the status of women. The utopia would give women complete control over human reproduction. It is not absolutely clear just what Comte had in mind. There could be an organic development which itself would lead to a new hermaphroditic condition, or artificial insemination would become the norm.

The specific details of the cult of woman were developed and practised by Comte: the nature of the image, the prayers, the language, the gestures.7 the objective is purification and hygiene. What women will do is left an open question to be developed and solved by women themselves.8 His view is, however, that the physical act of sex so far as men are concerned is not principally to be understood in terms of reproduction but rather in terms of its sublimating function. Against the demands of feminism, for instance as exemplified by the demands of his wife Caroline Massin, he claimed that they could never form the basis of a set of stable human relationships, but produce only continuous metaphysical strife.

It is through the segregated and hierarchical structures, through idealisation and duty, that a new stability can be attained. In effect therefore, the Comtean programme for the family is intended to end the metaphysical phase within the domestic sphere. Once the final stage is achieved science itself comes to an end in a system of harmonised laws which are all conscious of their place in the totality. It seems at this point that life will be made up of rituals, ceremonials, re-enactments and reproductions of the various aspects of the three-state law. In this sense the law seems to reflect Comte’s own deep longing that the pain of the modern crisis be ended, as it predicts the certainty of a positive state in which everything will find its rightful place. Comte noted in 1852 that it is feeling which is;

the sole existing preservative of Western society from a complete and irreparable dissolution. Since the close of the Middle Ages, the influence of women has been the sole though unacknowledged check on the moral evils attaching to the mental alienation toward which the West more and more tended, especially its centre – France.

He insisted that it is only when men begin to think under ‘the inspiration of women’ can they ‘bring synthesis into constant harmony with sympathy.’9

“The final system of Comte’s sociology, with the modifications introduced from his reconstructed masculinity, suggests that the medieval system already attempted to install a cult of woman in the worship of the virgin. In 1853, Comte returned to the great western transition and again treated it in terms of the contrapuntal movements of its main phases.10 But Comte’s reorganisation of his explanatory forms did not change: he simply added a note at the beginning of the story indicating the fundamental but passive influence of women. –women preserved society from complete dissolution.11 At the other end of the account of the transition he added a note on the effect of the decisive influence of Clotilde to the reconstruction of the positive philosophy.12

Nevertheless the social topography of Comte’s later vision was strikingly different from the earlier one: the western revolution is an interregnum between two social systems in which the feminine principle, the heart, rules the masculine principle, the intellect. More and more the systems at both ends of the historical sequence became structurally identical. the scientific elite would become the priesthood of the new religion of humanity, but a religion without theology. Paris would replace Rome as the sacred heart of Europe, and Clotilde would replace Mary at the heart of a new cult.

[1] I have discussed Comte’s personal relations and how they related to his intellectual development in M. Gane, Harmless Lovers? Gender, Theory and Personal Relationships (London, 1993), ch 6; and in ‘Unresolved Comte’ in Economy and Society, 24 (1995), 138-49.
[2] In the crisis of the insurrection in Paris in June 1848, Comte wrote a ‘Saint Clotilde,’ an address of commemoration on the anniversary of Clotilde’s death. In the address he referred to the ‘ill-omened detonations… of bloody conflict’ going on around him. He said, ‘I am indebted to thee for finding some pure satisfaction in a dreadful crisis… Though mingled with warlike sounds, I already hear indications that the human metropolis is returning to its normal condition. The carnage on both sides may have ceased, at least until the next conflict, which will be still more terrible, unless the working men now in arms shall have discovered their real camp.’ A. Comte, Confessions and Testament: And his Correspondence with Clotilde de Vaux, edited by A. Crompton (Liverpool, 1910). pp.349-57.
[3] For a typical statement of these relations see the Preface in A. Comte, System (New York, nd) vol 1, pp.ix-xxix.
[4] See Comte, System (New York, nd).
[5] These propositions were worked out in continuous outpourings in the years of positivism after 1847.
[6] All the main details of his ideas are expounded in A. Comte, System, (New York, nd), all four volumes.
[7] Comte might well have been influenced by the revival of Catholicism which emphasised Christian love. See a discussion of this in E. Berenson, ‘A new Religion of the Left: Christianity and Social Radicalism in France, 1815-48’ in The French Revolution and the Creation of Modern Political Culture, edited by E. Furet and M. Ozouf (Oxford, 1989), vol 3, ch 29. For details of Comte’s religious practice see for example the collection of texts in The Religion of Humanity, edited by A. Crompton (Liverpool, 1907).
[8] In effect Comte leaves women little room for choice since his sociology has already allocated women their role, function, and place in the final state.
[9] In Comte, Preface to The Catechism of Positivism, (London 1891).
[10] See A. Comte System, vol 3, pp.452-531.
[11] See Ibib. p.436.
[12] See Ibid. p.530.

An open letter To Rosie Batty