The following Blog entry was posted on AVFM forums by one of its members, Maxx. It is edited and republished here with his permission. ED

People within the MRM and beyond like to toss around the terms Alpha and Beta. I think the ways in which these terms get typically thrown around are misguided and potentially harmful and deterministic. Anything ‘manly’ from fighting to sex with women to making money to building muscle to learning to be a good husband and father, whatever ‘alpha’ means to you it can be achieved through hard-work. Don’t let anyone tell you different. Nothing is a birthright, for anyone. It’s ALL LEARNED and LEARNABLE.

The great myth of the universe is the idea that it isn’t; that you are assigned the role of a ‘winner’ (alpha) or the role of a ‘loser’ (beta) at birth.

The majority of professional combat sports champions the world over were victims of bullying at some point during their formative years. Many of them (like Mike Tyson) are patrons of anti-bullying charities and organizations exactly because of that. Let that idea swirl around in your head for a moment. How does that reality sit alongside the idea that our place in the pecking order and our status as a man is ‘fixed’ rather than mobile and something we can proactively assert agency of and decisive influence over? The only ONLY thing any man is stuck with is his height. Everything else can be changed through an assertive, proactive application. Also known as “taking the bull by the horns:”

A poor guy can work smart and get richer.
A weak guy can lift weights and eat right and get stronger.
A push over can train martial arts and learn to fight.
A fat guy can run to lose weight.
A slob can dress right.
A bad husband can be better tomorrow than he was today.
A guy who’s a sap around women can apply himself and up his game.

The great lie is that you can’t because you haven’t been dealt the right hand. It’s an excuse weak men cling to justify giving up before they even have to start. The terms as they are typically used these days imply a sense of determinism about a given man’s ‘lot’ in life that’s well wide of the mark. When people talk about ‘beta’ they are really referring to a negative way of behaving and thinking, a set of behaviors and responses that are not only LEARNT, but that can (and should) be UN-LEARNT too.

When people evoke ‘beta’, they are typically talking about a set of ideas and behaviors that males within feminist cultures and societies are conditioned into believing and adopting. Not a state into which individual men are merely ‘born’. 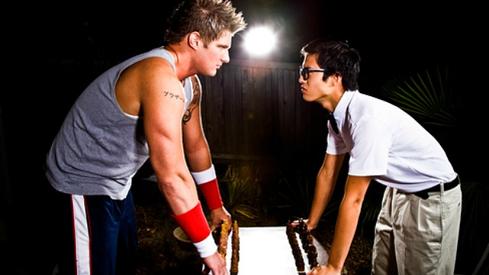 The only difference between the ‘alpha’ and the ‘beta’ going strictly by the most common definitions of the terms (as different modes of thinking and acting about women) is the ability to adapt. The alpha, according to THIS definition, is merely the guy who adapts in the face of failure and adversity, and the beta is the one the keeps doing the same things over and over expecting the universe to gift him a different outcome ‘this time.’ If every time a man makes a mistake he makes an effort to learn from that mistake and to avoid repeating; eventually he’ll become ‘alpha’ in relation to whatever field he’s applied himself to in this manner. It’s as simple as that. But in evolutionary terms, the terms alpha and beta refer to something very different than their current usages (based on popularized PUA and Red Pill definitions of these terms).

Strictly speaking (dialing the terms back to their evolutionary psychology roots) EVERY alpha starts as a beta. That’s literally speaking what a ‘real’ beta IS. An aspiring alpha. Because ‘alpha’ is learnt. Alpha ain’t born. At some point, the pain of staying where you are has to outweigh the fear of taking a proactive step forward into the unknown. A lot of men never reach that tipping point. Happy to coast along in relative comfort and relative misery. The guys that end up looking ‘alpha’ to others are merely the guys that couldn’t stand the situation they were in so badly that they got it together and figured out a way to get out of it and advance proactively in a way that elevated their status relative to those around them.

When it comes to mating and dating most guys we refer to as ‘beta’ in Red Pill and PUA circles aren’t really beta…in the real (evolutionary) sense of the word. Most average joes (typically referred to as ‘beta’) are more like Gamma and Delta males. They never attempt to assert any proactive agency over their romantic or sexual lives. They let the chips fall where they may; they aren’t tactical in their approaches and interactions with women. They don’t adapt in the face of adversity. They aren’t systematic. They’re just coast along. They want a wife and two kids, and they are happy to pull her apple cart to get it. But they don’t realize that without game and proactive relationship management today’s divorce laws and family court system will leave them pulling the apple cart forever without the wife and kids to show for it.

Another set of guys who are often mislabeled as ‘beta’ is basement dwelling nerdy types who are male virgins and have opted out of the dating and mating game entirely and are wasting their time waiting for someone to invent a convincing sex doll that they can buy to dump their loads. These guys aren’t really ‘beta’ at all. They are more like Omega males. Some of them like to call themselves MGTOW and claim they are on some kinda ‘dick strike’ in the hope that those mean old nasty-ass women will ‘change their ways’. Most of these poor guys don’t realize that for as long as they pay the government via the tax system they ain’t gonna ‘change’ jack shit besides their own stained bed sheets.

A TRUE beta is a guy who’s merely trying to be better today than he was yesterday. At whatever he’s applied himself to. A guy putting one foot in front of the other and trying to advance. A guy willing and able to do this in relation specifically to the dating and mating game quickly starts to look ‘alpha’ from the point of view of average joes. They don’t even process that there is even a game being played at all so when they watch him playing it well, it’s just witchcraft to their untrained eye. He just looks to them like a wizard instead of what he really actually is which is simply a player.

To the clueless average Joe, he’s one of those guys that ‘gets all the luck’, or so they tell themselves as an excuse for not even attempting to proactively LEARN to play the game as effectively as he has in the first place.

It’s easier to pretend there’s no game at all.

And then there is the Sigma. This is a lone wolf. Not a pussy like an Omega. And not part of the overall wider social structures like the Gammas the Deltas and the Betas. Sigma is more like what a true MGTOW might be like. Living on his own terms. By his own means. EVERYTHING can be learned. Including active progression within these social structures and hierarchies. Including successful rewarding self-sufficient living outside them.

Another thing about this alpha/beta stuff that creates a lot of confusion is that these terms (in their most common definitions) are too restrictive. They suggest if a guy is alpha is one aspect of his life he must be alpha in all of them. Like a man just ‘is’ or ‘is not’ ‘alpha’… This is seldom how it works in reality. The guys that tend to get divorce raped the hardest tend to be ‘alpha’ when it comes to business and taking on and competing with other men over capital but very much ‘beta’ and clueless when it comes to women. That combination is what every golddigger’s wet dreams are made of.

Meanwhile, on the flip side there are plenty of petty criminals and bums and junkies who are fairly useless at even managing to club together a basic living and stay clean and sober long enough to hold down a job, but they are ‘alpha’ enough to be able to seduce countless women, into not just bedding them, but also often funding their drug habits or binges or otherwise generally enabling their dysfunctional lifestyles as well.

So is the travelling homeless junkie musician ‘beta’ because he can’t even afford a sandwich or water to wash dirt from under his fingernails with? Or ‘alpha’ because he sleeps in a different beautiful young woman’s bed every night? Young women, he’s more than willing and able to manipulate into paying for his heroin? Is the 27-year-old self-made multi-millionaire investment banker ‘alpha’ because he’s made more money than anyone else his age ever has in his massive multi-billion dollar companies history? OR is he ‘beta’ because he can’t get a girl to even tell him her name without paying her to?

It’s all really a lot more complex than this simplistic alpha/beta distinction suggests. But the crux of it is that everything worth knowing, being and doing can be LEARNED. And any man telling you any different is a loser trying to drag you down to their level because it’s easier than figuring out how to stand tall for himself.

I love my female privilege

The Tale of Thomas and Mary Reibey

The Silencing of male victims – Interview with Deborah Powney