AVFMS Report: The First International Conference on Men’s Issues, sponsored by A Voice for Men

in A Voice For Men

Sponsored by A Voice for Men, the First International Conference on Men’s Issues was held just outside Detroit, Michigan, this last weekend, June 26-28. Quite fittingly, it was held at the Veterans of Foreign Wars hall #1146 in St. Clair Shores.

As someone who has volunteered at and attended numerous conferences and symposia and been a part of this movement for several years now, I was interested in seeing how it would go. To understand what this conference fully means is only possible if you have been living in this movement for years. As I told Bob O’Hara (AVfM News Director), it is nothing short of the culmination of five years of hard, grinding work, with the implications of finally mounting a movement centered on men’s equality issues.

Some who have long mocked men’s advocates (often for no other reason than sheer irrational hatred) took a quick look at the ~25 reporters attending the press conference and prematurely assumed that this was the men’s issues conference proper (which occurred one day later) and gleefully trumpeted commentary about the “low attendance.” The increasingly unhinged rag Raw Story got it wrong, and so did the Futrellian acolyte Diana Boston, blogger at “Mancheeze”:

Again, those in the audience in the video above are not attendees but reporters, and some of them represent hundreds of thousands of viewers at least. Also, take a look at your average White House press conference and you’ll see a similar number of reporters.

Not that the facts really deter them. Our opponents will continue to mock, deride, and degrade us regardless of what we do. After the death threats and the subsequent protest failed to shut down the conference, that’s all they can really do. They are a truly wretched bunch, since it’s really their own impotent bitterness, angst, and hatred they are projecting on others.

By the way, this is what the conference really looked like: 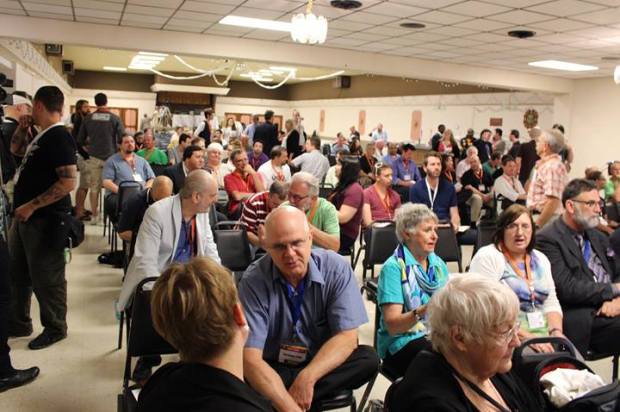 This is what it looked like while standing near the front and looking back over the main room during a break period when not everyone had found their seats. This picture does not include the people who filled the first several rows of chairs, the people on the stage setting up, the people congregating in the hallway, the people upstairs in either of the two parlors or out on the balcony. Or the people hanging outside among their smoking buddies. Or the people out near the gazebo in the back by the lakeside.

Yes, many attended the conference – including the sensational Honey Badgers, some of whom are pictured here: 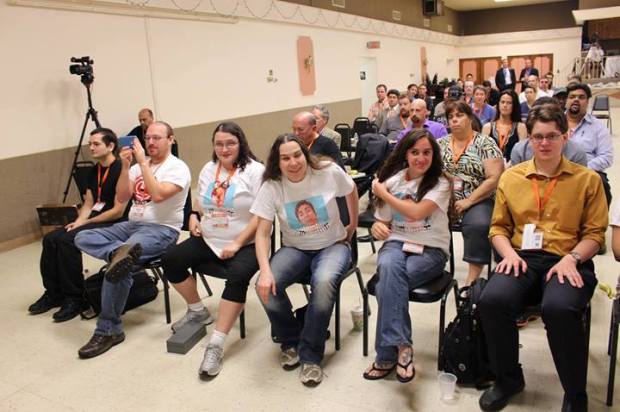 Strange, these folks don’t look like 50-year-old men wearing fedoras to me! Note, by the way, that the seats are filled all the way to the far back of the room.

So I’m terribly sorry to disappoint the naysayers and slimers, but no—the event was very well attended indeed. Despite the death threats. Despite having to move the conference. Despite the technical difficulties that occasionally arose. Despite all of the lies and hatred poured upon organizers and attendees.

Don’t worry, protesters—there’s always next year! For this year, however, the last laugh belongs to us.

I estimate that the conference had roughly 225 to 275 people—perhaps more—who filtered in and out over the course of three days. This is actually rather good for a conference-style event. The Project MALES symposia I attended at UT Austin from 2011-2013, which were better funded, more extensively staffed, and sponsored by the prominent UT Austin’s Division of Diversity and Community Engagement, did not have as many in attendance.

A full video of the first day is currently unavailable. Here is a preserved livestream of Day Two: 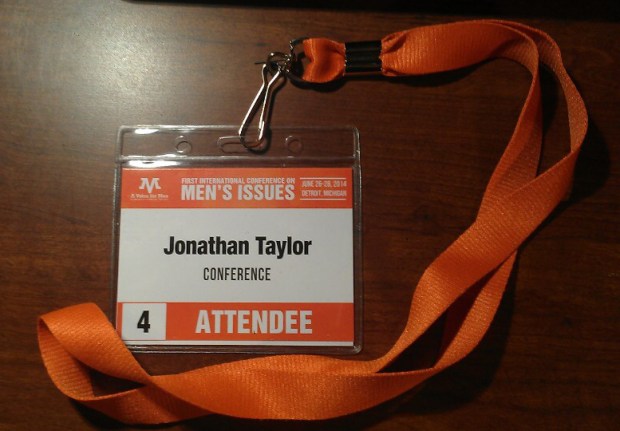 And here is the program of speakers handed out upon registration (click to enlarge if you need to): 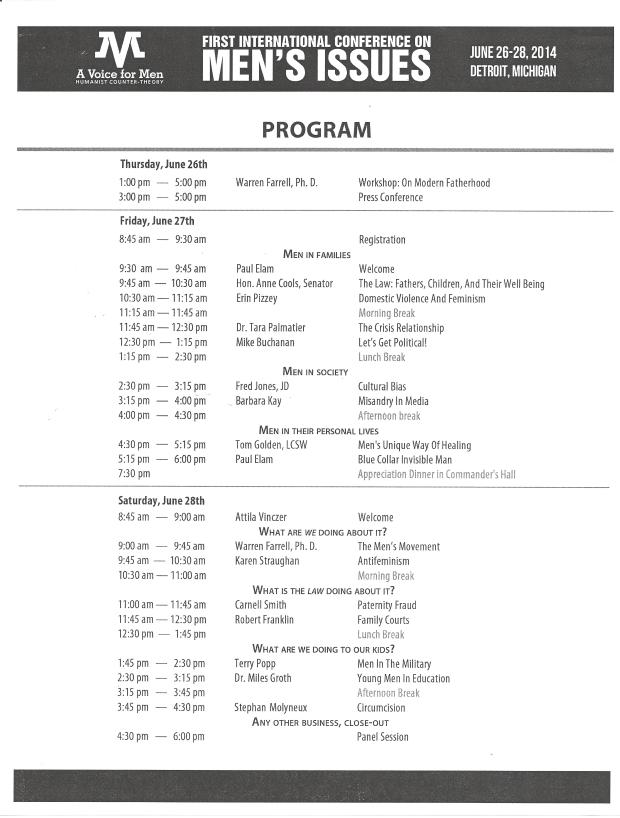 You may recognize the names of these speakers. If not, here is a description of them.

Although I had an average of four hours of sleep each night (the conference lasted all day!), the atmosphere at the event was highly energizing and sustaining. AVfM News Director Bob O’Hara told me he experienced a similar effect.

Before I flew in to Detroit, I was concerned about the majority of the heavy-hitters in the men’s movement all being gathered in the same place, especially since the death threats. When I got to the conference, however, my concerns quickly faded. There were police cruisers in the parking lot. During the conference security personnel flanked the walls and performed regular patrols to all open areas inside the building, as well as outside. All was calm, however. 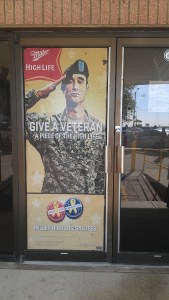 At first, none of the attendees could get in because the conference staff was still setting up. Once I was recognized by the AVfM staff, however, I was escorted past the security personnel who barred the doors.

There were a few subversive attendees. They were annoying but not extreme. I sat between two young men who were tweeting constantly. I couldn’t help but glance to see what they were saying. When speaker Erin Pizzey (founder of the domestic violence shelter movement and a supporter of abused men) told the audience that she was a violent child, I saw the man to my right tweet, “Erin Pizzey says she has always been a violent woman.”

I sat there and watched him as he tweeted it out. Unfortunately, this is the average degree of moral character of our opponents. I was tempted to track down his tweet and get into a Twitter war with him, but I knew that would only distract me from the reason I had come there: to listen to the speakers and build working relationships with those friendly to the cause. 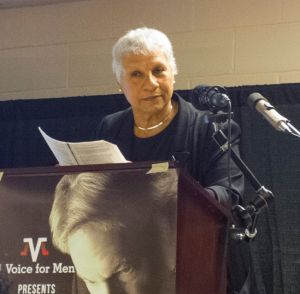 I found the conference highly enjoyable. So did much of the audience, giving many standing ovations. The speakers were dynamic and diverse in their methods of delivery, from the sage presence of Senator Anne Cools, to the heroic yet frail Erin Pizzey, to the incisive wit of Dr. Tara Palmatier, to the soothing fatherly storytelling of Tom Golden.

Mike Buchanan’s presentation about men’s issues political groups was provocative. Karen Straughn’s critiques of early feminism were just as merciless as they were scholarly. Terry Popp spoke about the experience of divorced military men with calm conviction and the insight of hard experience.

Carnell Smith’s discussion of paternity fraud was as passionate as it was humorous. Dr. Farrell’s presentation was compassionate as always, and I was glad to see how highly he prioritized boys’ education issues. And Stefan Molyneux was perhaps the most engaging speaker, often conversing directly with individuals in the audience.

I could go on about the speakers, but the reality is that you have to see them in action for yourself. I believe there will eventually be a documentary/DVD of the conference that you can buy from AVfM. In the meantime, consider this list of direct links to individual speeches (currently incomplete).

In an incredibly humble act, Paul Elam presented the VFW commander with a check for $2,000, thanking veterans for their service both past and present: 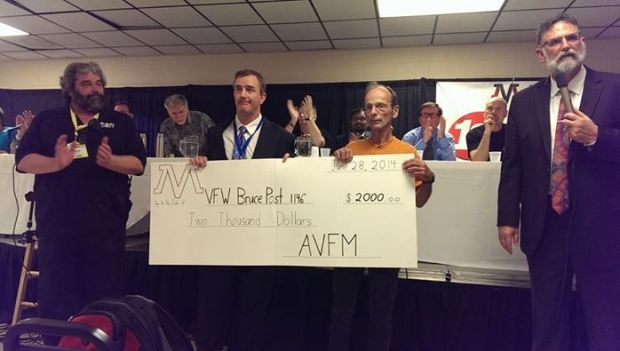 The last event was the panel on activism. I was honored to sit next to Dr. Farrell (among others, of course). This was a chance for panelists to provide the audience with recommendations for effective activism and answer some of the questions raised by the audience.

There were plenty of questions, and unfortunately we weren’t able to get to all of them. But it was definitely a rewarding experience. You can watch the panelists speak at the end of the ten-hour video posted earlier in this article.

All in all, the conference was a huge success. The AVfM staff worked extremely hard to make sure it happened, and they all deserve a round of applause. Also, consider donating to their quarterly fundraiser.

I didn’t even look at any of the press until well after the event. There were the expected hit pieces featuring the lies men’s advocates had come to know well. But so what. At this point it does not matter what our opponents do or do not do, what they say or do not say. They can no longer ignore us, so they attack us. But attacking us has consistently only served to bring us more sympathizers. And this trend is set to continue indefinitely.

Also, this conference represents a huge milestone for the movement, which is finally coalescing into something tangible. A sense of community and camaraderie has been created with this conference. Many people who existed only as screen names were finally able to put a face to the name. And there is also a sense of “we’re here, and we’ve come this far. We’re not going back, ever.”

There has been positive press coverage as well. Glenn Reynolds wrote an excellent article about the conference for USA Today (a national publication that had interviewed me last year about college men’s centers). There was also a nice article by Dr. Helen Smith at PJ Media. Paul Elam and Karen Straughan, as well as the other speakers, participated in numerous interviews. I myself was glad to be interviewed by Fusion Media and PJTV regarding my work with AVFMS.

We will likely continue to see more and more press coverage over the next several days. Plans for the next conference are already underway. As to its location and the list of speakers, only the future will tell.

Ladies, Matt Forney wants to be your daddy