Robert St. Estephe–Gonzo Historian–is dedicated to uncovering the forgotten past of marginalizing men. “Gonzo journalism” is characterized as tending “to favor style over fact to achieve accuracy.” Yet history – especially “social history” – is written by ideologues who distort and bury facts in order to achieve an agenda. “Gonzo” writing is seen as unorthodox and surprising. Yet, in the 21st century subjectivity, distortion and outright lying in non-fiction writing is the norm. Fraud is the new orthodoxy. Consequently, integrity is the new “transgressive.”

Welcome to the disruptive world of facts, the world of Gonzo History.

The Alimony Club of Illinois, founded by Dr. and Mrs. Vernon P. Cooley, represents the second formally established anti-alimony organization in the US. The first, American Alimony Payers Protective Association, was founded a month earler (May 1927) in New York City by Robert Ecob. The office of the Alimony Club of Illinois opened on August 2, 1927 at 189 West Madison Street in Chicago.

As Dr. Cooley fought against his gold-digging wife in Chicago court he was inspired to organize the men sitting in jail for non-payment of alimony into a formal lobby for reform. Shortly after announcing his plan to the newspapers he received a letter threatening to bomb his home if he did not drop his court actions against his ex-wife.

It is important to note that anti-alimony was not regarded as anti-child support (even though many jurisdictions used “alimony” judgments to cover child support as well as gold-digger support). The Alimony Club of Illinois did indeed extend assistance to ex-wives who were attempting to collect child support from ex-husbands.

The early months of the Alimony Club of Illinois are well-documented. Following are two articles of particular note, the second of them penned by Dr. Cooley himself.

To stop the indiscriminate awarding of alimony to gold-digging parasitic women.

The Alimony club of Illinois was created for the purpose of preserving the American home from disintegration, the abolition of legalized white slavery, the prevention of fraud and perjury and to eliminate forever the imprisonment of men for non-payment of alimony to conscienceless, vindictive wives who apparently delight in the prosecution an humiliation of “The goose that laid the golden egg.”

Because there apparently exists in Chicago no organization founded for humanitarian purposes, to which those wishing help and advice might turn with some assurance of immediate and concrete help, the creation of such an organization as this was imperative.

Primarily the intent of the law with reference to alimony was to reward a faithful, loving wife who had done her duty to her home and family.

How far we have retrograded from the original purpose of this beneficent law may be gleaned from the fact that today the securing of alimony is a highly specialized, vicious industry, made possible by an alliance between perjurers, unscrupulous attorneys and politicians.

Does a man, after divorce, owe his wife a greater duty than while the marital relations existed, in that she may commit with impunity low and degraded, be guilty of improper friendship with other men, and still receive alimony? You cannot reconcile these two ideas.

This club is to save ex-husbands from the persecution of such women.

FULL TEXT (Article 2 of 2): With the alimony problem becoming a question of the hour among judges, the clergy, and many citizens, a new sensation developed yesterday when Dr. Vernon P. Cooley, whose alimony case started the discussion, received an anonymous letter, printed in a feminine head, threatening to bomb his home.

Dr. Cooley has announced a finish a finish fight in the courts against “gold-digger” wives, who view marriage simply as an aid to alimony. Frank Johnston Jr., until recently a judge of the Appellate court, has promised to present the case for Dr. Cooley to the Illinois Supreme court.

“You and Johnston better let well enough alone unless you and your present wife want to be exposed,” the letter stated. “And what’s more your home will be bombed when you least expect it. Take warning. One Who Knows. Johnston will get his share too.” The letter was given to federal authorities.

While Dr. Cooley and his present wife, Mrs. Bessie Cooley, expressed a determination to proceed with their plans to form an association of alimony victims, and to present a strong demand for consideration in the courts. Chief Justice Joseph Sabath of the Superior court, who has heard 25,000 divorce cases – more than any other judge in the world – revealed his knowledge of the women he labeled the “alimony adventuress.”

“I have known women to come into my court who were receiving alimony from three husbands, Judge Sabath said. “There have been many cases where two husbands were paying.”

“Of course, the laws specifies that when a divorced woman remarries, her alimony from the former husband ceases at once. But these women deceived their former mates, and continued to collect – extort would be a better word – from them. When we learn of such cases, the courts make short shrift of these adventuresses.

“Unless they set a better prospect, these women – I have had any number of them before me demanding alimony – stay single, and for years they live, riotously and often immorality, on this deliberately gotten bounty.

“And our upper courts have held that no matter how depraved these women become, the alimony must go on, with the ex-husband paying for the liquor, the gigolos, and the love nest.”

Superior Judge Harry A. Lewis had an alimony seeking women before him yesterday and urged her to free her husband with a divorce or become reconciled with him. The wife, Mrs. Belle Glicksman, had sued for separate maintenance, demanding support from Aaron Glicksman, who owns a leather shop at 2223 Montrose boulevard.

“Why should you hang on this man’s neck the rest of his life?” the judge demanded. “You want his money, but you don’t want to live with him. Man’s natural instincts move him to mate, and you are deliberately heading him to sin by your refusal to free him. Court can’t make a man virtuous.”

Some photos of the second earliest known formal Men’s Rights organization in the U.S. 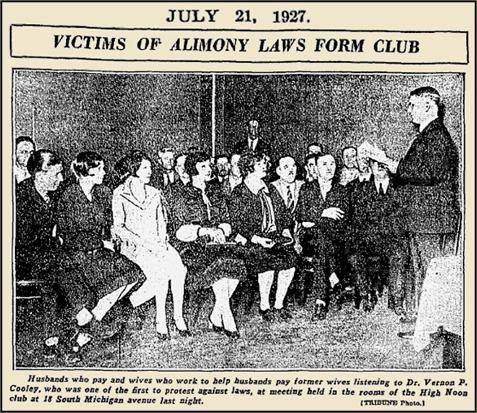