Is Slippery Rock University’s psychology department a horrible place to be a male teacher? This lawsuit says yes.

Although I usually write about students at my site A Voice for Male Students, far be it from me to refrain from covering issues affecting male teachers—especially those brave enough to take a stand against anti-male bias in academia. From Pennsylvania’s Trib Total Media, we have this recent story:

A male assistant psychology professor claims in a federal lawsuit filed Thursday that his colleagues in the otherwise all-female psychology department at Slippery Rock University have harassed him because he has complained about bias against men at the university.

Let it be known that we have officially entered into the era of filing lawsuits en masse against universities that demonstrate anti-male bias, particularly concerning male students falsely accused of sexual assault and railroaded off campus.

At first I was interested in learning what kind of bias is alleged in this new lawsuit. Is it simply a few sexist remarks about men made by a few psychology profs, or something else? The article continues:

But this is something very different. Neibauer is claiming that the department preferred less qualified applicants of an overrepresented group on the basis of sex. How did the department respond? According to Neibauer, retaliation:

Neibauer’s protests led to a meeting where the other professors harassed him and forced him to leave, with one of them saying, “Now you know what it’s like to be bullied,” the lawsuit says.

Ah, is that the characteristic and all-too-predictable “it’s our turn to be sexists now” mentality that we have come to know and love in modern academia? You know, the “you go, girl” attitude where what would be characterized as abuse if done by men is celebrated when done by women? Given how often misandry in academia is rationalized, I would hardly be surprised.

Christopher Neibauer of Butler says in the lawsuit that he’s been given less favorable class assignments and excluded from department meetings because of his complaints.

The exclusion from meetings may be one of the stronger points in his case if it can be proven, and especially if the university cannot prove any misconduct or unprofessionalism (a loaded and often abused word in these academic times) on his part.

That’s the Trib Total Media story. Let’s go ahead and get past the fact that many feminists will spin this story as a misogynistic man who is getting his comeuppance. But then there are some other relevant bits from another article, this time the Pittsburgh Post-Gazette, that might contradict that:

According to the complaint, Mr. Niebauer protested in 2005 when others in the department refused to hire a woman “because she was pregnant.”

I would like to hear her side of the story.

Later he repeatedly protested the hiring of women who were, in his estimation, less qualified than male applicants. He was then subjected to investigations, deprived of lab space and given less desirable class assignments, according to the complaint. He has been unable to advance to full professor, he alleged.

Everyone who has sat behind a teacher’s desk long enough knows that—right or wrong—you have to toe the departmental line, and doing otherwise will most like be fatal to your academic career. This is especially true in the humanities at many universities when it comes to anti-male bias.

So who are these colleagues of his in SRU’s psychology department? Since it is only fair, I am tagging their names to this post. That way we can increase the visibility of this case whenever people search for them or their department. We can’t really expect Title IX coordinators to maintain an effective paper trail on these people, and prospective students and teachers need to have adequate warning of the alleged activity.

So we’ll just call that “leveling the playing field.” Their names are:

Again, SRU’s psychology department is—with the exception of Christopher Neibauer—entirely staffed by women. How common is that?

This is a good time for me to pull out my recently developed graph on the top 10 bachelor’s degrees conferred by sex. Note how many psychology degrees are awarded overall, what position the degree field holds in the top 10, and what proportion of psychology degree recipients are women: 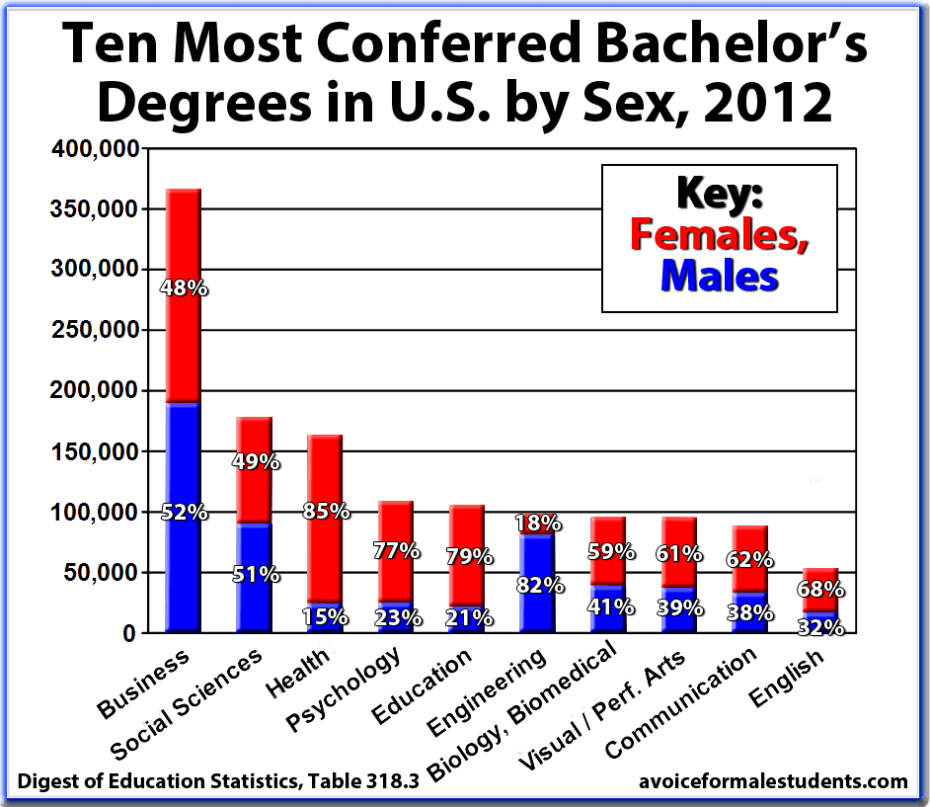 Certainly, some of the over-representation of women in psychology may be due to simple career choices. But is there also a bias against males in the psychology community?

Psychotherapist and men’s advocate Tom Golden certainly had quite a bit to say on that subject in his article “MNI—Misandry in Psychological Research.” Paul Elam, founder of A Voice for Men, has also spoken about anti-male bias as a counselor. Both their accounts are well worth a read.

Let’s keep an eye on Christopher Neibauer’s case. It will be interesting to see how it plays out.

A version of this article originally appeared on the website A Voice for Male Students.

Did feminists really win the vote for women?