Another growing threat to the memory of the Six Million is when the Holocaust becomes grist for inappropriate Nazi and/or Hitler  comparisons. Particularly in the United States, Holocaust trivialization has seeped into the mainstream….

It must be our commitment to remember and to constantly speak out against those who would trivialize, distort or deny the Holocaust and to inoculate the public against trivialization….

So continues the saga of Pauley Perrette, our nation’s most famous  restraining order abuser, documentation included as usual. It seems as though Our Dear Pauley, early in her decade-long quest to destroy ex-husband Coyote Shivers with harassment and false allegations, took to social media and compared her divorce to the Holocaust and herself to a Holocaust survivor. 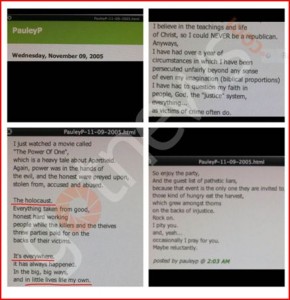 That’s right, those are her words. We couldn’t make this stuff up. Isn’t it bad enough that Perrette has manipulated the court and compromised public officials and unethical attorneys into doing her dirty work? Did she also need to insult the victims, survivors, families, friends, and descendants of the Holocaust of Nazi Germany? Millions imprisoned, enslaved, starved, tortured, and murdered in cold blood, all just exactly like poor Pauley Perrette’s divorce. How is it remotely possible that someone could compare a contentious divorce (which she herself made contentious) to one of the most egregious horrors this world has ever seen?

Quite the little drama queen, isn’t she? Or possibly a few fries short of a Happy Meal. Could she possibly be that deluded? If so, the psychiatric industry has some very nice facilities that can help with such issues, but that is entirely beside the point. All the cray-cray cred on this planet does not excuse Perrette’s narcissistic and arrogant contempt for the suffering of people whom she clearly sees as nothing more than extras on the set of a bio-pic called Star Crazy.

Due to this appalling act of extreme insensitivity, AVfM has faxed this letter to Perrette’s attorney, Mr. Larry Stein of Los Angeles, demanding a public apology:

Re: Demand for Apology, Your Client “Pauley Perrette”

Comparing her divorce to the Holocaust

A Voice for Men respectfully demands that your client, Pauley Perrette, an actress on the television program “NCIS,” issues an immediate public apology for comparing her divorce to the “Holocaust” and for describing herself as a “Holocaust Victim.”

It is not bad enough that your client has engaged in a decade long pattern of Internet hate campaigns, provably false allegations, and vexatious restraining order abuse against her ex-husband; but Pauley Perrette’s public statements and social media postings that she is a “Holocaust Victim” are beyond the pale and abhorrent. You should be personally embarrassed and ashamed as well.

This extreme insensitivity by Ms. Perrette is offensive to the memory of the six million Jews slaughtered, as well as the actual Holocaust Survivors and Jewish communities everywhere impacted by articles regarding this shameful and degrading reference by Ms. Perrrette.

We respectfully demand that Ms. Perrette immediately issue a public apology, and that you forward a written copy of that apology to this organization.

Founder & Publisher, A Voice for Men

Frankly, we suspect we won’t get a reply, so we took the liberty of sending copies to the following parties:

In His Own Words: Conned by a female sociopath