In 1869 John Stuart Mill published his gynocentric work The Subjection of Women (SOW), stating that while people everywhere were being freed from social roles, women remained tethered to theirs, stating: “Men hold women in subjection by representing to them meekness, submissiveness, and resignation of all individual will into the hands of a man, as an essential part of sexual attractiveness.” (SOW, p. 272). Ironically, Mill sympathizes with women’s subjection while lauding the male chivalry that women both inspired and were recipients of. Mill contends that male chivalry, however, was not always reliable and thus must give way to a more reliable, State-enforced protection and benevolence toward women.

In light of Mill’s gynocentrism, Ernest Belfort Bax published an incisive rejoinder to the book pointing out the greater injustices faced by men.

The following is a quote from Mill’s venerated SOW – PW

The moral influence of women: chivalry 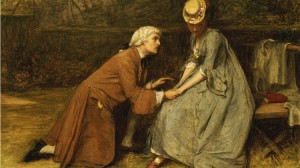 The other mode in which the effect of women’s opinion has been conspicuous is by giving a powerful stimulus to those qualities in men which, not being themselves trained in, it was necessary for them that they should find in their protectors. Courage, and the military virtues generally, have at all times been greatly indebted to the desire which men felt of being admired by women: and the stimulus reaches far beyond this one class of eminent qualities, since, by a very natural effect of their position, the best passport to the admiration and favour of women has always been to be thought highly of by men.

From the combination of the two kinds of moral influence thus exercised by women, arose the spirit of chivalry: the peculiarity of which is to aim at combining the highest standard of the warlike qualities with the cultivation of a totally different class of virtues – those of gentleness, generosity, and self-abnegation towards the non-military and defenseless classes generally, and a special submission and worship directed towards women; who were distinguished from the other defenceless classes by the high rewards which they had it in their power voluntarily to bestow on those who endeavoured to earn their favour, instead of extorting their subjection.

Though the practice of chivalry fell even more sadly short of its theoretic standard than practice generally falls below theory, it remains one of the most precious monuments of the moral history of our race; as a remarkable instance of a concerted and organised attempt by a most disorganised and distracted society, to raise up and carry into practice a moral ideal greatly in advance of its social condition and institutions; so much so as to have been completely frustrated in the main object, yet never entirely inefficacious, and which has left a most sensible, and for the most part a highly valuable impress on the ideas and feelings of all subsequent times.

The chivalrous ideal is the acme of the influence of women’s sentiments on the moral cultivation of mankind: and if women are to remain in their subordinate situation, it were greatly to be lamented that the chivalrous standard should have passed away, for it is the only one at all capable of mitigating the demoralising influences of that position. But the changes in the general state of the species rendered inevitable the substitution of a totally different ideal of morality for the chivalrous one.

Chivalry was the attempt to infuse moral elements into a state of society in which everything depended for good or evil on individual prowess, under the softening influences of individual delicacy and generosity. In modern societies, all things, even in the military department of affairs, are decided, not by individual effort, but by the combined operations of numbers; while the main occupation of society has changed from fighting to business, from military to industrial life. The exigencies of the new life are no more exclusive of the virtues of generosity than those of the old, but it no longer entirely depends on them.

The main foundations of the moral life of modern times must be justice and prudence; the respect of each for the rights of every other, and the ability of each to take care of himself. Chivalry left without legal check all those forms of wrong which reigned unpunished throughout society; it only encouraged a few to do right in preference to wrong, by the direction it gave to the instruments of praise and admiration. But the real dependence of morality must always be upon its penal sanctions – its power to deter from evil. The security of society cannot rest on merely rendering honour to right, a motive so comparatively weak in all but a few, and which on very many does not operate at all.

Modern society is able to repress wrong through all departments of life, by a fit exertion of the superior strength which civilisation has given it, and thus to render the existence of the weaker members of society (no longer defenseless but protected by law) tolerable to them, without reliance on the chivalrous feelings of those who are in a position to tyrannise. The beauties and graces of the chivalrous character are still what they were, but the rights of the weak, and the general comfort of human life, now rest on a far surer and steadier support; or rather, they do so in every relation of life except the conjugal.

Funding an end to fundraisers

Boys were invited to slap a girl