Myth vs. reality: Universal suffrage in the UK

The popular belief is that the suffragettes won the vote for women and before that men already had the vote. Both these beliefs are false. 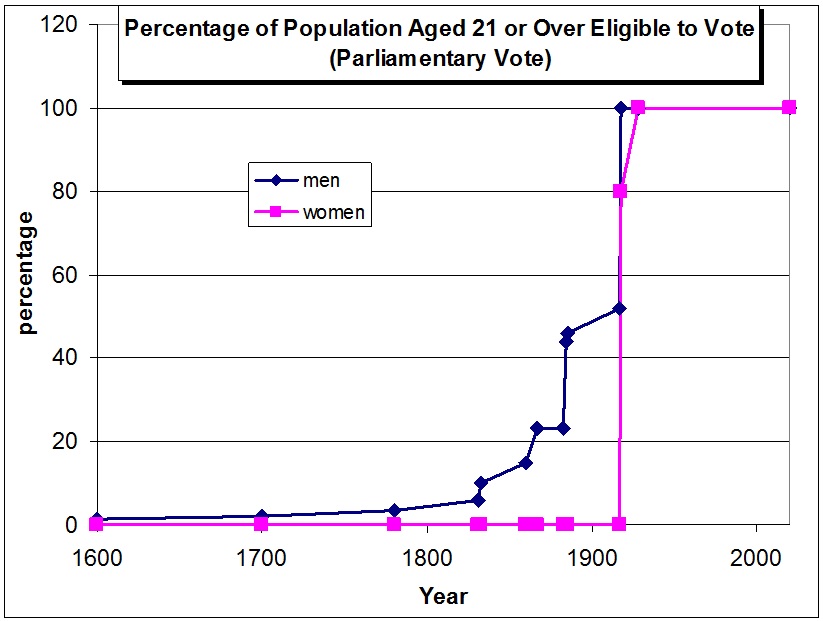 What follows is a story that almost no one knows about the true history of universal suffrage in the UK. I have pieced it together partly by reading the parliamentary records from 1917 (these records are known as Hansard).

The true history of universal suffrage in the UK is the history of the working-class struggle, not a gendered issue at all.

The property-based right to vote goes back at least to King Henry VI in 1432, when it was established that only people owning property worth 40 shillings or more could vote. Since this sum remained unchanged over centuries, the natural effect of inflation was to increase the size of the electorate. But even by the eighteenth century, the electorate was still only about 1% or 2% of the population (though virtually all men).

During the Victorian era, there were three reform acts that together increased the proportion of men eligible to vote to about 50%. As an illustration of the unreliable, partisan commentary you will find on websites on the issue of the franchise, consider this quote from Ref. 1:

Political changes were very slow in coming from 1750 to 1900. Those that did come in 1832 and 1867 were seen as not changing a great deal especially as neither gave women the right to vote.

This fatuous remark dismisses the reform acts as unimportant on the grounds that they did not give the vote to women. But these acts increased the male franchise from almost nothing to half the adult male population, hardly an insignificant matter. And hardly insignificant even if your whole focus is on women because, without men pioneering a broader franchise, the ground would not have been prepared for women to do so later. It is a fine illustration of how a gynocentric mindset fails to appreciate that the fates of men and women are interwoven.

The years immediately before the First World War (WWI) were the most active period for the suffragists campaigning for the vote for women. But throughout WWI only about half of men aged 21 and over had the vote. Most of the men killed or maimed in that war did not have the vote.

The popular version of the story of how women got the vote is summarised in Ref. 2:

The standard version of the story of the fight for female suffrage sees it as a straight contest between the suffragettes and a chauvinistic male establishment, headed – not to say embodied – by the prime minister, Asquith, and encompassing blinkered politicians, burly policemen and brutal prison warders. This [traditional] version has the merit of simplicity, with obvious heroes and villains, which makes it well suited to general public consumption; unfortunately it ignores some of the important paradoxes of the story.

That is an understatement. The standard version of the story is completely incorrect.

The principal misunderstanding that I wish to expose is that before WWI the main barrier to women being granted the vote was not the absence of support for the idea among (male) politicians. On the contrary, there was widespread support within the Liberal and Labour parties. Ref. 2 tells us:

On the whole male politicians were by no means opposed to some form of female suffrage. The Labour Party supported it, and leading figures like Keir Hardie and George Lansbury were deeply involved in the issue, Lansbury to such an extent that he voluntarily, though unsuccessfully, put himself up for re-election in his Bow and Bromley constituency on a female suffrage platform. A substantial section of the Liberal Party, quite possibly the majority, supported it, as did many leading Liberals, including Churchill, Lloyd George and Sir Edward Grey.

In view of such widespread support for their cause, why did the suffragists fail to win the vote earlier? The answer is, with delicious irony, their sexism.

They campaigned for “Votes for Women,” but they should have campaigned for “Votes for All.” They failed to understand the nature of the obstacle to their enfranchisement. It was not lack of male politicians’ support. The obstacle was that working-class men did not have the vote, and it was politically essential for working-class men to get the vote before it became possible for women.

Prior to WWI, there were many attempts to pass bills to permit limited female enfranchisement. All failed. They had to fail for a very simple, purely party-political, reason. Because only men from the upper half of society had the vote, the best that could be offered to women was to give the vote to upper-class women. But the support for female enfranchisement lay in the Labour and Liberal parties. Giving the vote only to upper-class women was perceived as introducing a few million extra Conservative voters into the electorate. So how could the Labour and Liberal parties support it? It would have been electoral suicide. So, those men who were inclined to favour female suffrage nevertheless had to vote it down, while the Conservatives were against it on principle.

So, you see, votes for women were an impossibility unless and until working-class men got the vote—to break the above political deadlock.

By 1916 the British Government realized it had a problem. The electoral process had been shot to pieces by the war. The electoral register had become a nonsense, with the most important voters being away fighting in France and elsewhere, and huge numbers of people in the UK had moved around the country to do essential war work. This led to a fundamental re-think of the franchise.

The extraordinarily egalitarian recommendations of the 1918 Representation of the People Act were summarised by a near contemporaneous US source thus:

The old practice of defining franchises in terms of relationship to property would have to be discontinued, and that in lieu thereof it would be necessary to adopt the principle that suffrage is a personal right inherent in the individual.

This proposal, to extend the franchise to all adult men, enjoyed overwhelming majority support across all parties and in both Houses of Parliament. It was recognised that anything less would be insupportable after the horrors of the trenches. This is absolutely clear from reading the many debates on the act in 1917 as recorded in Hansard. The Home Secretary, George Cave (Conservative) introduced the act as follows:

War by all classes of our countrymen has brought us nearer together, has opened men’s eyes, and removed misunderstandings on all sides. It has made it, I think, impossible that ever again, at all events in the lifetime of the present generation, there should be a revival of the old class feeling which was responsible for so much, and, among other things, for the exclusion for a period, of so many of our population from the class of electors. I think I need say no more to justify this extension of the franchise.

Women got the vote as a virtually automatic collateral consequence of working-class men finally getting the vote. WW1 broke the previous political deadlock.

If the new mood to recognise the rights of working-class men was the result of the slaughter going on in the trenches—and it was—then this perspective suggests that the vote for women was bought with men’s lives. This reality will not be popular in some quarters. It stands in stark and hideous contrast with feminist orthodoxy.

That women got the vote owes more to the Kaiser than to the Pankhursts.

The graph that heads this article tells the true story. With a suitable historical perspective, the bulk of men and women achieved the vote at much the same time. On an historical timescale, the enfranchisement of men hardly preceded that of women significantly.

During WWI most suffragettes suspended their campaigning activities. Many, including Emmeline and Christabel Pankhurst, took to speaking at recruiting drives for the war. The potential recruits would be largely from the working classes and hence would not have the vote. What staggering hypocrisy. The Pankhursts were insistent on their own right to have the vote while remaining safely at home, but at the same time they were happy to send to their deaths men and boys whose right to vote they did not recognise as significant. This must surely rank as one of the most flagrant pieces of amoral, political hypocrisy of all time.

Monstrously, the one action of the suffragettes that really did assist with gaining votes for women was their involvement in sending men away to war. Present-day feminists are culpable because—even with the leisure to put the history into proper focus—they still insist on regarding the suffragettes as triumphing over the hegemony of men. The orthodox feminist narrative is not only inaccurate but disguises a horrible, if unintentional, truth. The “woman good, man bad” worldview is not only false but, in this context, also flagrantly heartless.