Yesterday, I tweeted this. 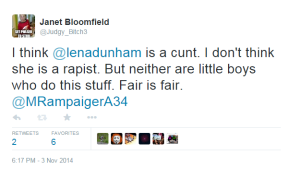 Today, I have a bit more information and I fully retract that tweet. Well, not the part about Lena Dunham being a cunt, but the part about her not being a rapist. Dunham, from a very young age, groomed and sexually assaulted her younger sister and is just bag-of-fucking-hammers stupid enough to think that the rules about using children for sexual gratification do not apply to her.

Guess what, bitch? They do.

Let’s back up a little and I will explain why I sent that tweet. Kids “playing doctor” is pretty normal stuff. I am completely outraged when children are charged with felony offenses or end up on sex offender registries or in sexual harassment classes for stuff that is perfectly innocent and normal. And of course those children are almost always boys. Even in preschool, boys are viewed by predominantly female staff and administration as predators and girls as innocent victims. It’s misandry, pure and simple. Grown women hating men so much that they will vilify, attack, and sanction little boys while giving little girls passes for the same behavior. My tweet came out of a desire to protect children from vindictive women and a few misguided men who see kindergarten boys planting kisses on the cheeks of classmates as sex predators.

I admit I was taken aback by Dunham’s own words in describing the events with her toddler sister and her mother’s reaction, but I chalked it up to, perhaps, excessive interest, but nothing predatory.

“Do we all have uteruses?” I asked my mother when I was seven.

“Yes,” she told me. “We’re born with them, and with all our eggs, but they start out very small. And they aren’t ready to make babies until we’re older.” I look at my sister, now a slim, tough one-year-old, and at her tiny belly. I imagined her eggs inside her, like the sack of spider eggs in Charlotte’s Web, and her uterus, the size of a thimble.

One day, as I sat in our driveway in Long Island playing with blocks and buckets, my curiosity got the best of me. Grace was sitting up, babbling and smiling, and I leaned down between her legs and carefully spread open her vagina. She didn’t resist and when I saw what was inside I shrieked.

My mother came running. “Mama, Mama! Grace has something in there!”

My mother didn’t bother asking why I had opened Grace’s vagina. This was within the spectrum of things I did. She just got on her knees and looked for herself. It quickly became apparent that Grace had stuffed six or seven pebbles in there. My mother removed them patiently while Grace cackled, thrilled that her prank had been a success.

Yeah, it squicked me out, but it still seemed like a bit of weird, innocent exploration.

Then people started tweeting me links to more of Dunham’s own words and the innocence evaporated. Consider these:

… anything a sexual predator might do to woo a small suburban girl I was trying.

Dunham’s interest in her sister’s infant genitals did not abate with maturity, as one would expect.

As she grew, I took to bribing her for her time and affection: one dollar in quarters if I could do her makeup like a “motorcycle chick.” Three pieces of candy if I could kiss her on the lips for five seconds. Whatever she wanted to watch on TV if she would just “relax on me.”

Dunham even posted an image of the “motorcycle chick,” calling her little sister “sex property,” and the only thing screaming through my mind is Where the fuck are your parents?

Where, indeed. Turns out the Dunham parents themselves had some fucked-up ideas about sexuality, boundaries, and age-appropriate visual materials. According to Kevin Williamson, writing for the National Review, [Dunham’s] father, Carroll Dunham, is a painter noted for his primitive brand of highbrow pornography, his canvases anchored by puffy neon-pink labia; her photographer mother filled the family home with nude pictures of herself, “legs spread defiantly.” Sounds delightful. That kind of misguided parenting might potentially explain the young Lena’s uncomfortably bizarre interest in her little sister’s sexual value, but Lena’s story doesn’t end with bribing her sister into kisses or “relaxing” into her.

I shared a bed with my sister, Grace, until I was seventeen years old. She was afraid to sleep alone and would begin asking me around 5:00 P.M. every day whether she could sleep with me. I put on a big show of saying no, taking pleasure in watching her beg and sulk, but eventually I always relented. Her sticky, muscly little body thrashed beside me every night as I read Anne Sexton, watched reruns of SNL, sometimes even as I slipped my hand into my underwear to figure some stuff out.

Grace Dunham’s tweets in response to the controversy  are rather interesting. There is no vigorous defense of her sister, no denials of abuse, no rejection of the accusations against Lena. Grace instead discusses “heternormativity” and “normal behaviors.”

She goes on to insist on the right to decide for herself what behaviors are “harmful.”

Gosh, it seems to me that when Warren Farrell suggested not all incestuous relationships appeared to have devastating emotional consequences, he was roundly decried in the media as a rape and pedophile apologist. Where is the outcry when Grace Dunham appears to be saying the exact same thing?

Finally, Grace encourages us to think about how we “police the sexuality of young women,” and one wonders if the young woman she is talking about is herself or her sister?

Do we think there is merit in policing the sexuality of teenaged men who might like to lie in bed with prepubescent girls and choke the chicken while they’re at it? Willow Smith and her parents sure caught holy hell, and it appears in that case, the chicken was breathing easy the whole time. That didn’t stop Child Services from getting involved. Where are Child Services now?

Hilariously, Dunham has responded to the various media sources reprinting her own words by demanding retractions. Retract what? You wrote the damn book, you idiot. Thankfully, Truth Revolt and Ben Shapiro have a fully functioning set of balls and have told Dunham to go fuck herself.

We refuse. We refuse to withdraw our story or apologize for running it, because quoting a woman’s book does not constitute a “false” story, even if she is a prominent actress and left-wing activist. Lena Dunham may not like our interpretation of her book, but unfortunately for her and her attorneys, she wrote that book – and the First Amendment covers a good deal of material she may not like.

Let’s not beat around the bush here: any man, no matter how famous, no matter how fabulous his left-wing cred, no matter how popular with the feminist in-group, would be facing the media guillotine for writing gleefully about sexually abusing his younger sister or brother. He would also be sitting in a jail cell facing felony charges.

I would never get behind calls to criminally charge Dunham or anyone else for engaging in completely innocent and perfectly normal childhood explorations of bodily differences. This is not what we are dealing with here. Grace Dunham may not feel personally harmed by what her sister did to her, but we live in a wider society in which actions have consequences and laws exist for a reason.

Lena Dunham sexually abused her much younger sister. She is a sex predator, and the fact that she openly, and with no apparent coercion, wrote about that abuse in a decidedly gleeful and unrepentant way suggests that she does not classify her own behavior as anything abusive or even shameful. That makes her a danger to every young woman she comes into contact with.

Lena Dunham is a criminal who has openly admitted to the sexual abuse of a child.

Before all the feminists and left-wingers in the media rush to issue her the standard pussy pass, they might want to ask themselves this: Would you let Lena babysit your daughter? Would you?

Lena Dunham is a sex predator.

Arrest her. Charge her. Convict her. Shouldn’t be hard, given she wrote her own evidence. And then put her where she belongs.

Losses from circumcision: it removes many critical components of male sexual anatomy