To feminists, everything is misogyny… even their own vaginas.

I’ve learned it’s no use to argue with feminists. To them, everything bad, all social ills, customs, all thought are caused by “The Patriarchy” which in turn causes all-pervasive “misogyny,” the hatred of every single woman on earth. If you corner them with facts, they go into an emotional meltdown. Despite learning not to argue with a feminist, I’ll occasionally ask certain questions that I’ve found to be unanswerable under a feminist mindset. One such question is “Is there any social ill or any malady whatsoever that is not caused by “The Patriarchy?”

To a feminist “The Patriarchy”(the belief that there is always a man to blame) is the cause of everything bad, feminism is the cause of all things good. A feminist is unable to give the clear answer, “Of course!” because if it’s bad, men did it; if men did it, it’s bad. Under feminism, being bad and being caused by men are synonymous. What’s more, men cause all things, women are always passive. Something being bad, (or in feminist ‘problematic’) has only one cause; men. “The Patriachy” is really a catchall concept for men being the problem.

“The Patriarchy” has another useful purpose, it can be used to ignore men’s issues. Infant boys being sexually tortured to death? 60 million men being drafted to their death in WWII? Suicide, murder, homelessness? “You people have it coming because Patriarchy!” To a feminist, men suffering disproportionately from virtually every single social ill is proof of their power, and confirms the idea of “The Patriarchy.”

Another question we could ask a feminist, “Apart from feminism, is there anything that is not misogyny?” Under feminism, everything is misogyny, except for feminism. If it’s not feminism, it’s misogyny. This false dichotomy within feminism is one of many. This comes from the wild feminist assertion that feminism is identical to the concept of equality and so if you believe in equality, you believe the totality of feminism. Despite being a common feminist assertion, we see immediately how this is silly. The concept of equality existed long before feminism, does that mean everyone despised every single woman before that? Of course not. That’s all feminism believes, just equality? Nothing about “The Patriarchy”, “Institutional Misogyny, per se.”, “Toxic Masculinity”, “Male Privilege”, or the Duluth Model with assumption of male villainy? Clearly, feminism is not “just about equality.”

Another example within feminism is the rule that when someone loves a woman’s body, that person hates the woman as a person. Therefore it’s misogyny, the hatred of every single woman on the planet. When a woman dresses revealingly, it’s also misogyny, especially if a man sees her. There’s the dichotomy, to love the body is to hate the person. Female breast: misogyny! Vaginas? Misogyny! Your misogyny is revealed because you’re using the word wrong! If a vagina is sexual (hint: it is!) it’s misogyny. A feminist can make an argument for literally everything being misogyny and proof of a patriarchal conspiracy.

This goes so deep, even the use of the very word “vagina” is misogyny to some feminists. Simply go to any of numerous feminist websites or forums and you’ll see some absolutely vicious, knock down feminist fights over the word vagina. You see, to feminists, even their own vaginas is misogyny, especially if you use the word in an unapproved way. Don’t believe me? Here are some example screen shots from various sites: 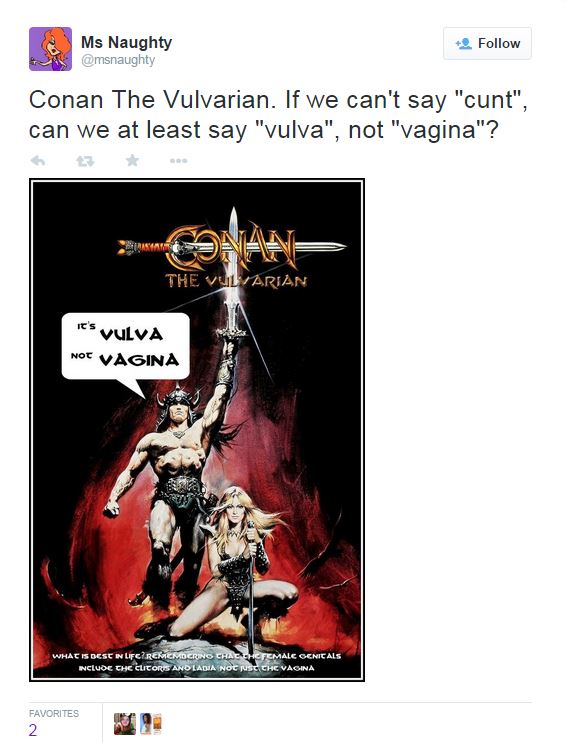 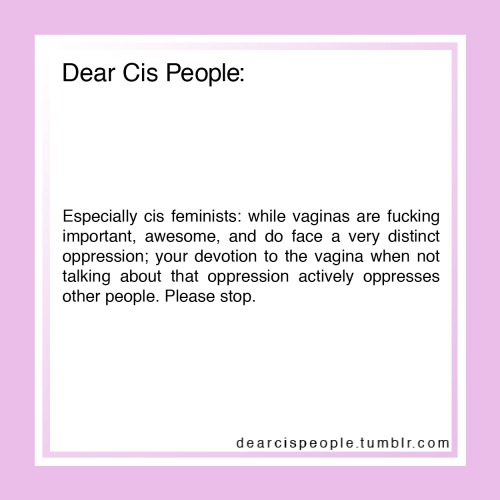 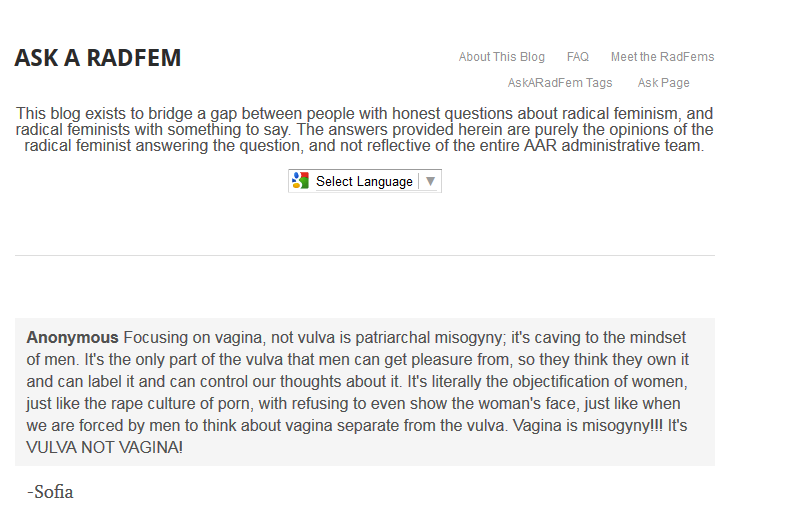 This isn’t the top lunacy of feminism. The real lunacy is the wild disconnect between their view of the problem, and their way to a solution. Feminist solutions include freebleeding, smearing period blood all over their faces, topless protests of catholic churches, calls for a male genocide including #KillAllMen, and the increasingly common tragedy of a feminist who physically or sexually abuses her son for retribution against men in general. A rational person sees that this is not a solution to anything.

Thankfully feminism is a hateful, bigoted ideology in decline. We see leading feminists being compared now in the mainstream to KKK and neo-nazi figures–even though they don’t like it, the comparison is being made more and more. Polls indicate an increasing association of feminism with hatred against men. There’s a corresponding amount of feminist hand waving over that fact. Society is now slowly starting to acknowledge hateful feminist bigotry as a problem rather than any kind of solution. Now those of us who care about men’s issues can undo the damage this bigotry has done and continue working for real solutions..

Woman walks 10 hours in Mumbai and did not get catcalled even once!

1959: Malvina Reynolds sings an awful song that wouldn’t be out of place in today’s misandric world