If I had to single out a prime mover who set the #GamerGate chain of events in motion, Anita Sarkeesian would be my candidate. I grant you that Zoe Quinn was the proximate cause—the spark to the powder keg, if you will—but props to Sarkeesian for filling up that keg in the first place.

For at least a couple of years, Sarkeesian was busily undermining the gamer community in preparation for trouble that was clearly anticipated. So when the planned operation was finally launched, the Zoe Quinn fracas served only as a pretext—a “Gulf of Tonkin” incident to justify aggressive intervention. The time was ripe, Quinn popped up, and it was off to the races!

But the tension had been building for quite a while, and there would have been no #GamerGate without it. And that tension would never have been ratcheted to fever pitch without Sarkeesian’s steady, slow-motion agitprop.

So here’s the condensed version of events since #GamerGate erupted: the other side (meaning the feminists and the authoritarian left) have constructed a threat narrative. The order of the day has been slander, obfuscation, conflation, misrepresentation, and other dirty tricks directed against anybody aligned with #GamerGate or merely imputed to be aligned with it.

This is old stuff for us, since we have studied their modus operandi for years. They make lies fly faster than machine-gun bullets, and it’s humanly impossible to stop all of them. They routinely make unsupported accusations against unnamed people—for example, they claim to receive threats from such people, but we have only their word for this. They hardly ever show the moral gumption to look a real person in the eye and say, “You did x, y, and z!” Instead, they vaguely impute crimes to some vaguely defined “group” or “movement” and insinuate that you too are a part of it … and that’s all, folks!

Let’s get back to the admitted feminist Anita Sarkeesian, who is our person of interest at the moment. Sarkeesian has goaded and bullied the gaming community beyond endurance, and her social justice warrior cohorts have jumped into the fray as if on cue. People on that side have a lot to answer for, but right now I want to make this simple. So I will drag Anita Sarkeesian into the public square for an inquest—her and her alone.

Among other things, Sarkeesian is notorious for constructing threat narratives, and her accounts of reality have been widely doubted. I won’t try to cover all of these but shall drill down into one example only because that example looks superlatively damning.

I want to explore this very, very thoroughly—and if I err on the side of prolixity, so be it!

Among other episodes, Sarkeesian claims to have been menaced by a series of luridly pornographic Twitter tweets, purportedly from a “Kevin Dobson.” She screen-captured the material and shared it on her Twitter feed, and I have posted the item below, with some annotations that I made in Photoshop: 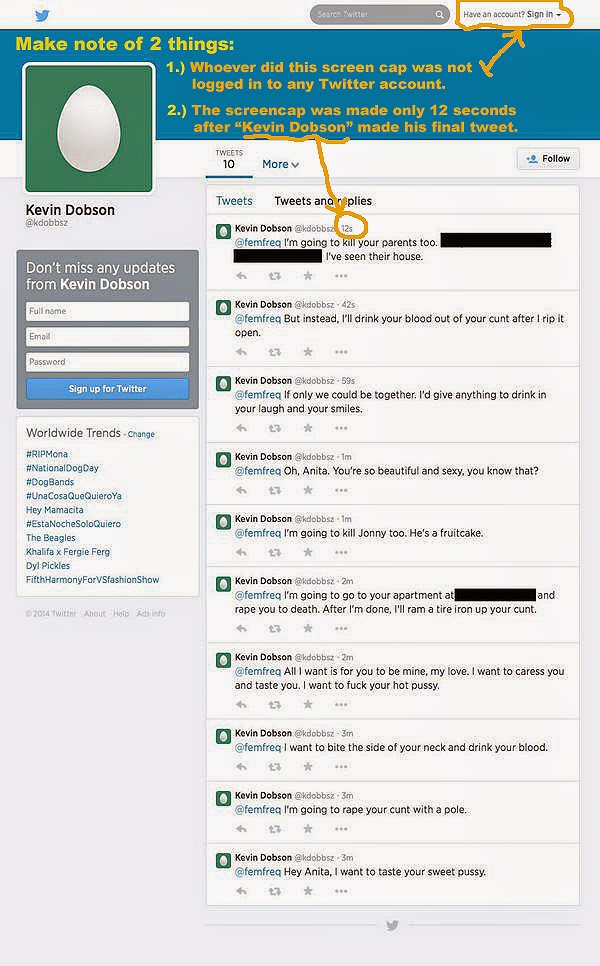 Several things about this ought to command our attention.

On the strength of these points, I will offer a narrative conclusion that seems plausible.

I believe that Anita Sarkeesian has committed a fabrication. I use that term because I don’t know if the apparent action fits the legal definition of “fraud”—I rather doubt that it does in this case.

Let’s review the lines of argument. “Kevin Dobson” posted his 10 tweets in under three minutes. The spelling and grammar are impeccable, which hints at careful thought and composition. Are we to believe that all of this happened in such a brief time frame? I find that odd, but I certainly can’t rule it out.

Moving along: By the evidence of her own screen capture, Sarkeesian arrived on the page a mere 12 seconds after “Kevin Dobson” had posted tweet number 10. This is where improbability poses a serious hindrance to belief. It is only by astonishing coincidence that Sarkeesian could have opened that page in her browser almost immediately after “Kevin Dobson” had finished his activity. There was no compelling reason for her to show up at that precise moment rather than, say, 43 minutes later. The odds were dramatically against this.

If somebody other than Sarkeesian found the Dobson material and made the screencap, the coincidence would be no less remarkable. Either way, the odds were dramatically against it.

But Sarkeesian can offer no such defense. The screencap was clearly made from outside of anybody’s Twitter account, so it remains an astonishing coincidence that anybody got in through such a narrow time window.

One might ask what sort of directed activity would push anybody there, specifically, in the first place? It occurs to me that they might arrive via the Twitter search engine, but as witness the screencap, there is no evidence of this.

To me, it seems that whoever screen-capped the Dobson material already knew  it was there, knew precisely how to get to it, and knew this less than 12 seconds after the material was posted. The weight of probability stacks heavily on that side.

If we assume that “Kevin Dobson” was an authentic personage, we could allow that he made his tweets, logged out of his account, and then made the screencap—which he subsequently sent to Sarkeesian for her to post on her own Twitter feed! But frankly, this theory is so bizarre that I refuse to entertain it further.

On that basis, the only people who could have been “in the know” would have been either Anita herself or both her and a cohort whom she’d previously confided in. Both possibilities reek of fabrication, and the latter would also reek of conspiracy. So again, I believe that the admitted feminist Anita Sarkeesian fabricated the “Kevin Dobson” threat tweets in order to construct a threat narrative and mount a smear campaign against the men and women of #GamerGate.

In my considered opinion, the narrative timeline went like this:

Sarkeesian opened a sock account with Twitter under the name “Kevin Dobson” (@kdobbsz) or had a cohort do this. Then she (or her cohort) composed threatening tweets purportedly by @kdobbsz and posted these in orderly succession within three minutes.

If Sarkeesian (or her cohort) had been wise, she would have logged in to her own Twitter account and then waited some time before making the screencap. But she (or her cohort) failed to do any of this, and it was a costly slip-up. Now, in the interest of leaving no stone unturned, I will address some further concerns.

For example, some might suggest that the screencap was a Photoshop deception meant to fabricate evidence that Sarkeesian had committed fabrication in the first place. It would be easy to “shop” the 12-second time stamp as well as the sign-in link at the upper right. One could also get creative with the time stamps on the various tweets.

But there is zero chance that such a theory would inspire general belief, given that Sarkeesian herself originally posted the screencap exactly as I’ve posted it here—minus my annotations, of course! The Internet never forgets, so let’s call the Wayback Machine to the witness stand:

Sarkeesian has, quite significantly, not deleted the Dobson screencap from her Twitter feed. It’s still up there. She might wish the damn thing would go away, but if she did remove it, it would be obvious to everybody why she had removed it. In fact, it would be tantamount to a confession.

So she is leaving that unfortunate item in situ, likely hoping that if she combines stonewalling with “playing possum” it’ll get buried and forgotten as time rolls along. Honestly, there’s no good move she can make here, but this one looks like the best of a bad lot. Very well, I am 99% convinced that the admitted feminist Anita Sarkeesian fabricated the “Kevin Dobson” threats. I do not state categorically that she has done so but only that I have a strong personal conviction of this. Others may form their own conclusions on the strength of what I have argued.

So this gives us a pretty good idea what Sarkeesian is made of and what she is capable of. I think it throws a compromising light on anything that she might have said or done already—or might say or do in the future.

I’m not the first to take note of this succulent little scandal. Several others have reported on this long before me, but I know I’m the first to placard it boldly on the front page of AVfM under a glaring spotlight. This story hasn’t gotten nearly as much play as it deserves, and frankly, nobody has scooped into the job with half the claws that I am using here.

And I do mean everybody. Yes, I mean you too! Do me a favor and retweet the hell out of the present article. Post it on Facebook also, and send it spiralling through every communication channel that occurs to you. Above all, be sure that the self-admitted feminist Anita Sarkeesian learns all about this. (That would be @femfreq, if you are active on Twitter.) We ought to make this universally known, and etch it indelibly in the public memory.

Anita, since I know that you are reading this, I would love to hear your side of the story too. What’s your take? What have you got to say for yourself? What’s the nitty-gritty lowdown on this “Kevin Dobson” thing, eh? We would all love to hear from you, Anita, and I personally invite you to make your entrance at the AVfM comment section any time the spirit moves you. Don’t be a stranger, Anita.

"No Working Title": An introduction