For those of you that don’t know, feminism has invented yet another form of imaginary male oppression called rape culture. This figment is used by feminists to quash anyone who opposes, or so much as appears to oppose, almost any modern day feminist doctrine. In the “rape culture” fantasy, virtually anything a man says or does that can be contrived as even remotely sexual in nature contributes to the myth and is deemed a threat to the physical safety of women everywhere.

Naturally, you never hear anything about women’s behavior when the feminists are screaming bloody murder. Robin Thicke somehow contributes to rape culture while mention of Miley Cyrus is conveniently absent (at least so far as our “rape culture” goes). And Beyoncé has already declared allegiance to the cult, so she’s off the hook. And there’s no mention of street harassment when it’s rational women catcalling a good-looking young man walking around New York City.

I think you’ll agree that this imaginary victim complex is rooted in hypocrisy and is largely facilitated by corrupt politicians and their minion purple poodles and white knights. And if you’re like me, you’re sick and tired of being labeled a monster by people that know absolutely nothing about you. Males today are hated not because of what we’ve done, but simply because of what we are – male.

Message from feminism: all men victimize all women.

So, as it were, there was a huge fit of feminist hysteria a couple of weeks ago in Halifax, Canada at Dalhousie University’s school of dentistry when it was discovered that a gentlemen’s club had been created online in the form of a private Face Book page where a dozen or so male dentistry students were talking trashy toilet talk centered around some young women who also attend the school. So much was the hysteria, that it made national news headlines.

As it turns out, no criminal charges have been laid for the simple reason that no crime has been committed. But, as expected, the brainwashed leftists continue to crow their misogyny anthem as they are of the opinion their feelings should outweigh free speech and the rule of law. Once again, the feminist mind control police feel they must enforce conformity to a twisted ideology despite not knowing the difference between degrading scribbles on a private Face Book page and the actual commission of a violent crime.

Message from feminism: non-conformists must conform.

However; of greater interest is the publicly funded Canadian Broadcasting Corporation, or CBC, which in itself, is a very leftist, pro-feminist organization. In fact, so much so, I jokingly refer to the CBC as the Communist Broadcasting Corporation. The vast majority of people who post on the CBC’s online blog are very leftist and folks like myself, who lean right, aren’t made to feel overly welcome to say the least.

This is a simple example of how the CBC blocks anything perceived as offensive: 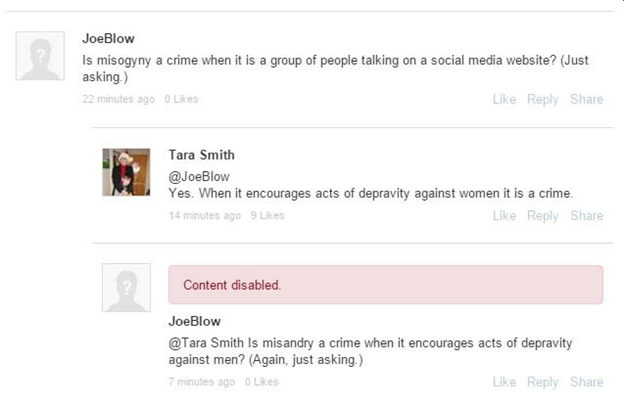 Message from the CBC: intolerance of feminism, real or perceived, will not be tolerated

Perceived misogyny aside, I went back onto the blog with the hope of convincing even a few people that it’s futile to try to control the thoughts and writings of a small group of students who were foolish enough to presumably violate school policy by allegedly posting misogynist rants and hate speech on a Facebook page despite the fact the page was private. Not to mention free speech and the rule of law. After all, is Canada not a free country? Do feminists not have anything better to do than troll Facebook looking for men they find offensive?

Simply put, if you don’t like what’s displayed on a Facebook page, then don’t look at it!

Message from feminism: men should be denied their right to privacy

So I decided to post some hate speech of my own:

Wow! Threatening isn’t it? I’d much prefer soldiering in Afghanistan than reading this dangerous filth! For those of you that don’t know, the underlying humour in this quotation is that it is pure fiction along with its imaginary author Andrew Dworkin.

But better yet, I couldn’t get over how fast three responses were posted all of which were from men rushing to the aid of women everywhere as if women are incapable of breathing without the help of men.

Message from feminism: there is a seemingly endless supply of weak men in the world eager to mindlessly defend feminism 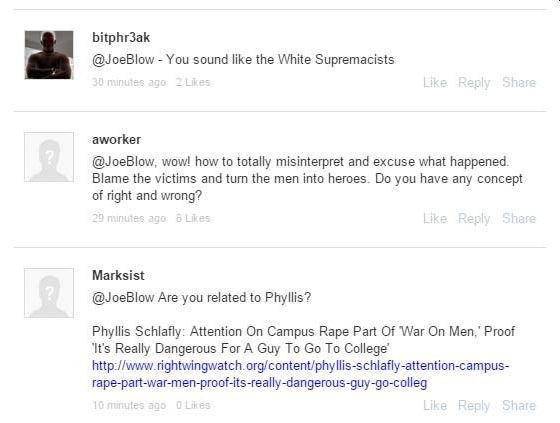 White Supremacist? Totally misinterpreting and excusing what happened? Related to Phyllis who? I was, quite frankly, astounded that these white knights would immediately resort to shaming tactics without so much as asking a single rational question. Shocked? A little I suppose given the speed at which the responses were posted. Surprised? No. I think the blog entries shown above effectively illustrate the white knight mentality here in Canada that is shoot first; ask questions later.

Message from feminism: rational debate with purple poodles and white knights is not possible as they are afraid of men, feminists and facts

So I decided it was time these fools were given a simple history lesson by posting the factual quotation written by none other than that beacon of humanity herself, Andrea Dworkin: 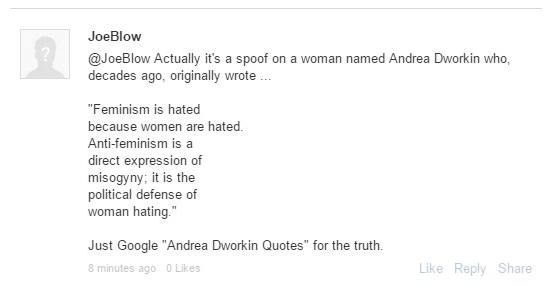 So, as one would expect, the white knights disappeared faster than they had originally appeared. Poof! Gone! Not to be heard from again!

But it gets even better. No sooner did I post the real Andrea Dworkin quote from decades ago, than I was engaged in a simple exchange with a person I’m presuming was female given her online moniker and strong ideological belief in fiction.

Wow! Now this goes to show the extent to which feminism has brainwashed our youth. Feminism today has a very different meaning from the feminism of the 1960s? It acknowledges women’s experiences and creates justice? Justice for who? This little snowflake sounds like she just timetravelled straight out of Pol Pot’s Cambodia!

Message from feminism: feminists know more about feminism than any man

So I decided it was time to melt this little snowflake.

Now anyone who can’t see the hypocrisy here is crazier than Lena Dunham! Anyone who challenges feminism must be shamed and silenced forthwith while anyone who presents cold hard facts as to how evil the roots of feminism truly are is met with feeble attempts at justifying blatant hard-core misandry!

Where were all the white knights now? I guess the smell of feminist bullshit mixed with sound logic triggered an overwhelming fear of being violently offended. I find it rather comical how pro-feminists disappear so quickly when their baseless ideology is challenged using sound factual arguments. I’m not sure who can run faster? A female feminist or a white knight?

Then I was hit with even more feminist knowledge:

Message from feminism: feminists vehemently deny the truth because it directly contradicts their baseless ideology

So I responded with my own set of hard facts from the U.S. Department of Justice Statistics: 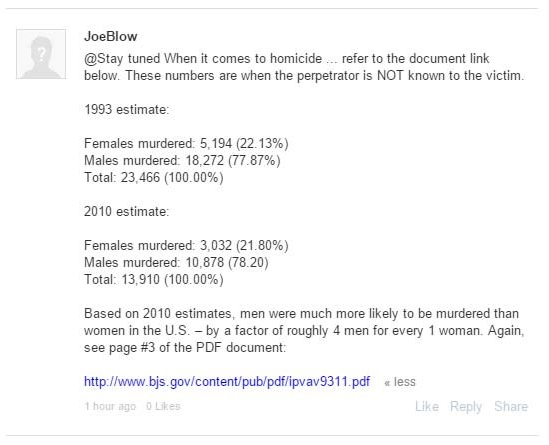 Then I waited for the longest time for a response from my newfound friends but the silence was deafening. So I ended the online learning experience by politely explaining that legitimate men’s rights activists are not about hating anyone. Instead, we’re all about finding the truth.

While men’s rights activists come from a plethora of backgrounds and include both men and women, ultimately we are united for equality as per the dictionary definition of “equality”.

Preferably sooner rather than later, the day will come when words like “feminism” and “sexism” are redefined in dictionaries the world over to accurately reflect their true meanings.

But until then, I’ll keep fighting alongside my fellow activists to put an end to the social poison that is a never ending stream of modern day misandry because no man should have to go through life being treated like some kind of disposable Joe Blow.

Book Review: Stand By Your Manhood