Note: This article is also available in Italian and Farsi.

Imagine the image of a woman, cowering in the corner, shivering, blood running from her nose, as a man, possibly just a faceless silhouette of a man, looms over her with a clenched fist.

For most people with their humanity intact, it is an image that elicits sympathy and outrage, and quite naturally so. Indeed, there are only two kinds of people in this writer’s opinion who look upon this kind of imagery with callous indifference. The first is the small percentage of people who simply have no moral compass, no sense of concern for anyone but themselves.

The other group is the one turning the human decency that deplores the victimization of the weaker by the stronger into a cash cow. That would be most domestic violence advocates.

Yes, it is all but indisputable. Profiteers have now industrialized battered women, reducing them to storefront mannequins for the sake of lining their pockets. They are not only indifferent to the suffering of the victims of intimate partner violence (IPV), but they also count on those (female-only) victims to make a living—even if they have to manufacture them. In keeping with their agenda, they also manufacture false statistics and a wholly fabricated narrative about IPV that is designed not to offer assistance or ameliorate the factors that lead to violence in the home but, in the simplest of terms, to cash in.

One of the most deplorable examples of that in existence today is the so-called “White Ribbon Campaign.” It is largely a worldwide effort to cozen money by playing on the human decency of people concerned about violence in the home. Their modus operandi is to paint a false picture of the problem, identifying its sole source as abusive men and its sole victims as helpless women. It is a calculated deception that flies in the face of virtually all known credible research on the issue, but it is a financial windfall because female-only victims and male-only perpetrators have proven to provide the best incentive for inspiring well-meaning people to give money.

Perhaps the worst of the worst in this worldwide consortium of con artists is the White Ribbon Campaign in Australia. That is an easy conclusion to come to with even a cursory glance at their financials, which are a matter of public record. You can see for yourself. 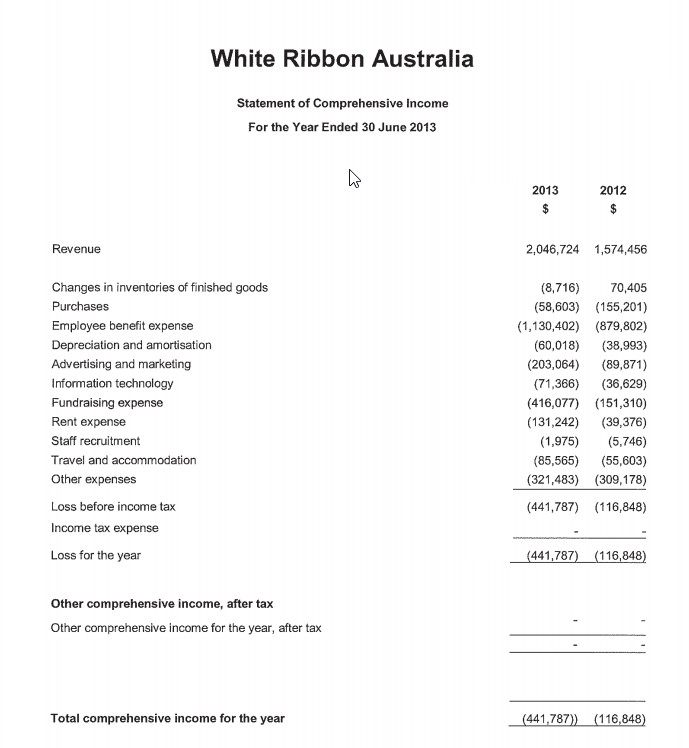 The first thing that is noticeable is that White Ribbon Australia is undergoing some pretty remarkable growth. From 2012 to 2013, the group increased their revenue by over 25%, with an additional half million dollars. It is especially impressive since more than 50% of their gross revenue ends up in the pockets of their staff.

There is one category conspicuously absent from their financial report: services rendered.

While we are admittedly still looking, thus far we have found no evidence that White Ribbon Australia has ever contributed a solid nickel to a single service for actual victims of domestic violence. That includes female victims.

Indeed, as far as we are able to ascertain, White Ribbon Australia operates at a loss largely due to the financial self-indulgence of its staff, and does so strictly by lying to the Australian public about the incidence, severity, and causes of IPV, with the slight caveat that they do provide an online pledge that men are asked to sign saying they won’t beat women.

Lying is a strong word. And it should be backed up with evidence that this is what they are doing. For the next week, we will be providing that evidence on a regular basis on the front page of AVfM, as well as through multiple social media platforms and in concert with other organizations concerned with the corruption that has spread through the domestic violence industry like a stomach virus on a cruise ship.

The first of many examples ahead is the following statement published on White Ribbon Australia’s organizational report: 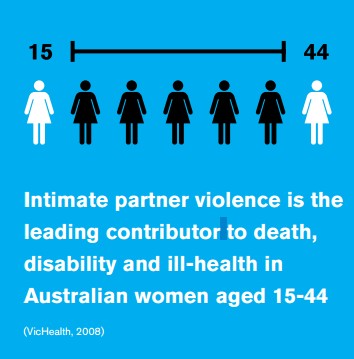 This is patently false, and has been proven as such. 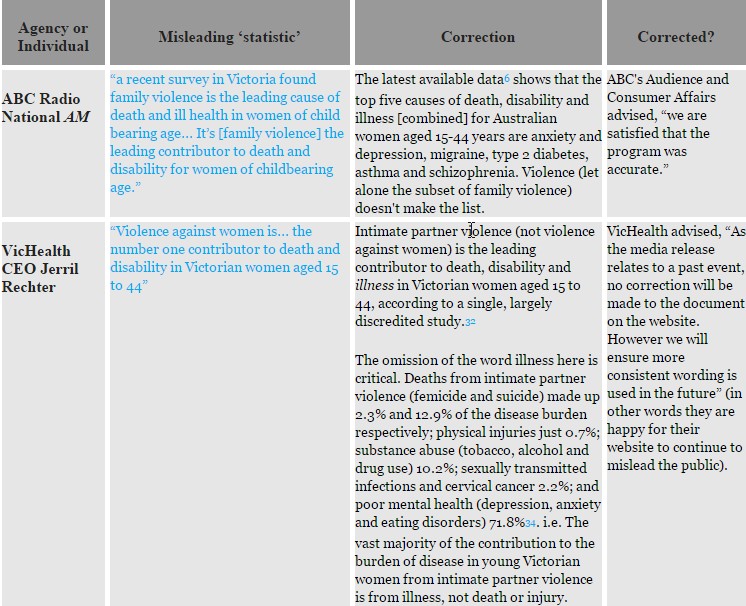 Also, an examination of Australian government statistics on the causes of injury, death, and illness by gender distribution undermines the claim unambiguously: http://www.aihw.gov.au/deaths/causes-of-death/.

We also have to note that even when counting mental illnesses such as depression and chronic anxiety, there is no evidence anywhere that these conditions are caused by IPV. In other words, this is just one big, fat falsehood being sold like “gold” chains by scam artists who can be found on street corners in most major cities.

Psychotherapist Tom Golden demonstrates precisely how this works with the spread of false information through the media here:

And this is no stranger to people involved in White Ribbon Australia.

Consider the case of noted Australian feminist ideologue, IPV “expert,” and White Ribbon celebrity Dr. Michael Flood of the University of Wollongong. Some years back, Flood released a, well, flood of false information and statements about domestic violence, including the following:

Women are far more likely than men to experience a range of controlling tactics and experience violence after separation…. Women’s perpetration of violence is much more often than men’s in self-defence…. Men are more likely to perpetrate … for instrumental reasons.

Dr. Flood was approached by Men’s Health Australia Magazine and asked for research to support these claims. He could not provide it and later admitted that no such research existed.

The facts refuting his statements are as follows:

The Australian Institute of Family Studies (1999) observed that, post-separation, fairly similar proportions of men (55 per cent) and women (62 per cent) reported experiencing physical violence including threats by their former spouse. Self-defense is cited by women as the reason for their use of IPV (including severe violence such as homicide) in a small minority of cases (from 5 to 20 per cent). After analyzing for verbal aggression, fear, violence and control by each gender, husbands are found to be no more controlling than wives.

Dr. Flood’s disinformation made many rounds through worldwide media and he never offered a correction. Not that it would matter. As Golden demonstrates quite clearly, once the lie is out there, the media has an unfortunate habit of sticking to it.

There is a specific and overarching reason that all of this is so important. Decades of clinical experience working with violent families has led me to the inescapable conclusion that the most harm from IPV (very little of it is fatal or seriously physically injurious) is visited on the lives of children who live in homes where one or both parents are violent.

These children are subjected to severe psychosocial stress factors that interfere with their education; lead to drug and alcohol abuse, truancy, delinquency, teen pregnancy, criminality; and perhaps even more importantly lead many of them to enter and maintain abusive relationships as adults.

The false “gendered” model of IPV sold by organizations like White Ribbon Australia not only misses the boat on the science about the problem, but it also contributes to perpetuating the cycle of violence by denying the existence of much of what is happening. By disingenuously painting this as a problem rooted in masculinity, they betray and abandon the children in families with violent mothers, condemning them to suffer ongoing abuse and repeat that cycle as adults. Much of this will lead to even more violence against women, as well as more men and children.

More simply put, the White Ribbon Campaign in Australia is enabling and promoting child abuse in the name of making a buck.

White Ribbon Campaigns in Australia and other countries will not be shaken easily from the corrupt business they are conducting. Their model of IPV, while manufactured and misleading, is the most salable version to a public largely ignorant of the real issues involved.

AVfM will do its part to try, just the same. The very moment this article was published marked a kickoff to our campaign to inform the public that they are being lied to, and that the money they donate to White Ribbon Campaigns does nothing more than make a handful of people affluent while creating still more victims of abuse who will take that dysfunction into future generations.

We will henceforth declare that November 25 of each year is White Ribbon Fraud Day and will dedicate as many resources as possible to outing the deception about IPV that currently profit groups like the one in Australia. One of the best ways to out these hucksters is to name them. The following staff list is provided by White Ribbon Australia: 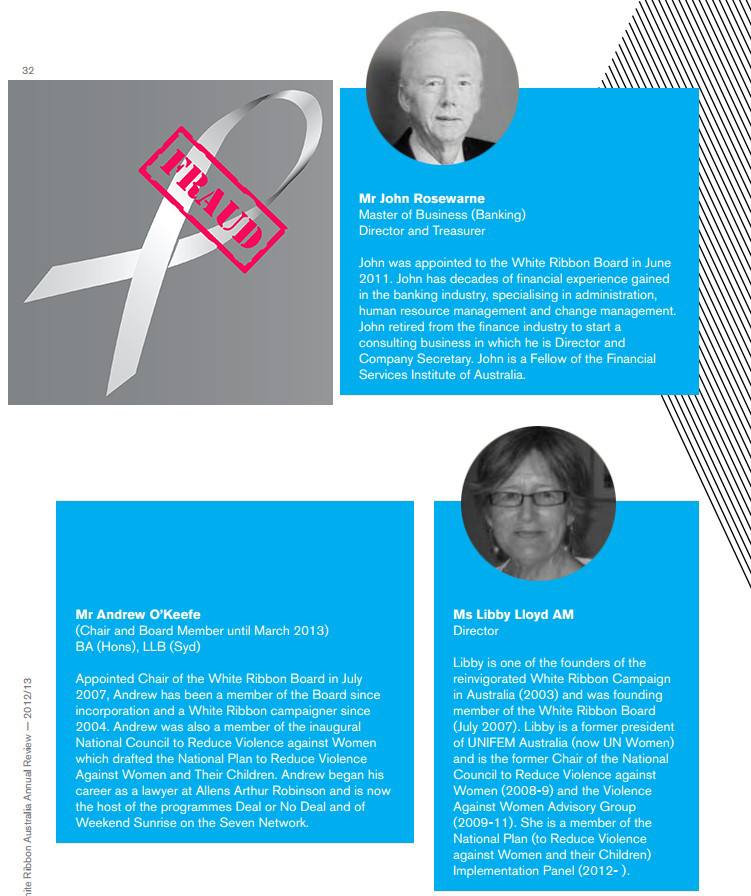 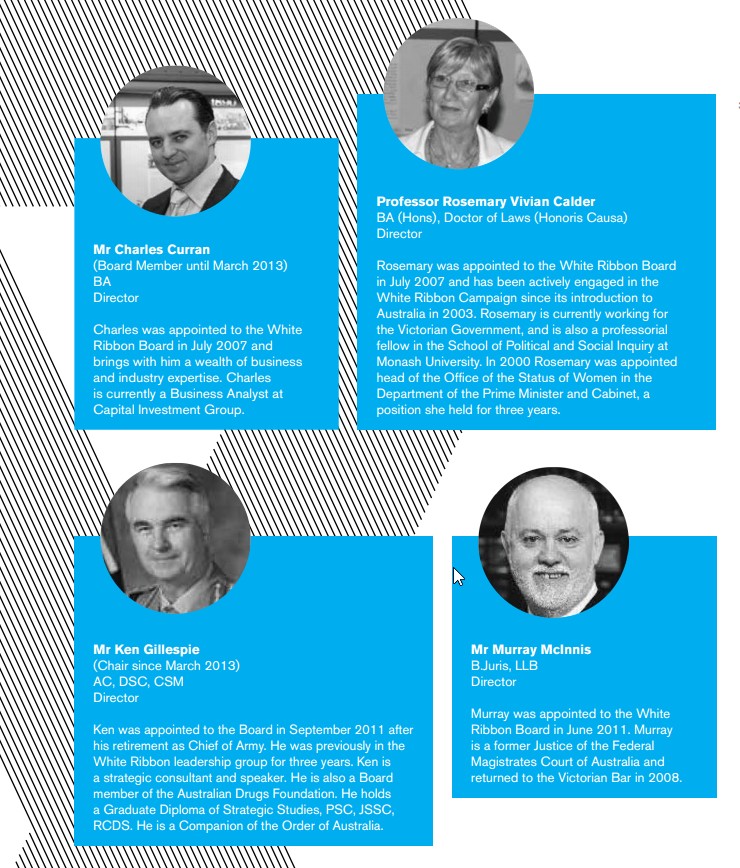 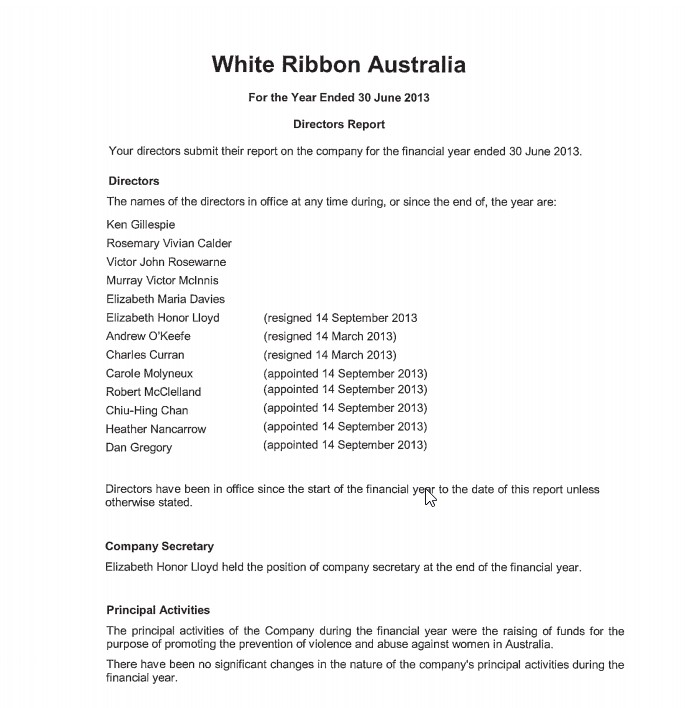 Finally, we will also take the opportunity to promote and refer people to the one White Ribbon organization that is dedicated to evidence-based solutions to this significant social malady.

WhiteRibbon.org is headed by Ms. Erin Pizzey. She is the worldwide founder of the women’s shelter movement and one of the world’s leading experts on IPV. Her website is rich with interviews, radio programming, and articles written by other scholarly authorities on the subject of family violence and whose non-ideological research demonstrates just how far the domestic violence industry has strayed from the truth in order to capitalize on fear and miscalled compassion.

We will aggressively undertake this campaign every year until the domestic violence industry is forced to change in a way that actually serves the purpose of helping victims of IPV rather than satisfying an ideological, financial agenda.

Author’s note: Blanket permission is extended to anyone who wishes to reproduce this article in full for placement on their blogs, websites or any other media platform. Indeed, such reproduction is requested and greatly appreciated.

If pictures of "perfect" women cause self-hate and eating disorders, then why not men?