UFC Fighter Bec Rawlings wants you to know she is free to act, dress, think and talk as she pleases.
One of those thoughts is that “new age feminism” is a destructive force that can “fuck off.”

Some of her offending tweets and retweets are as follows…

When someone tweeted to her that feminists don’t oppose MMA, she tweeted this letter from the New York chapter of  NOW to Andrew Cuomo, which equated the sport with violence against women.

She tweeted out excerpts from this Thought Catalog piece in support of her position. . .

As was to be expected, reaction to her Twitter and Instagram sentiments was swift, condemnatory, and predictable. Indeed, what better way to contravene the claims that feminism “belittles women who don’t conform” than, well, belittle a woman who doesn’t conform. The emblematic riposte was by Sydnie Jones of womensmma.com, who  fell on her fainting couch whilst clutching pearls, but recovered long enough to post a finger wagging rebuke of Rawlings. Chock full of red herrings and condescension, Ms. Jones’ riposte abounds with the gender boilerplate we’ve come to expect. Let’s check a few off and break them down, shall we?

“One True Feminist” fallacy – CHECK! Maybe Ms. Jones believes the People’s Republic Of China actually has regular elections. After all, the word “People’s” is right there in the title. Or maybe she took away from her civics texts that the 1649 Act Of Toleration meant anyone could worship as they wished, and did not decree death for those who denied Nazarene divinity. After all, the word “toleration” is right there in the title. Someone get this woman some Orwell – STAT!

As for the literalist hair-splitting, “new age” is a synonym for “2nd and 3rd wave,” in case Ms. Jones and her fellow Inquisitors were unclear.

Feminism criticizes patriarchal systems of oppression and points out that cultural constructs of masculinity can be detrimental. In fact, it’s ascribing qualities to a gender that limits individuals and demands conformity. If supposedly “masculine” traits, such as non-emotional, aggressive, and competitive, are what constitutes masculinity, then males feel pressure to be those things – regardless of whether they feel that way.

Feminism is good for Da Mehnz, too? – CHECK!

Of course, this “patriarchal system of oppression” is hard to locate. Is it the same system where men at a tech convention can get fired over eavesdropped, misconstrued, public conversations? How does this patriarchy countenance 75% of the homeless having penises? The men of the University of Virginia’s fraternity system, which was shut down (and vandalized) over a hoax, would also like the Patriarchy Hotline, as would the five Hofstra young men of color who spent a terrifying night in jail over a false rape accusation, and were victim blamed while their false accuser went free. “Cultural Constructs of Masculinity?” Feminists certainly cheer lead for the “protector/provider” model when men are jailed for being unable to subsidize a woman’s unilateral reproductive decision.

Maybe we can endeavor to find it together, this “patriarchy.” While we’re at it, I’ll take the liberty of adding the Illuminati and Tri-Lateral Commissions to this scavenger hunt as well.

Of course, like all gender feminists, Ms. Jones makes the unavoidable Freudian slip

‘Equal rights’ is literally the main tenet of feminism. And confronting society’s expectations of women is another core value, with the goal being not conformity, and not even non-conformity, but a culture in which women feel free to be how they want.

“My boys are not monsters…”

The idea that feminism claims all human males are monstrous and awful is, again, not a real tenet of feminism.

Not having my copy of “The Feminist Manifesto” handy, I can only go on what they say, and what I see. So, Ms. Jones, who is it promoting the idea that college men are rape werewolves, whose rape gene gets triggered upon admission, despite all evidence to the contrary (then backpedaling when the numbers don’t add up)? Or maybe it’s those groups of Feminists at Hollaback!, referring to words like “hey beautiful” and “Good morning” as “street harassment.” (I assume they approve of harassment of men in the same city about their body posture)

Who, if not gender feminists, is behind the hegemonic “Duluth Model,” which defines domestic abuse as something men do to women, despite 200+ studies that show gender parity in intimate partner abuse?

“(Rape)nothing more or less than a conscious process of intimidation by which all men keep all women in a state of fear”
“Rape is an historical [sic] condition that underlies all aspects of male-female relationships,”-Susan Brownmiller

So Susan Brownmiller is not a feminist. Who’d a thunk it?

So what of Ms Rawlings’ contention that feminists are silencing people, especially women? Let’s (re) educate Ms. Rawlings’ critics.

Maybe they overlooked that, at Ryerson University, Canadian Federation for Equality and similar groups were banned by the Student Union from organizing events on campus, under the thin pretext of their “misogyny.” Under this rule, they attempted to extort security fees for the lecture of Karen Straughan in a scheme that would make Michael Franzese blush. Karen was only allowed to speak when the President, Sheldon Levy, intervened.  The catalyst for the censorship rule? Two WOMEN sought to organize a men’s issues group on campus.

Or maybe they have no idea that the woman who started the women’s shelter movement was literally run out of her country by feminist death threats for saying women were just as violent in relationships as men.

Gender feminism is hegemonic among MMA media like most sports media, so any use of the word with a whiff of detectable impudence is met with the same accommodation as a roach crawling across your dinner plate, as the Rawlings matter has demonstrated. Indeed, using the term “feminist jurisprudence” gets you a warning on MMAFighting.com. 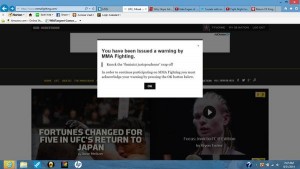 Any criticism of Ronda Rousey brings white knights out like cicadas in mating season. Engage in reasoned debate on sensitive subjects, and get banned (see comments of kosezky). These same people were (rightfully) indignant when a fighter beat a woman half to death. However, in light of their indifference after War Machine got light or no sentences and continued to fight after beating the piss out of man after man after man, (CagePotato.com being the exception), their hands are not exactly clean. There are countervailing voices who mock white knights and critique the feminist undercurrent, but they are few and far between.

Rawlings has, in microcosm, exposed threadbare how the ideology not only chases its own tail, but often devours it. Women’s MMA has skyrocketed in popularity, yet when NOW seeks to ban MMA, they are denying women as well as men employment opportunities.  That they had no reservations in heaping invective and ridicule upon Rawlings, whilst making no attempt to “educate” NOW, the feminist hegemon, about their misguided obstructionism and smearing of the sport they love, is telling, an object lesson in Voltaire’s old saw about how to know who rules you.

Bec Rawlings had the courage to speak truth to this hegemony, accept the slings and arrows, and continues to own her words, not backing down, a luxury afforded few men.  For truly being a “strong woman,” she is to be saluted. And to her critics, we kindly invite them to. . .well, Bec said it best.

Did John Hembling plagiarize an article by Jim Lobe?