Imagine one night you are accosted by strangers, bound, stuffed into the back of a car and driven to a building where you are put in a cage. Your family has to pay ransom to get you back, but not until after your captors have interrogated you, accused you of a reprehensible act, publicly attacked your reputation, and threatened to throw you back in the cage as retribution for your alleged wrongdoing. It’s up to you to prove the allegation wrong, or it’s the cage for you.

No, you have no recourse for the kidnapping and mental torture. No, you can’t get your money back. No, you can’t even get your name fully cleared, and you’re going to have to fight tooth and nail to get it mostly cleared.

And by the way, you’re not allowed to tell anyone who your accuser is, because the nature of what you’re accused of makes that illegal.

That’s the position Mark Pearson found himself in when he was arrested and questioned over a rape complaint made by award-winning Game of Thrones actress Souad Faress. The accusation itself was ridiculous. Pearson passed by Faress in Waterloo Station in London. Afterward, Faress accused him of reaching up under her skirt and into her undergarments, and  penetratively sexually assaulting her for two or three seconds. She claimed to have staggered and yelled, and that people stopped all around her. On behalf of the actress, Mr. Pearson was plunged into what he described as “a year-long “Kafkaesque nightmare” of being arrested, investigated, publicly humiliated and subjected to a trial.

To secure a conviction, the state slowed down CCTV footage of their brief encounter in an attempt to make it look like there had been more time for the assault to have occurred, and Mr. Pearson’s attorneys had to fight to get it played correctly for the jury. Even slowed, the footage did not show any contact, nor any reaction by passers-by.

To secure a conviction, the state slowed down CCTV footage of their brief encounter

Viewed at the speed at which it was recorded, the footage clearly demonstrated that the assault was physically impossible. There was less than a second of time when the two were even close enough to touch. Mark Pearson was carrying items in both hands, and the positions of his hands didn’t change from frame to frame at all.

The jury in his case took 90 minutes to return a verdict of Not Guilty.

Under s 5(2) of the Criminal Law Act 1967 (CLA 1967), (Wasting Police Time) it is an offence to cause a wasteful employment of the police by knowingly making a false report – either orally or in writing – to the police or anyone else that:

The site also describes another crime that is relevant to this case:

Perverting the course of justice

If a false report you made has particularly serious consequences, the police could charge you with perverting the course of justice instead, which carries a maximum penalty of life imprisonment. Police are more likely to charge you with this more serious offence, rather than wasting police time if:

Mark Pearson is not a criminal. He did not, by any definition, commit a crime, and yet he has been arrested, interrogated by police, jailed, brought before a judge, and publicly slandered as a criminal.

His accuser, however, did. In filing her impossible complaint with police, she wasted police time and perverted the course of justice. Equivalent crimes in the U.S. would be filing a false charge and committing perjury.

Souad Faress is not a victim. She isn’t even just a witness in a court case. She is a criminal… a perpetrator of Wasting Police Time, and Perverting the Course of Justice. She has not been assaulted, assailed, harassed, or even mildly inconvenienced against her will in this case. She wielded the justice system as a weapon of torture against another human being for a year.

And she got away with it. Not only did she get away with it, she was accommodated. She received victim’s assistance, including financial aid. At her behest, police rounded up and questioned a complete stranger, jailed him, extorted money from him, publicly humiliated him, and put him on trial. She was able to do this all anonymously – so much so that even in court, where the jury should be able to evaluate witness behavior to weed out lying, she was hidden from view when testifying.

No charge will be filed against her for her criminal acts. Her victim has no legal recourse to seek justice for what she did to him. He cannot even file a criminal complaint.

Her anonymity is still protected. While other crime victims are encouraged to publicly name their perpetrators, Mark Pearson isn’t even allowed to privately tell friends or family who victimized him.

That is the law in the UK; All of the mechanisms of the criminal justice system are reversed when a woman commits the crime of filling a false police report of sexual assault, sticking to the false story even when there are ample opportunities to retract… and then participates in the process as if her lie were true when the accused is charged, remanded in custody, and tried for a crime based on that lie, suffering worldwide damage to his reputation and mental torture in the process.

I could jump up and down outside on my back patio shouting about it, naming her over and over like that character being stoned to death for Taking the Lord’s Name in Vain in Monty Python and the Holy Grail, and aside from odd looks from my neighbors and maybe a potential noise complaint, I’d face no repercussions.

I would not expect UK police forces to show up on my doorstep to put a stop to my perpetrator-naming antics. Nor should I, as the United States declared independence from Britain generations ago. UK law doesn’t apply here, right?

Apparently Twitter thinks it does. The site spent the last week suspending accounts over tweets, some a year or more old, naming Mark Pearson’s perpetrator.

I first noticed it when my account was suspended. The tweets didn’t even all get flagged on the same day. 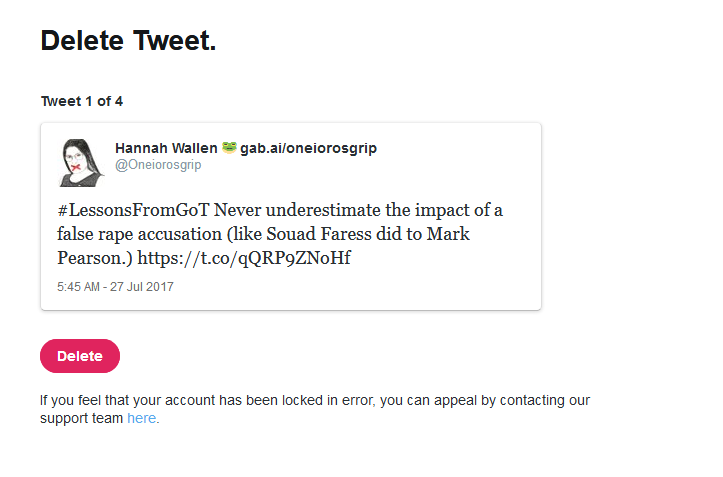 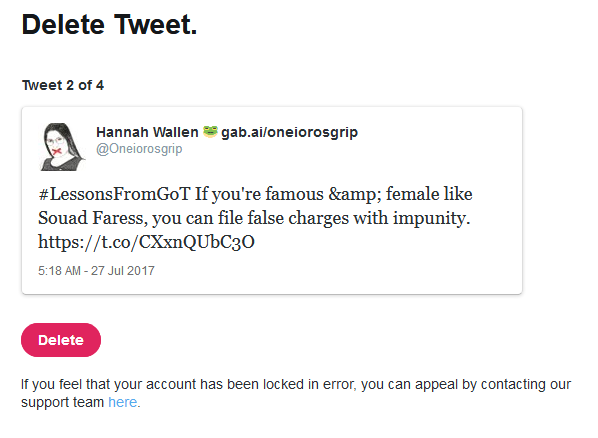 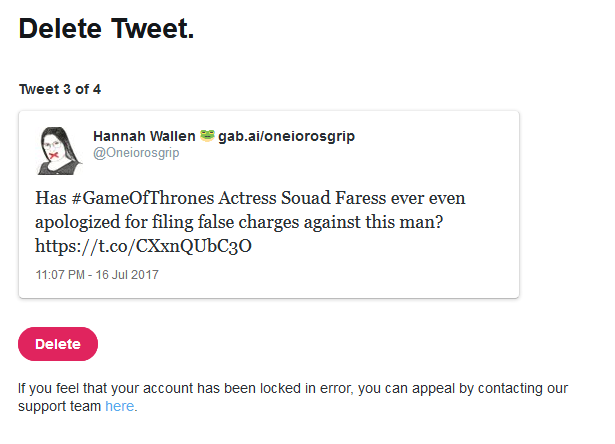 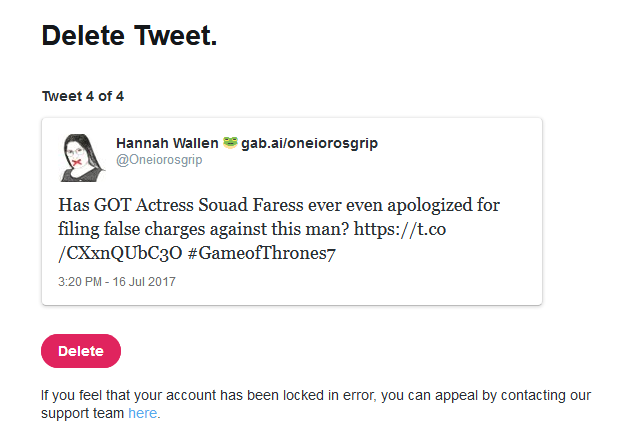 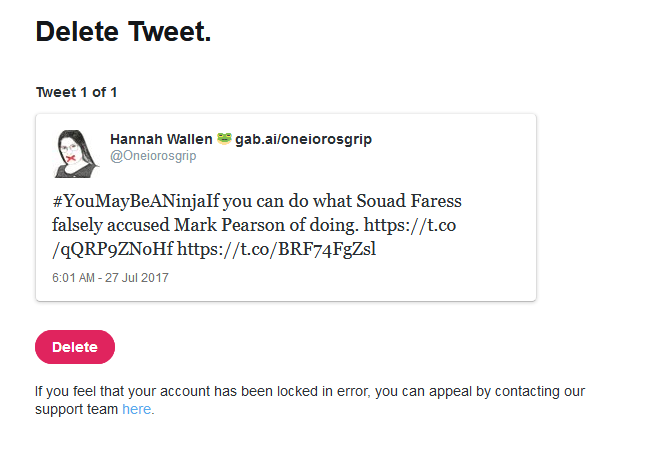 I asked around and found that others have experienced the same thing: 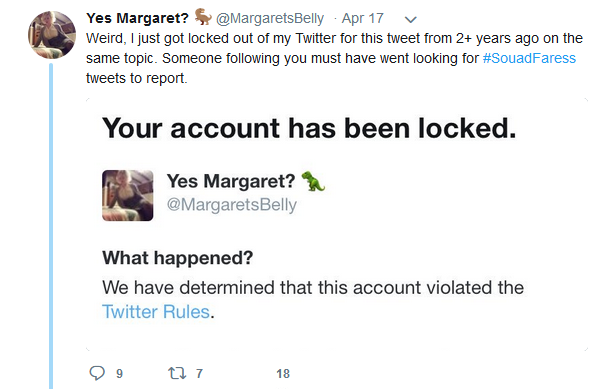 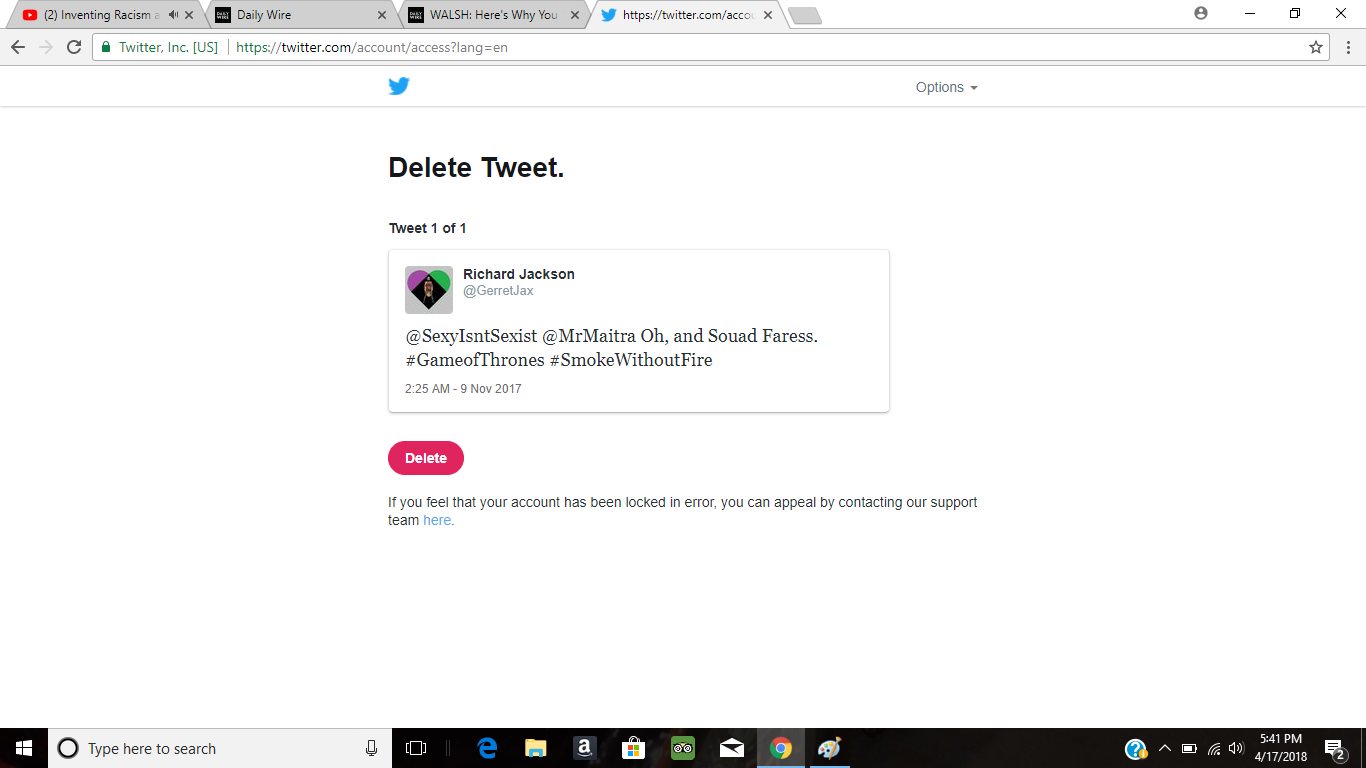 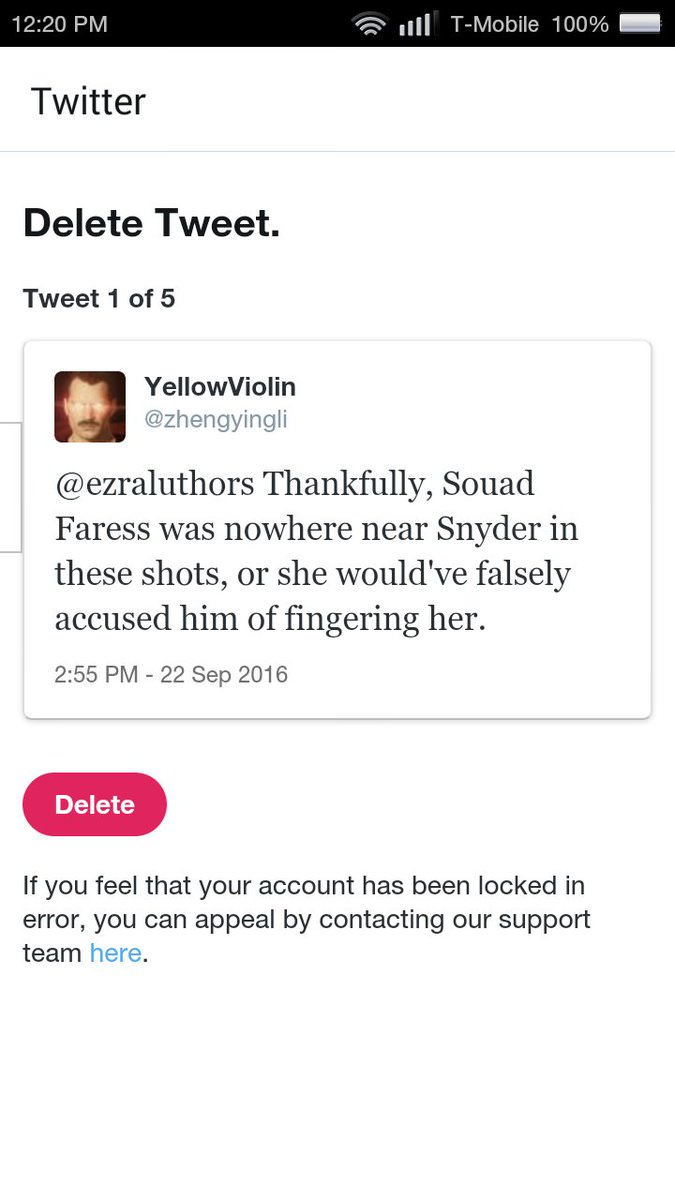 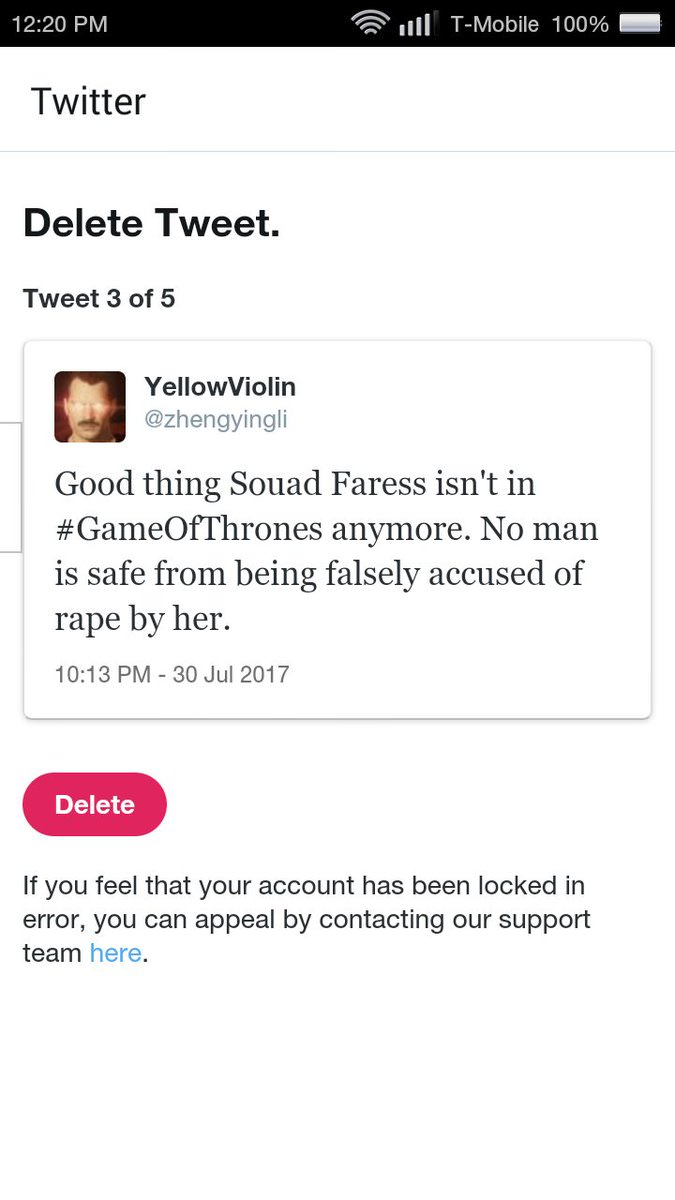 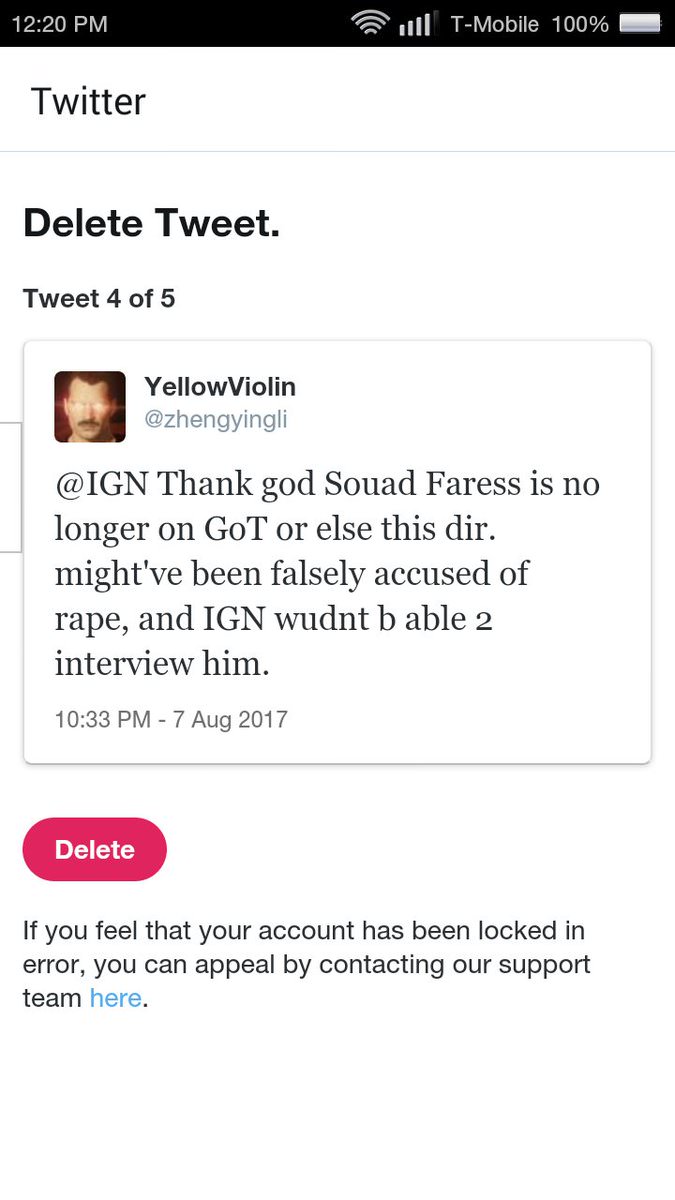 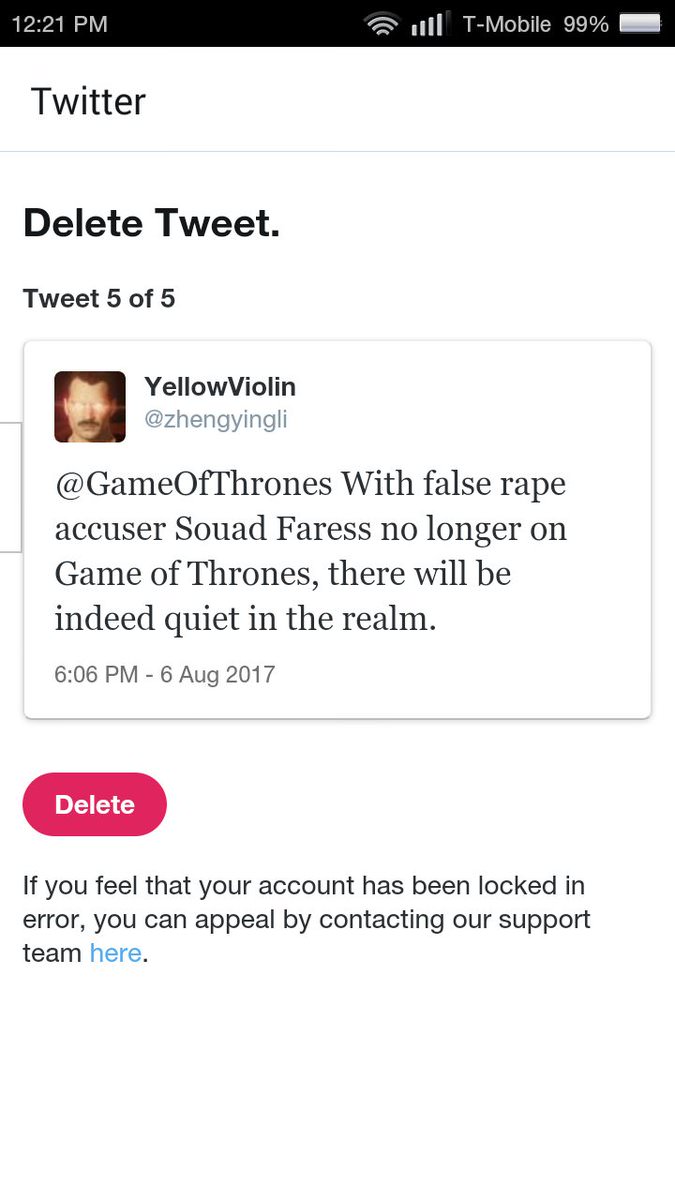 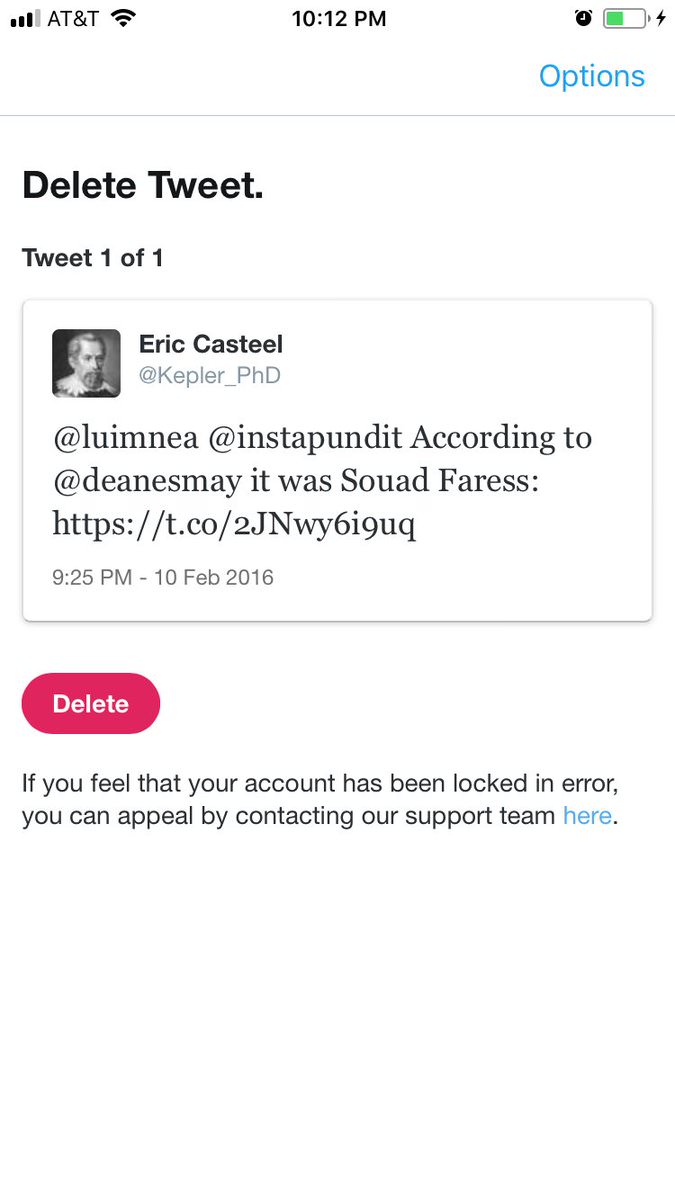 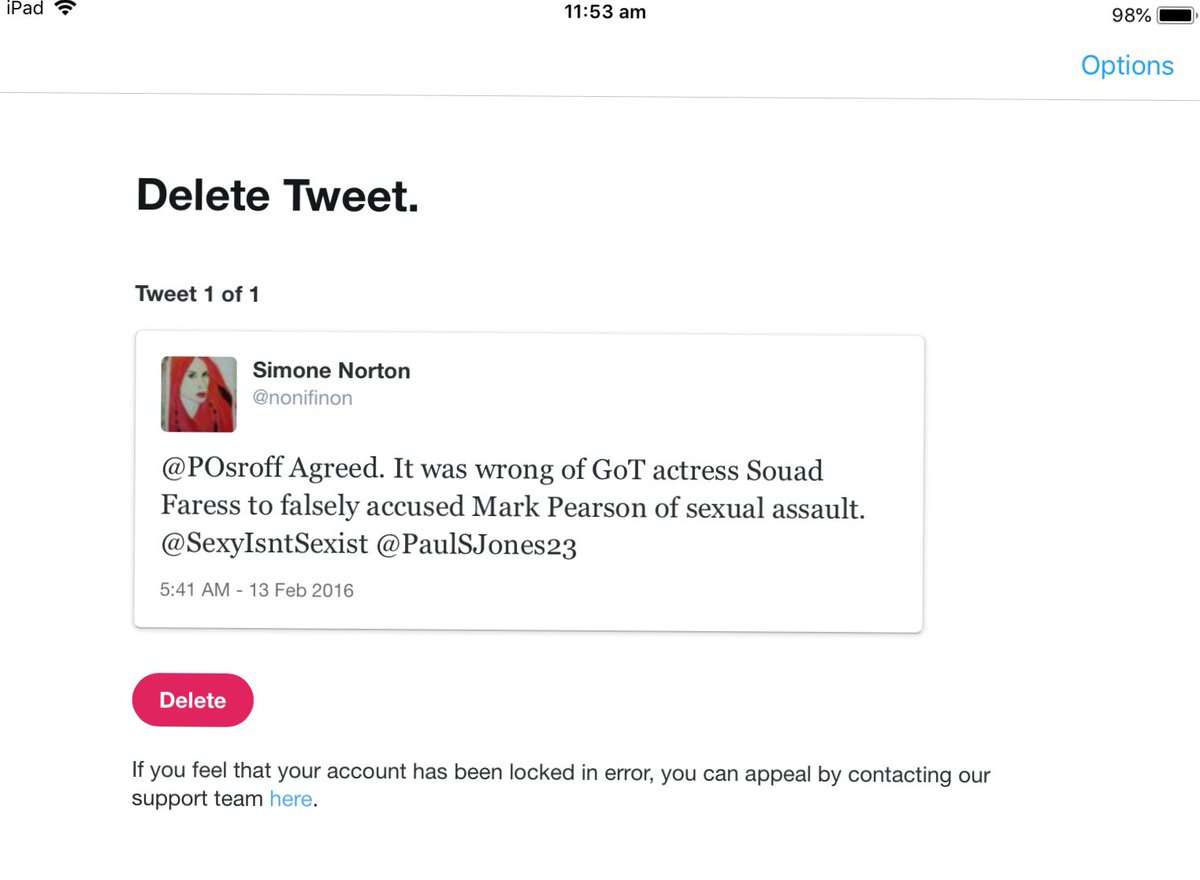 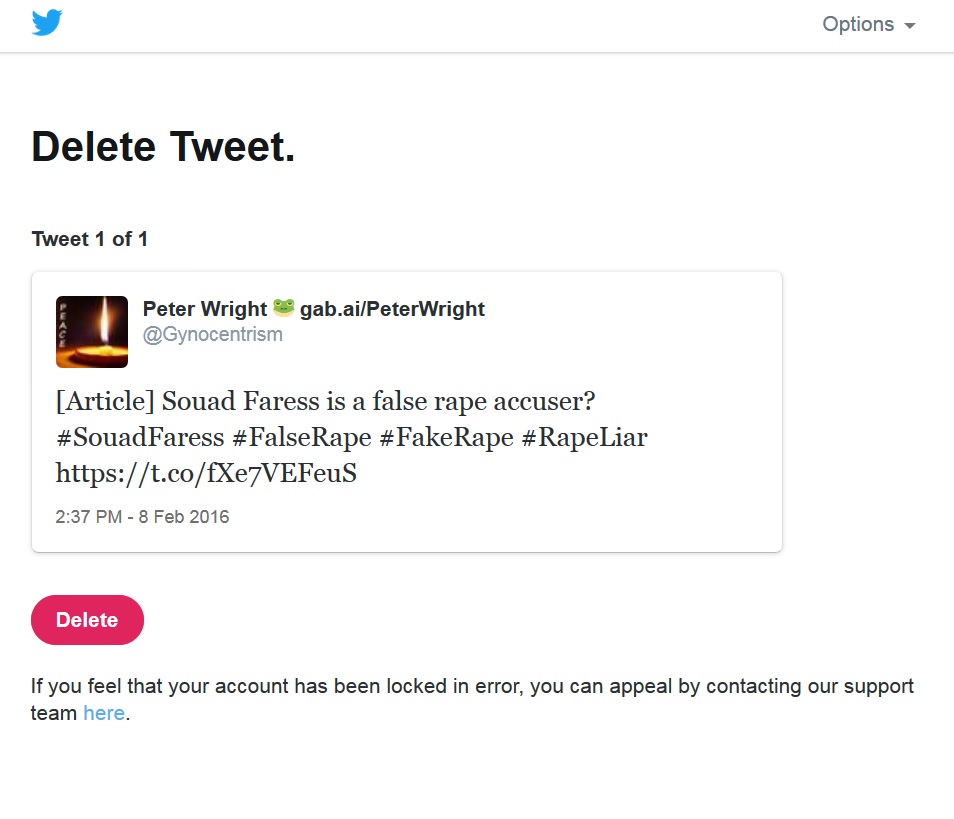 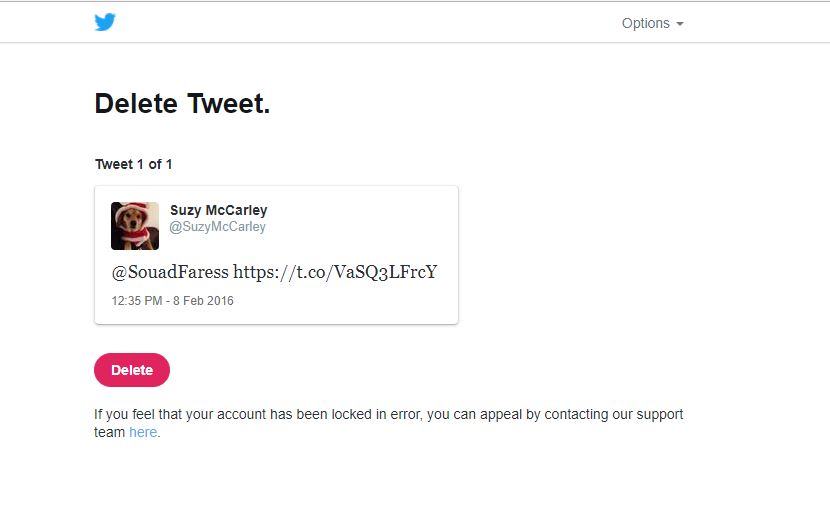 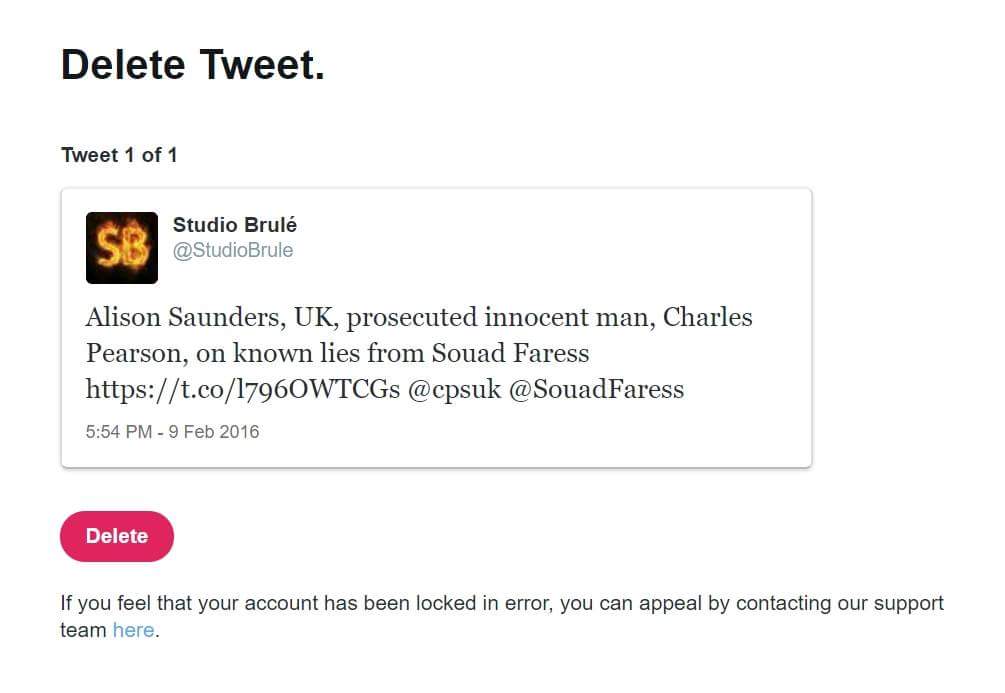 UK law does not apply outside the UK. Twitter is not a UK company. It’s an American company with its main headquarters in the U.S. It should not be applying UK law to citizens from other countries, especially those which, like the U.S., fought a war for independence from the England… but in the name of feminism’s “believe the woman” narrative, that is exactly what is happening. An American company, in apparent deference to UK law, is silencing the speech of American citizens and people in other nations not under the UK’s authority, all for having the audacity to discuss the reprehensible behavior of a criminal.

If social media moguls wonder why they’re the target of so much public criticism, why they’re in the hot seat before the U.S. congress, why regulation of their business is under consideration, here’s a clue:

Governments do not like competition. Social media platforms presuming to apply any nation’s laws but those of their own to the speech of citizens in foreign countries are likely to draw the ire of those countries’ leaders, as well as their own.

The revolutionary war was triggered by citizen ire over government imposition of laws on the American colonies without any representation of the colonists in the decision-making process. Citizens here aren’t disposed toward tolerating the imposition of UK law on our speech.

It’s not surprising that Twitter’s administrators cannot figure out that it’s wrong to protect from criticism a criminal who spent a year exploiting loopholes in the UK legal system to torture another human being. After all, the perpetrator’s actions were in line with their publicly displayed political outlook. Their inability to distinguish themselves from a one-world government entity, however, is rather eye-opening. It’s almost as if, like Facebook’s Mark Zuckerberg, they’re actively angling for government regulation of social media. 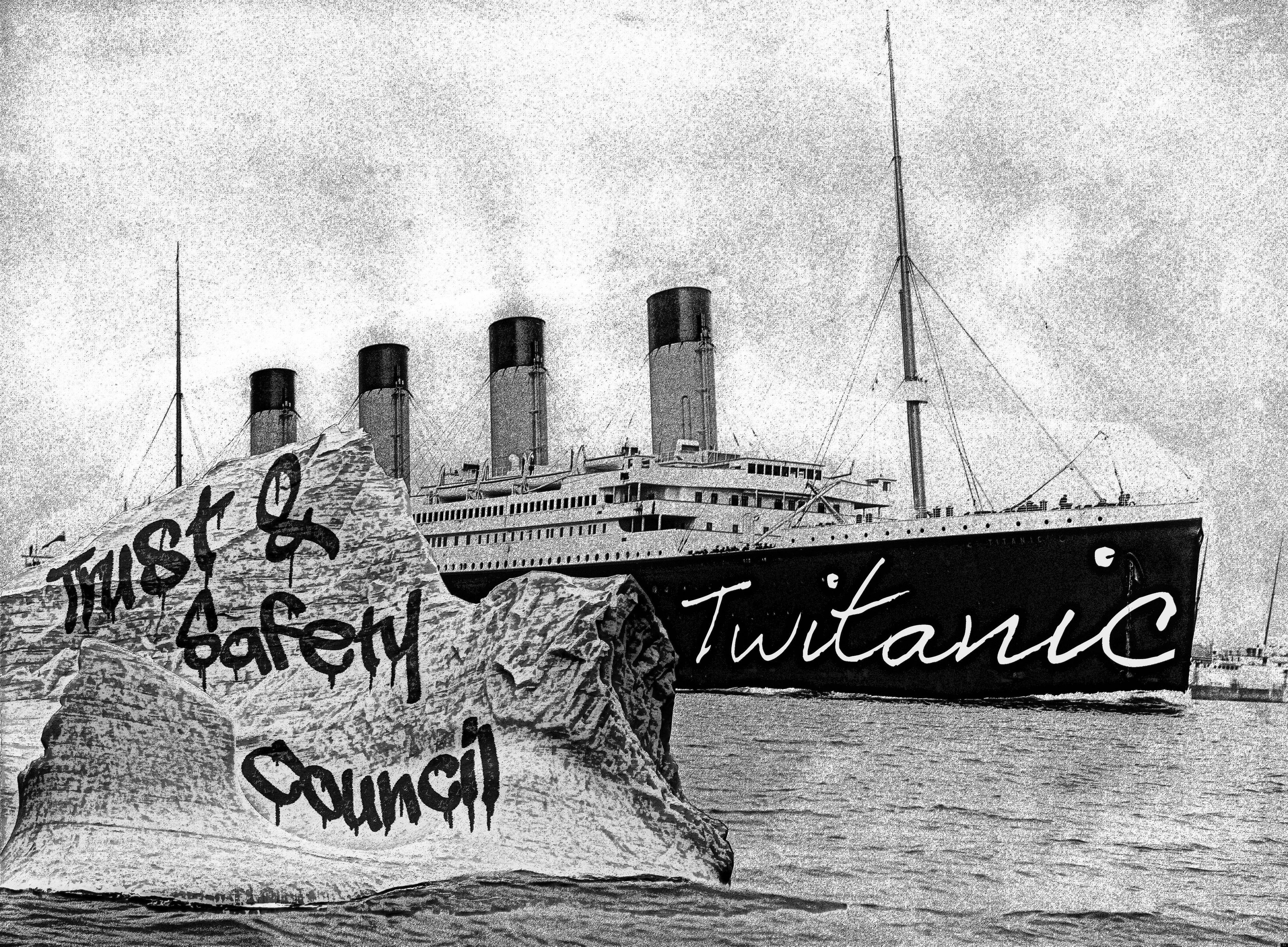