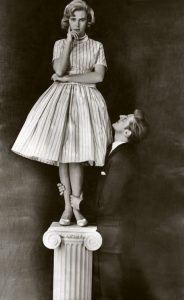 There’s been a lot of discussion lately on a return to traditional gender roles as a way to reverse the ill effects of feminism. We see it promoted by advocates for traditional gynocentrism, and by those who promote non-gynocentric forms of traditionalism, in which men and women are called to adhere to strict ‘gender roles’ – eg. he is head of household who goes out and earns the money and protects her, while she makes babies, apple pies, and keeps the house clean. Its what many people refer to as the ‘two-spheres doctrine’ in which men and women are apportioned sovereignty over different realms – he over the political and social realm, and she over the domestic realm. This, argue the advocates of traditional gender roles, creates a delicate but eminently workable balance that has stood the test of time.

The fantasy of a return to the ‘good old days’ when men were masculine and chivalrous, and women were feminine and ladylike, has run strong through the manosphere and beyond, whether promoted by Anthony “Dream” Johnson and his traditionalism-promoting convention, or women like Suzanne Venker who specialize in promoting traditional roles for women.

I note Mike Buchanan of J4MB recently posted a link on his blog titled Tradwives – women who are bucking feminism, which leads to an article with the byline ‘Submitting to my husband like it’s 1959′: Why I became a #TradWife:

And inevitably, it has become a ‘thing’ for a woman to actually admit that she wants a role as full-time housewife and mother. It’s being called a Tradwife, short for traditional wife, though it was only ever a short-lived tradition for most people… Search the hashtag ‘#tradwife’ on social media and you’ll see images of cooked dinners and freshly-baked cakes with captions like, “A woman’s place is in the home” or “Trying to be a man is a waste of a woman”.

There is a lot to that last statement, just as it is a waste of a man trying to be a woman. As Sweden has discovered, the more you try making men and women the same, the more they will emphasise their differences.1

I have also witnessed an occasional media article showcasing a woman who has decided to quit a stressful job to live like a 1950s housewife, insisting she’s happy to spend her day cooking and cleaning because ‘men should be spoiled by their wives.’

One such story in the UK Daily Mail describes a 30 yr old Oregon woman Katrina Holte as follows;

A woman who was stressed out by her job in a busy payroll department, decided to quit the rat race and also turn back time – deciding to live like a 1950s housewife.

Spinning vinyl discs by stars of the era like Doris Day, she flits about her business, making sure dinner is on the table when Lars gets in, saying: ‘I feel like I’m living how I always wanted to. It’s my dream life and my husband shares my vision.

‘It is a lot of work. I do tons of dishes, laundry and ironing, but I love it and it’s helping to take care of my husband and that makes me really happy.2

For most working men its a no-brainer that she would be more happy in a traditional roleplay of that kind. It is, as she points out, much better than working a stressful job as required of men’s traditional role.

Whatever the trend for women to become tradwives, it is not the only alternative to feminist prescriptions, and it may not be the ‘best’ of the available alternatives either.

Here I’d like to introduce the phenomenon of “modwives” – women who have embraced multi-option lives over trad roles, and who allow, nay encourage multi-option lives for their husbands. Of course I just made up the term modwife, but they exist and are possibly also growing in number.  Both tradwife and modwife eschew feminism which is geared only to female privilege, and not to partnerships based on reciprocal labor and devotion.

I would say not a snowfalke’s chance in Hell. And to invite them to do so today can be construed as coercive and even an abusive act. I submit that few women today are going to genuinely trade in multi-option lives for traditional roles, other than a limited few who like the idea of free time and cosplay, and who can rely on husbands to bring home a healthy wage.

This unlikelihood that women will embrace roles of yesteryear with any real commitment leads to another option mentioned above – the modwife. At best, today’s multi-option women can invite their men to do same. The modwife’s modus operandi is based on personal liberty within relationships, extending a true freedom of opportunity to her partner such as society has championed for her, even though it goes without saying that the loaded gun remains in her draw, same as it sits in the draw of the tradwife.

Yet few multi-option women today are willing to extend that multi-option liberty to men, preferring instead to pocket the advantages extended by women’s ‘liberation’ while expecting their boyfriends and husbands to remain in the mismatched role of protector and provider. There are women however, limited in number as they are, who lean toward the model of commensurate liberty for both men and women in relationships — some of them you will recognize among the supporters of the men’s rights movement.

That libetarian spirit is usually understood as belonging to the political sphere, but it is accepted by the modwife as a guiding principle in her relationship with men. It emphasizes individual choice, relative autonomy, voluntary association, individual judgement, free will, self-determination, and free labor-sharing arrangements and agreements. In a word; freedom.

Applying the concept of freedom to relationships may seem odd, especially when we consider the entrapment traditionally associated with marriage, not to mention the dangers and the restrictions on freedom that come with strict, prescribed gender roles of yesteryear.

Psychologist James Hillman speaks to the topic of freedom in his paper Marriage, Intimacy, Freedom:

Yet what does the soul want with that word Freedom which sets off such expectations? What sort of preposition accompanies and influences Freedom? Freedom from – from fear, want, and oppression, such as enunciated by the Charter that established that established the United Nations after World War Two?  Or is it Freedom of – choice, opportunity and movement, or access to today’s political language?

Or, is it Freedom to – to do as I like, to hire whom I want, to tell the boss to shove it, to go where I want, to marry whom I please–freedom of agency in the empowered and recovered adult of therapy?

Or, fourth, is it possibly Freedom in? This seems moronic or oxymoronic, for the fantasy of American, epitomized by Texan, freedom is “Don’t fence me in.” “In” means within limits or constraints of any place, time, situation, condition, such as the kitchen, in an hour, in a conversation, in a marriage.

This forth preposition,”in,” rather than freedom of, to and from, suggests that the joyful expectation arising from the soul when the bell of freedom rings is nothing other than living fully in the actuality of this or that situation, as it is, which gives to that situation wings, freeing it from a desire to be elsewhere, to escape from it, to want more, thereby sating the soul’s desire with the fullness of the present. How do I say it  “I love what I’m doing… I’m fully in it.” “I’m really into tex-mex cooking; my new computer; re-painting the house.”3

Freedom ‘in’ as Hillman puts it, allows for creative negotiation on how to set up relationships that bypass the narrow choice-dichotomy between traditional relationships and feminist-informed ones.* For example, a man wishes to cook the food or be a stay-at-home father? So be it. She wants a career? Done. A bit of role sharing with him and her — both taking on part-time childcare, cooking and wage earning? Consider it done. This is the kind of freedom that comes with the multi-option couple, and it stands as a viable alternative to the traditional roles that we so often look back to with nostalgia.

The message of the men’s rights movement has been consistent in its commitment to more options for men and boys. That call for more options, for more rights and privileges, turns out to be a good match for the liberties most women enjoy today. Whether we use that freedom to choose life with a tradwife or a modwife – or to reject wives and relationships with women completely – the choice is ultimately ours.

*Note: The terms Tradwife and Modwife – and by extension Tradhusband and Modhusband are used in a lighthearted way to designate the different ways people can set up a relationship. Following on from that its probably relevant to give a name to the third area which is dominated by feminist thinking – the one that insists the woman or wife should set the tempo of all relationship matters and the man should simply fall into line instead of mansplaining etc. these can be called the Gynowife & Gynohusband who has no will of his own. By contrast, Tradhusbands and Modhusbands don’t need to defer to wives on all matters – they have some agency. Agency – options for and during the relationship, is the central point. 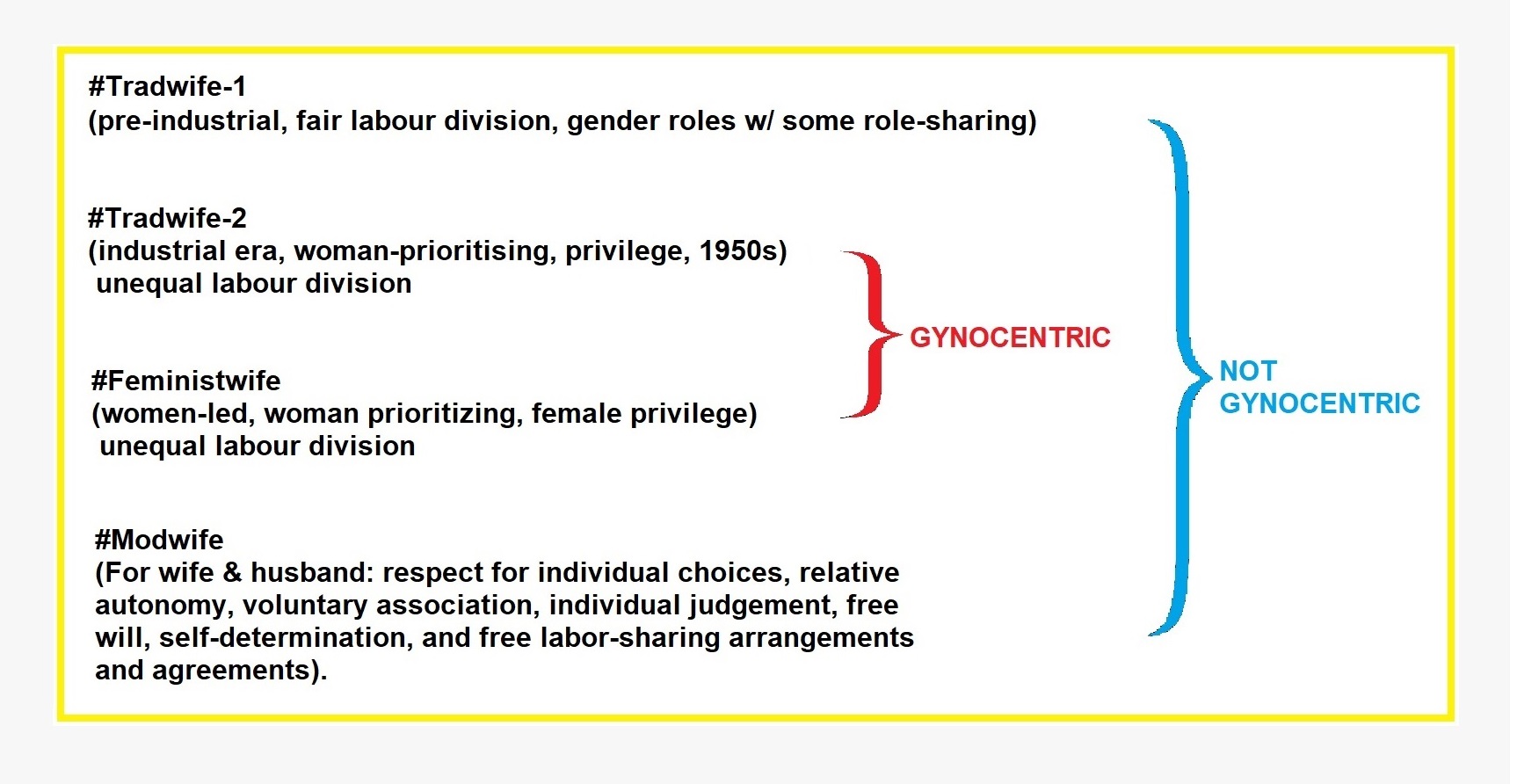