There’s a new college rape survey with some very disturbing findings. The findings are disturbing not for the reasons the sexual grievance industry thinks, but because the answers shine a light on very troubling views held by college women — about men accused of sexual assault, and men wrongly accused of sexual assault. The survey underscores that that our daughters especially, but also our sons, are in need of much remedial education about concepts that are basic to our jurisprudence. Read on, but not with an empty stomach.

Rape laws and policies are shaped by surveys where every rape allegation is uncritically accepted and none are tested against competing claims of innocence. The impact of these surveys on public policy is significant, even draconian. They are uncritically accepted to make laws that diminish the due process rights of young men accused of sexual assault in American colleges, and that is unjust. The only legitimate way to test for the prevalence of rape on campus would be to take a representative sampling of rape accusations and carefully examine the evidence (including interviewing the accused and all pertinent witnesses) as to each claim in a painstaking, objective manner. Every time rape claims are subjected to scrutiny against competing evidence of innocence, most are either deemed unfounded or false. Why on earth is every assertion in a rape survey accepted as true?

The Washington Post and the Kaiser Family Foundation have conducted a survey that, once again, uncritically accepts every characterization of sexual wrongdoing. The survey supposedly shows around 20 percent of college women are sexually assaulted. In fact, the survey is alarming on a host of levels, but not for the reasons the sexual grievance lobby insists. Here are some excerpts–and my comments:

First, college students — women more than men — are prone to rush to judgment and assume guilt based on an accusation:

Second, perhaps the most disturbing question of all shows that college students (especially college women) are woefully unschooled in the concept of Blackstone’s formulation, that it is “better that ten guilty persons escape than that one innocent suffer.” This concept is imprinted on the DNA of our jurisprudence. We’ve written extensively about this concept (see here) and won’t repeat ourselves here. Yet, in this survey, a whopping percentage of women think it’s better that innocent young men be punished for offenses they didn’t commit than to allow a guilty man to go free. Little wonder, given that the sexual grievance industry has dominated the public discourse on these issues for so long:

Third, there is a disturbing absence of understanding about what constitutes “consent.” As but one example, a dizzying 44 percent of women polled didn’t think nodding in agreement constitutes consent. This lack of understanding likely skewed the results of the survey, perhaps significantly: 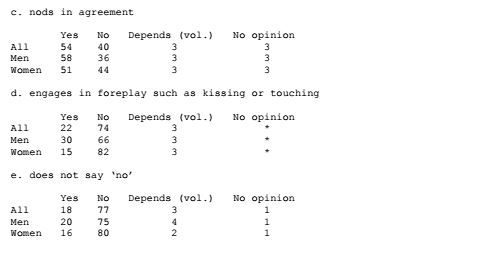 Fourth, despite the responses of the women surveyed in question 35(e) — where the vast majority don’t think an absence of “no” is enough to show consent — in the following response, more women prefer the “no means no” standard over “yes means yes” as the “better” standard to show whether an encounter was consensual. The absence of  a “no” under the “no means no” standard would show consent. So which is it, ladies? Given the confusion among respondents, we must seriously question the trustworthiness of this survey:

Sixth, the following query asks about “unwanted” sex — a subjective standard that has nothing to do with the legal standard of sexual assault since women can outwardly manifest consent while secretly not wanting to engage in the act. The question asks about times when respondents “were unable to provide consent because you were passed out, drugged, or drunk, incapacitated, or asleep.” The wording of this question dooms to the survey’s usefulness. A reasonable person taking this survey would not assume “drunk” sex is the same as “incapacitated” sex (because the survey uses both words, so it’s not reasonable to assume one word is surplusage or that they mean the same thing). By any measure, “drunk”sex is not sexual assault, yet we know that a staggering percentage of sex occurs after imbibing alcohol: 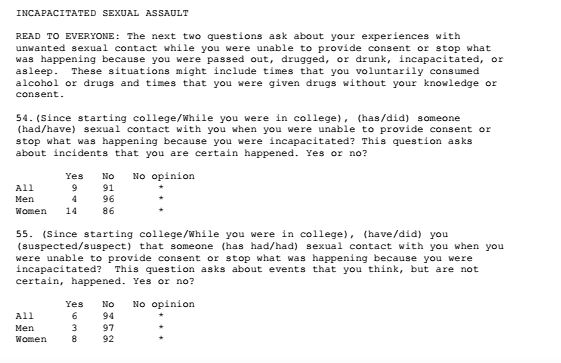 Seventh, sexual coercion (sex obtained by making promises such as inviting you to a party) is apparently considered sexual assault (which is absurd):

The survey is eye-opening because of the percentage of young women who think its better to sacrifice their wrongly accused brothers than to let a rapist stay enrolled in college. This reflects a disturbing undercurrent we’ve been writing about for many years — that the wrongly accused are treated as collateral damage in the “more important” war on rape. (Of course, merely expelling a rapist isn’t going to stop him from raping college or other women, often in the same off-campus place where he raped while he was a student. The sexual grievance industry doesn’t seem very worried about that.)

Put all that aside, the survey is making headlines for reinforcing the 1-in-5 canard. As shown above, the survey is not reliable because of the way the questions are worded. Beyond that, even if the questions were worded properly, it would still be problematic. A recent scientific study shows that some women lie on surveys to minimize their consensual sexual encounters, likely because of societal double-standards that find it acceptable for men, but not women, to engage in sexual activity. These lies are designed to bring women in sync with their expected gender role, and it is the same reason many women lie about rape–to defend their femininity. Should we not expect, then, that some women report in surveys that they’ve been subjected tounwanted sex even when, in fact, the sex was consensual in order to be in sync with societal expectations about gender roles? The Washington Post survey doesn’t take that into account.

Why is it assumed that sexual assault surveys are the moral equivalent of truth serum where women are incapable of telling anything but the one, objective truth? Why is every untested assertion of sexual assault assumed to be true based solely on the “victim’s” side of the story?  The fact is, people exaggerate, lie, and claim their behavior is better than it really is in all sorts of surveys and other public pronouncements–not just sex surveys. People exaggerate the hours they work; how often they go to church; their height and their weight; and their altruism during emergencies. White voters lie in surveys about their willingness to vote for a black political candidate. Heck, people even lie about the reason they buy a new computer. Nearly one in four women admitted to exaggerating or lying in social media about key aspects of their lives between one and three times per month.

It is well to note that surveys also show that almost 30 percent of women claim to have seen a ghost. Should we conclude there’s an epidemic of ghostly encounters afflicting college women? Or would we require some greater proof before reaching that conclusion?

This is a serious question, with serious implications. The issue we raise isn’t some abstraction, and we do not write this to engage in some sort of “Oppression Olympics.” The fact is, sexual assault surveys are routinely used to justify the policy of diminishing the due process rights of male students accused of sexual assault. There are legitimate reasons for doubting the reliability of these surveys, and these concerns should not be dismissed as rape apology, misogyny, or slut shaming. Nor should we be demonized for merely raising the issue. This is an issue that ought to be seriously, and respectfully, discussed.