Yesterday, the Southern Poverty Law Center posted an article on the “anti-woman” section of their website targeting, of all people, Johnathan Taylor from A Voice for Male Students. In it, writer Arthur Goldwag states:

“The alleged spread of this anti-male “rape culture” on college campuses is getting new attention from the political right. The most dramatic example of that may be the website A Voice for Male Students, founded by “men’s rights activist” (MRA) Jonathan Taylor. To Taylor, American colleges are key battlegrounds in the all-out war that feminism has allegedly been waging against boys and men since the mid-1970s — a war that Taylor says they appear to be winning.”

Taylor, who has never identified himself as amember the “political right” or any other political affiliation, has established himself as the Men’s Human Rights Movement’s go-to guy for discrimination against males in education.

Having made excellent videos for years concerning the matter, he established his website last year as a warehouse of information concerning misandry and discrimination against men and boys in all levels of education. He is regarded by many as being unmatched in expertise in this area and is also regarded as being the most eloquent advocate for male students everywhere.

“A Voice for Male Students’ Taylor doesn’t do his cause any favors with his strident, relentlessly accusatory rhetoric,” says Goldwag. “His over-reliance on cherry-picked anecdotes and out-of-context quotations, or his monomania about hegemonic feminism.”

Taylor’s “anecdotes” are hardly “cherry picked,” as Goldwag contends. His assertion that male students are in the minority and are quickly becoming a rarity in higher education is well documented not just by Taylor, but also by the National Center for Education Statistics. 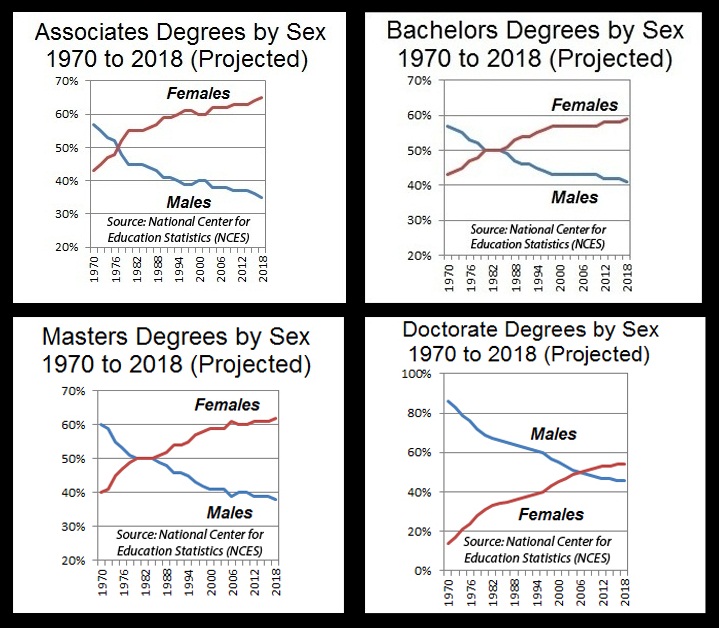 Source: A Voice for Male Students from the National Center for Education Statistics

In the spring of 2012, the SPLC published in its Intelligence Report a list of several “anti-women” websites. Included were A Voice for Men, SAVE Services, Men’s Rights Reddit and the False Rape Society.

The SPLC has since backpedaled from calling out these organizations as all-out “hate sites.” In a subsequent article dated May 2012, Goldwag stated: “It should be mentioned that the SPLC did not label MRAs as members of a hate movement; nor did our article claim that the grievances they air on their websites – false rape accusations, ruinous divorce settlements and the like – are all without merit.”

Yet in his latest article Goldwag re-characterizes these same websites in derogatory terms when he asserts: “A Voice for Male Students, which appears to take its name from the much more virulent MRA site known as A Voice for Men, does not qualify as a so-called ‘hate site.'”

“It’s not like Goldwag was talking about AVFMS on a blog called ‘Generally Good-Faith Groups Advocating Social Justice.’ He included it in a blog called “Hatewatch” and categorized the article discussing my website under the blog section “Anti-Woman,” said Taylor in an email response to AVFM News.

“He also misrepresents AVFMS as being dramatically far-right (AVFMS has always been non-partisan) and accuses it of over-reliance on misquotations, statements for which he provides no evidence.”

“If organizations like the SPLC were committed to monitoring all types of institutionalized hatred regardless of which sex it is directed at, websites like A Voice for Male Students would not need to exist. But currently we have a pervasive problem regarding anti-male bias in academia that has remained unaddressed from a pro-equality, pro-human rights perspective for too long. AVFMS exists to help fill that void,” he added.

A Voice for Male Students and AVFM are currently partners with the National Coalition of Men in starting men’s issues groups across the U.S modeled on the Canadian Association for Equality’s similar groups in Canada.