If you have not seen the debate yet, you really should watch it now.

Brian, upset about the public reaction to his abysmal performance in which he tried to assassinate Sage’s character, went straight to the cops.

There is no record of a pending restraining order because Sage is not guilty of anything except expressing concerns over the neutrality of the debate. AU’s VP would even attest to that. 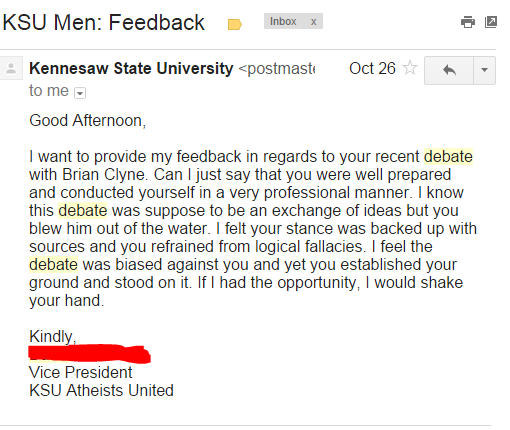 Brian cited only Issac T. Quill as the primary source of his upset.

Brian tried to ban Sage from AU over Issac’s comment with permission from the Kennesaw State University (KSU) Student Life Department. Brian’s expectations of Sage’s responsibilities are as petty as you’d expect.

Our own David King explained that Brian did not follow protocol for filing a grievance with the moderation team and confirmed that comments on AVfM are not Sage’s responsibility.

Let’s fast-forward to November 21, when AU brought Dr. Richard Dawkins to campus. In the opening speeches by professors, Brian was given credit for most of the work behind the event. Based on the information available to me, Dawkins admitted to never hearing of the MHRM after endorsing feminism in a Q&A. The footage should be published by AU in due time if you wish to hear this for yourself.

Brian barked orders at Sage to sit with other AU members and interrupted Sage’s speaking to Dawkins during a book signing. Sage was telling Dawkins about the debate so that Dawkins could learn more about the MHRM (assuming Dawkins cared enough to watch). Sage put himself at the back of the line, so he had no one to hold up except Dawkins. But even then, Sage was not allowed to speak for more than a few seconds.

Since Brian had broken the no-contact, Sage responded. 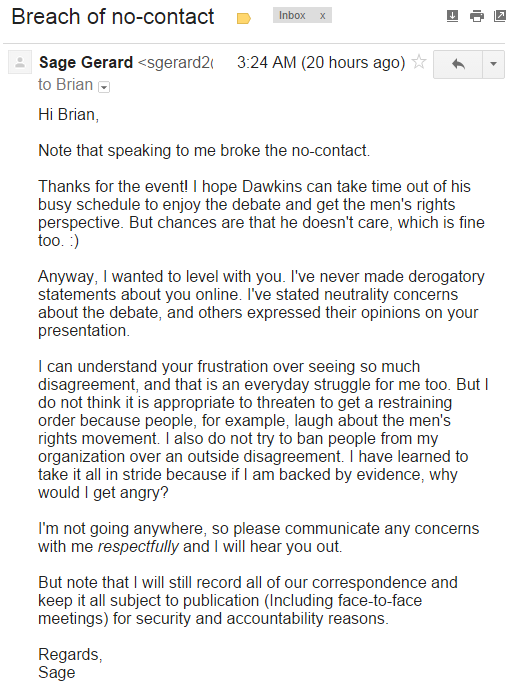 Brian, being open to discussion, wrote the following: 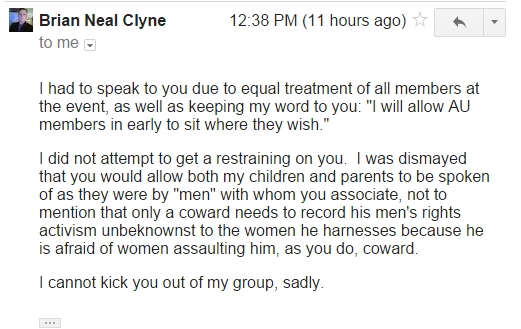 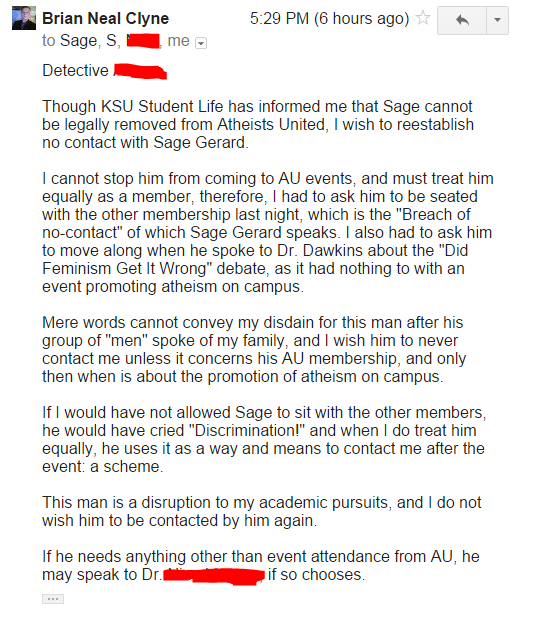 Sage has never harassed anyone, Brian did not “ask” Sage to move along, and Sage was never made aware of any prescribed rules on conversing with Dawkins.

I’m sure Sage will respect the new no-contact. But I can talk to Brian on these pages as much as I want, and believe me, he would have preferred to hear from Sage.

I cannot comment on specific case details, especially the nine(!) “disposed” criminal incidents. I also cannot pass judgment on your current character based solely on chapters of your life that ended over a decade ago. You can read the reports I have on your background here, with sensitive information redacted:

If there are any inaccuracies, comment below as soon as possible to prevent a misunderstanding. But from what I’ve gathered so far, the record is legit. When I look at your present in light of your past, “rehabilitated” is not the first word that comes to mind. Healthy skeptics don’t involve cops with personal vendettas over Internet comments, nor do they commit larceny after turning 18.

You risked putting Sage in physical danger of vigilante action with inflammatory allegations, and you have the audacity to continue the character assassination attempt by bitching about a comment?

The worst part is that after all this asinine bullshit, you remain in a position of leadership with enough money to hire a celebrity and dispose criminal proceedings. Way to show that you don’t need to be decent or sane to make it in life.

By the way, regarding all of those disposed criminal cases, is Daddy rich? I ask because I can’t think of another reason why a 34-year-old man would ever write this about one comment:

Let me get this straight: When someone you never met comments about your family, it’s Sage’s fault, but when you make a veiled threat about your family’s response, you can’t be held responsible?

You and Daddums can both stick it, Brian.

While you pat yourself on the back for associating with Richard Dawkins, Sage continues to endure increasing restrictions on his speech from the KSU Interdisciplinary Studies Department and your personal whim. Making threats doesn’t exactly make you look like the saint you pretended to be at the bottom of this praise piece on AU:

Social justice dogma has been co-opting the secular community, and this situation is no different. You, a feminist who supposedly loves diversity and equality, are prepared to lie and cheat, then milk praise like your very life depended on it.

You and Sage will be in AU meetings together because Sage wants to contribute to secularism on campus. I cannot know what might happen to Sage if you and your brainless groupies see this article, but we cannot allow our culture to reward you while Matt Taylor is reduced to tears and professionally endangered over his shirt.

As a functional skeptic, I remain open to the possibility that you can change. But it will take a lot of convincing for me to change my mind about a (former?) criminal attempting to escalate his personal insecurities to a criminal indictment of an innocent man.

This is not about Brian’s personal beef anymore. Brian is showing his true colors as a leader and an officer with access to state funding through KSU.

With that being said, I’d like to address the students of KSU.

KSU students, if you learn anything from this article, let it be this: Brian will take your name to the cops for petty personal reasons, even if you’ve done nothing wrong. Brian uses people for his own image and will only treat them well or not in relation to that aspect alone. Do not volunteer any time or personal information to Brian without a recorder running. Given both his criminal record and current behavior, Brian is willing to defame and marginalize you on a whim. And he will make sure you shut up while he does it.

Is this the kind of person you want facilitating open discussion and the growth of skepticism on campus?

I urge KSU students to please report any future incidents with Brian Neal Clyne to your Dean of Student Success Dr. Michael Sansivero, the KSU police, or to our editorial staff. You would be doing your campus a service by both holding corrupt officers accountable and preventing bullying.

Brian, if you want to be able to hold down a job again, stop acting like a sociopathic control freak and own up to your mistakes. So you didn’t like how the debate went. Tough. You agreed to go public, and now people are learning the truth about you. Sage did nothing wrong, but you capitalize on political fashion to justify bullying Sage and accusing Sage of things he didn’t do.

KSU secularists deserve better, and I’d bet that the AU Constitution would agree with me if it had a clause for dealing with corrupted officers like a real constitution would.

I admire Richard Dawkins’s contributions to secularism, but he should have better practiced due diligence before working with Brian. Perhaps a few tweets are in order to see what Dr. Dawkins thinks about this situation. I’d also like to ask our readers to share this article on AU’s Facebook and suggest to their members to vote for a more functional president. What could be more relevant to AU business than finding a qualified leader?

There’s my two cents, Brian. Use the cash to buy a better brain. Or better yet, integrity is always free. Your parents and your daughters should be ashamed to know you—and if they really did know you, they would be.

Why I divorced Child Support Services, aka "Friend of the Court"