Brian Clyne of KSU Atheists United (AU) challenged me to a debate on the topic “Did Feminism Get it Wrong?” Clyne initially stipulated that I was responsible for preparations. My response was simply that I, the challenged party, was not liable for debate preparations just because I had accepted the invitation. We agreed on terms, some of which were documented on OwlLife (link is to a PDF snapshot of a public page). However, the terms that were published differ from the terms agreed upon in email conversations, which is a problem.

The debate was advertised as Socratic, although it did not seem to follow any national standards. There was not meant to be a winner or loser in the debate, just competing ideas thrown out into the fray.

Here is the complete, unedited footage that came directly off the SD card of the AU camera.

(NOTE: Due to the camera’s way of recording footage, the audio runs on only the left stereo channel. My apologies to headphone users for that annoyance. Try using the instructions located here and here to force mono output to fix the issue for yourself, since re-uploading takes half a day for me.)

To Clyne’s credit, he defended the choice of Dean of Student Success Dr. Michael Sanseviro as a moderator when a feminist pressured him to hire someone else. In addition, the footage shown above was recorded by an AU member, and it was provided to me by Clyne for publication. My thanks go out for the efforts put forth by AU in preparing this event.

However, there are neutrality concerns and factual errors. Everything I mention below can be observed in the above video and checked against the terms to which I have linked.

The terms emailed between parties stated that we could have a 1-on-1 or 2-on-2 debate. If in the case of a 2-on-2 debate one team member does not show, the remaining team member can opt to debate one person on the other team or both of them at the same time.

(Note: AU calls me “the President of Men’s Rights” in several places and I have no idea why.)

Notice that the terms documented online do not include what was shown in the email, nor was I informed that such information would be omitted. The debate terms were modified due to our negotiations, which is fine, but note that I asked for 1-on-1 when my desired partner would not show, and Clyne agreed and made that known to our moderator. 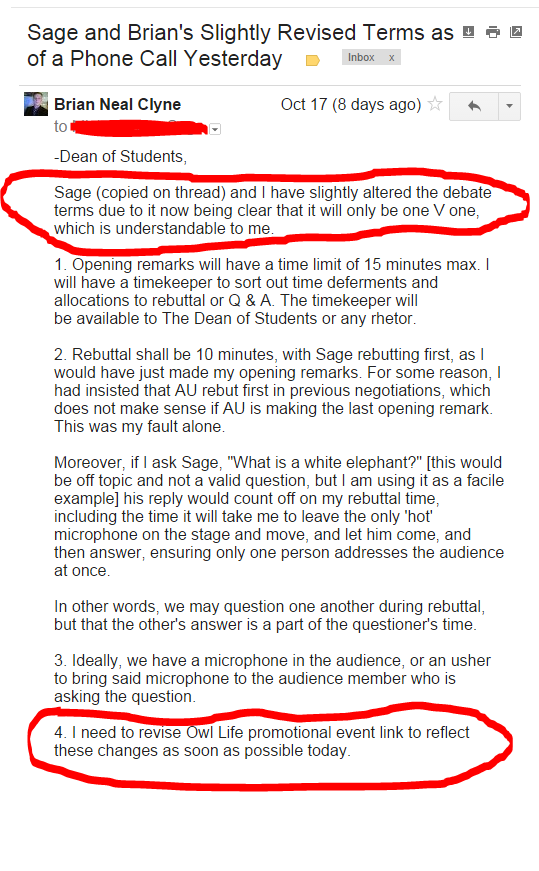 But when I arrived at the venue, Clyne’s partner sat onstage. Clyne cast her as an audience member who was allowed to ask questions during the Q&A, but she still sat on the stage and not among the audience. Every question she had was directed at me, and Clyne claimed that she should be the first to ask questions before any other audience member.

I did not object because what difference would it make? If I questioned her role as an audience member with a conflict of interest because of her pre-existing knowledge of Clyne’s position, then Clyne could just point to the other AU members in the audience and say that since they were entitled to ask questions, she could too.

Clyne said he would do a 1-on-1 but then set up a 2-on-1 that he could call a 1-on-1 when questioned. This could also open an opportunity to paint me as if I have trouble with having a woman onstage. I saw how that would play out, so letting the unfair situation stand seemed to be the prudent option.

There was also equivocation on terms regarding opening statements. When Clyne made his opening statement, notice that it was not just an opening statement. The 15-minute maximum speech included several attempted rebuttals. In debate term negotiations, Clyne repeatedly made mention of “opening statements” in emails, as if to say that he and I would make opening statements about our positions. However, the terms call Clyne’s opener a “Response.” The terms make mention of rebuttals as if to suggest there is equal time and that all rebuttals would be made during the rebuttal period. But that is not how it played out. Without making this explicit to me, Clyne allowed himself up to 25 minutes of rebuttals while I had to live with 10 minutes, based on an ambiguity in language that contradicts the tone of the terms.

I objected when, during rebuttals, Clyne asked leading questions suggesting that I meant to intimidate women on campus and record them without permission. The questions were so loaded that I called “red herring,” and Clyne then insinuated that I was dodging questions.

How is interrogating me onstage about alleged personal misconduct with loaded questions relevant to the topic?

I asked Clyne why he felt a need to reframe the issue.

He (not the timekeeper) told me that I went over my time and that he was not obliged to answer my question.

So, Clyne’s partner was allowed to participate with priority questioning with pre-existing knowledge of Clyne’s position. The time allocation was slanted. Clyne attempted to use loaded questions and a time discrepancy together to facilitate an off-topic character attack.

The moderator, Dr. Sanseviro, never intervened. From what I know of Sanseviro, it did not appear to be because of bias so much as it was not picking up on the manipulation (Sanseviro is actually a really cool guy).

The deck was stacked to make me look like a monster. AU may have done some things right, but that does not excuse manipulative tactics.

KSU Student Media will be covering the debate next week, but I suspect that what I mention here will not make the papers.

The last day to RSVP for Male Students in Peril is Sunday, October 26. If you want to place your feet on campus and speak out against the forces that be, it’s now or never. This is your chance to provide a much deserved “fuck you” to those who prevent honest discourse and to secure your place in history as one of the people freed from feminist tyranny.

People are talking, and KSU is dividing. Men’s Rights Activists are starting to emerge on campus, but they need one last push to be open and proud. That push is meeting more people like you to know that they aren’t alone. RSVP, and be there in the name of free speech, liberty, equity, justice, and honor.

Angry Harry on AVFM, Paul Elam and the demise of feminism