Robert St. Estephe–Gonzo Historian–is dedicated to uncovering the forgotten past of marginalizing men. “Gonzo journalism” is characterized as tending “to favor style over fact to achieve accuracy.” Yet history – especially “social history” – is written by ideologues who distort and bury facts in order to achieve an agenda. “Gonzo” writing is seen as unorthodox and surprising. Yet, in the 21st century subjectivity, distortion and outright lying in non-fiction writing is the norm. Fraud is the new orthodoxy. Consequently, integrity is the new “transgressive.”

Welcome to the disruptive world of facts, the world of Gonzo History.

Paternity fraud is a major issue nowadays. It has been on the increase in recent decades. Paternity fraud is frequently employed in order to defraud money from the targeted non-father. The scam has been around, it should go without saying, for centuries. The story of Scotswoman Jemima Aiton, who plied her industrial scale racket in the early decades of the 20th century,  offers an example of one of history’s greatest practitioners of the art of paternity fraud.

A dour old Scottish magistrate glared angrily down upon pretty, wayward Jemima Aiton a few days ago, signed an ominous looking official document, and said to her: “They tell me they call you the ‘Queen of Hearts’ in the gambling dens of Glasgow. But to me you seem to be the very queen of clever, conscienceless, criminal schemers. Your crime is without precedent. Your plan was diabolical. It is with a clear conscience that I sentence you to prison.”

Jemima Aiton, twenty-three, and the wife of a man she managed to mislay a few years ago, when she found his honest affection beginning to pall, was convicted of stealing a baby boy less than a month old. The amazing young woman took the infant, not to satisfy an overdeveloped mothering instinct, nor because she loved the babe. She stole him to use in her business – just as other adventuresses use compromising photographs and bundles of torrid love letters.

Representing him as her own, she wheedled, blarneyed coaxed, bullied and blackmailed hundreds of pounds out of a score of men who knew her well. For lovers with whom she had been indiscreet (alas, there were several such!), she had one story.

“He’s our bairn, lad,” she would say to such a one. “Yours and mine. He’s the very picture of you. And how in the world I’m going to bring him up, I don’t know.”

If that didn’t do the business, she would burst into tears. But as a rule it wasn’t necessary.

For elderly admirers who had restrained their ardor, and were not in her power she had another story, equally affecting: “Poor laddie,” she would croon, looking at the stolen babe with an all but Madonna-like affection. “His father – my husband – is a drunkard and a wastrel, and I don’t know where he is. And how in the world I’m going to bring the boy up, I don’t know.”

It always got  back to that to a question of how she was going to bring him up. Just how many slightly silly middle-aged men of affairs contributed to the exchequer of the tricky grass widow and her bogus baby the authorities don’t pretend to know.

When the girl stood in the dock for sentencing, there was just one fact in her favor, and that was what prevented her from getting a much longer term, than she did get. It was that she had not abused the child.

Jemima was born in a tiny Scotch hamlet on the manor, not a great way from “Kilmarnock” and Glasgow. Until she was married, she was never in a town of as many as 500 inhabitants. When twelve years old she was put out to service in the household of a prosperous farmer of the neighborhood, who worked her long hours and hard. Between that and her fifteenth year she saw enough hard work to become aware that she didn’t like it and didn’t intend to make her living by it. At fifteen she married Alton, a good-looking, shiftless, younger son of a fairly well-to-do family of the village, and escaped from the servants’ hall.

Since then, Jemima has confessed she married Aiton because he represented her only possible mode of escape from the hamlet, on the moor. The boy was without ambition; and having gotten the girl, he was prepared to settle down at home, but she “kept at him” until he moved away to Kilmarnock with her.

She was satisfied with Kilmarnock for a few months. After her native village, which was just a “wide place in the road,” as an American would say, the larger town seemed a veritable metropolis. Inevitably, however, the day came when she demanded wider horizons, and the flustered and uncomfortable young husband shook himself out of his pleasant lethargy and raised the fare to Glasgow.

Once, there, the sixteen-year-old bride left Aiton in no doubt as to the course she intended to pursue. She ran away from him their first night in the big city, and began to dance her way down that primrose path so many young girls have traveled.

Without any money when she cut herself adrift, from Aiton, she became almost overnight a member of the “gay set” on the fringe of the half world, and a few weeks later a notorious gambler succumbed to the lure of her vivid, restless, disturbing beauty, and set her up in a cottage in the suburbs.

Month followed month and Jemima followed her card sharper – sometimes playing cards herself, sometimes aiding him, sometimes tolling in victims to be fleeced, earning her title of “Queen of Hearts.”

Constancy, though, was not in Jemima’s make-up and in time she tired of her gambling sweetheart, and his occasional periods of poverty. Thrown into association with gay young men of fashion, elderly playboys of social standing and business men sowing belated wild oats, she began to turn the acquaintance to financial advantage.

Once a young Scotch laird was her “protector,” and squandered upon her the pennies and pounds wrung from the miserable tenants on his mountainy estate. Once a canny Glasgow banker set her up in a magnificent establishment, imported servants and furniture for her, gave her a splendid car of her own, and a little checking account. A crown prosecutor was an admirer once; a shipping magnate lavished a small fortune upon her.

Shrewd, with a peasant shrewdness in matters of money, Jemima of the moors lost out, with her various prosperous admirers because of a constitutional inconstancy in her, and because of common tastes which not even the best of clothes and the politest of surroundings could erase. In her heart, the country girl yearned for the tawdry crowds she knew as the card sharper’s sweetheart, and even after she became the favorite of a  succession of wealthy men she could not down her liking for the showy and the vulgar.

The banker heretofore alluded to concluded his liaison with the former servant, maid when he found a dance hall dandy leaving the apartment early one misty morning. The shipping magnate quit in disgust when he found that his wild rose of the moors was stealing from his arms to meet a public house rowdy who had been a prize fighter.

With patrons vanishing, money going, and her beauty somewhat tarnished by the wild night life she had been leading, the canny girl from the country began to take thought of her predicament and to plan a coup that would make her financially independent.

Apparently she decided against further amours with elderly admirers well, stocked with silver, reasoning that such affairs were too boring, and, besides, interfered with her freedom.

Just when the idea of using a baby to further her failing fortunes occurred to her, the police didn’t establish clearly at the time of the Glasgow trial. One witness did say that he proposed marriage to her not knowing that the absent Mr. Aiton was still her legal husband. He painted a glowing picture of the joys of motherhood, which made her laugh, at first, and then made her stop and loot reflective and calculating.

It wasn’t a great while after that at any rate, that she began to scan the little personal advertisements in the Glasgow newspapers, keeping her own counsel while she did so. And one day her eye lighted on the following “agony item”: “Young mother, unmarried, wishes to place infant, son with kindly, respectable people. Child may be legally adopted. Mother is unable to support him.”

The advertisement had been sent in from Kilmarnock, and after some red tape had been unraveled, Jemima Aiton journeyed to that town and met Ellen MacDougall and her small son, Andrew. One of those flighty after-the-war romances had ended tragically for Ellen, with a baby on her hands, and the shiftless roving father in flight to avoid responsibility. The child was only twenty days old, and the young mother, “on her own,” was obliged to go to work. 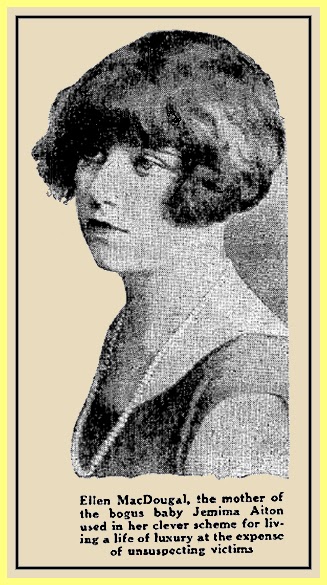 The fair but false Jemima professed the most unrestrained admiration for the baby, and assured the unhappy mother that she would love him and rear him as he should be reared. Also, that, she (Ellen) would be permitted to see him frequently.

With that understanding, they started out to the parish council office of Kilnarnock to make the arrangements for the adoption. Of course the “Queen of Hearts” had no intention of effecting such a step. She had studied the lay of the land; had on the way to the office she gave the real mother of the puny infant the slip, and took him back to Glasgow in a cab.

The enterprising Jemima did not relish the care of the infant, which she had to undertake herself to make her plan stand up and almost immediately she went to work upon the admirers mentioned at the beginning of the story. The first victim was a middle-aged draper, it has been learned. With a wife, and daughters almost as old as Jemima herself, he did not argue much, nor protest when she told him the boy was his and she needed money to rear him, the indiscreet draper went straightaway to the bank and returned with close to a hundred pounds. A bank official, elderly, single, and of unquestioned probity and right business was the next. His guilty conscience made him a coward when she taxed him with paternity, and he made his contribution and slunk away.

With a few circumspect men who had been loitering around her little house in Glasgow without, compromising .themselves, the young woman was obliged to be more subtle, but her art was equal to the demands upon it. Knowing she had no holdover then she told them she was a grass widow, that her worthless lout of a husband had left her as their child was coming and that she faced a bleak future unless she got aid from friends. The appeal seldom failed to work.

Having profaned mother love as she plucked her victims, Jemima Aiton was beaten by it in the end. Ellen MacDougal did not weep a little and forget when the schemer stole her baby. She began a search which finally led her to Jemima’s Glasgow parlor – and her son.

[“’Queen of Hearts’ Rich Lovers Bluffed by Her Bogus Baby – How a Low-Born Scotch Girl Used a Stolen Child For An Extraordinary Career of Crime For Which She Now Must Pay,” The Ogden Standard Examiner (Ut.), Jul. 23, 1927, Magazine section, p. 1]

Picture of the dishonest whore

A brief interview with the University of Oregon