Now for Some Light Relief

I was watching a BBC series called Unforgotten tonight. It’s a very well written series with some outstanding acting which centres around an unsolved murder.

In a brief scene in the most recent episode my wife and I watched, the main protagonist (a female detective) comes home and unexpectedly finds her adult son has dropped in after a few weeks’ absence. She is delighted.

She sits down and watches him fry some bacon. As he stands at the stove flipping the rashers, a conversation begins. Mum wants to know what has been happening in her boy’s life and is seeking some relief from her intense and stressful occupation.

The young man relates a story about his mate who made a negative observation about his girlfriend’s backside. She smashed his jaw with the handle of a ping pong bat. The man relating the story smiles as he imparts this information.

He goes on to explain his friend lost eight teeth as a result of this blow.

Mum grins and asks him to keep chatting as she is enjoying simply hearing his voice.

And there we see the utter hopelessness of our attempt to bring some awareness to our society with regard to the complete absence of any compassion, empathy or outrage when men are sexually abused, emotionally abused or violently assaulted.

Imagine any other demographic being the subject of that brief interaction.

The young man smiles and says, “Oh, my mate’s girlfriend told him he had bad breath so he smashed her in the face with the handle of his ping pong bat and knocked out eight of her teeth.”

“Tell me more. I love listening to your stories.”

Let’s say a gay man gets his teeth knocked out for making a flippant remark. I feel alarmed just contemplating it. Perhaps a Muslim, African American, disabled or trans person is the victim. Would the scene get beyond the cutting room floor if presented in the same way, that is, as a mildly diverting source of amusement for a tired detective?

In what world would a writer and director have both participants in the conversation smiling broadly as the information is imparted if the subject of the assault was anyone other than a young, presumably white male?

There is no universe in which this would happen.

What can we deduce from this?

Men, in particular, white men, are the most despised, disposable demographic in our western society.

Such shocking examples of this hatred of men are plentiful. I see them every day. They are so ubiquitous you can understand why so many people are entirely blind to the quite stunning bigotry which is paraded before us each day. Decades of government, media and our education system promoting hateful lies and propaganda eventually seeps through to the strongest of minds.

What is to be done?

Remind yourself that the sun will rise tomorrow and do some deep breathing.

“If you are distressed by anything external, the pain is not due to the thing itself but to your own estimate of it; and this you have the power to revoke at any moment.”
—Marcus Aurelius

I try Marcus…I really do. 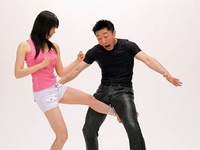