Lynched by the feminist mob-ette 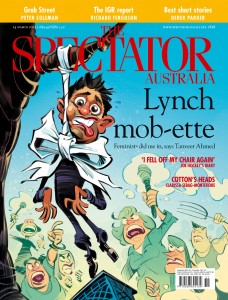 I have been considerably disempowered after writing about male disempowerment. Wading into the treacherous, virulent, oestrogen laden waters of modern feminism I have learnt that the gender wars are seen by many as a zero sum game, much like poker or derivatives trading.

The article was partly in response to my own experience of seeing relatives and patients who had been violent to their partners. I despised them as a child and adolescent, but with maturity and an education, came to understand that they experienced the social upheaval forced upon them through migration as a kind of humiliation.

I was labeled a misogynist and a blamer of women. Threatening messages were left at my practice. Nurses at my psychiatric hospital in western Sydney took me aside to apply their counseling skills to the public assaults on my character. ‘You’ve really pissed some people off, doc. Are you OK?’ This encounter occurred while actual patients were threatening self harm on the ward.

I had morphed into a wife beater and misogynist still pining for the patriarchy after suggesting violence is often an expression of underlying distress. It is alright to try to understand those sanctioned as bona fide victims oppressed by power, but anyone we see as privileged perpetrators are not entitled to exercises in illumination.

The saga was given extra juice for I was closely connected with the White Ribbon movement, a campaign whereby men wear a looped ribbon on their chest and encouraged other blokes not to bash women. My face was one of five to feature in their campaign. I had even gone to Pakistan a few years ago to help expand the campaign there, funded by AusAid. I met furtive, male activists in the cosmopolitan town of Lahore, female victims of abuse at the stronghold of Sufi mysticism in Multan and radicals who were incensed that violence against women was even stigmatised in the madrasah capital of Pakistan, the desert town of Bahawalpur.

Meanwhile, Western feminists remain focused on elite issues such as the pay of women on corporate boards or the wages of millionaire Hollywood actresses, as bemoaned by Patricia Arquette at the Oscars.

Fairfax polemicist Clementine Ford, described by Andrew Bolt as “some feminist with bared tattoos,” criticised my views for using the sneakiest, most privileged tool of the patriarchy, a “veneer of reason.” She also illustrated the ridiculousness of modern feminism being criticised as man hating, by writing “I don’t have time for men’s woe-betide-me feelings.”

Two nights after my column was published, Labor politician Tim Watts spoke in federal Parliament calling for my resignation. I watched online bemused by it all. An emergency teleconference was held with the administrators of White Ribbon. They asked for a clarifying statement, only to publish a press release the following day outlining how the CEO Libby Davies was shocked and that I was sorry for my views. I wasn’t sorry for my views, only that they were so horribly misrepresented. The contradiction was highlighted further by White Ribbon Australia’s chief scientific advisor, Dr Michael Flood, who had co-authored several studies across the region confirming male disempowerment as a growing factor driving violence against women.

A British men’s group published a story titled “Global feminism goes into meltdown as male supporter reveals he has a mind of his own.” A parallel, splinter group also called White Ribbon focused on violence against both sexes, begun by the global founder of women’s shelters Erin Pizzey, wrote an open letter of support on their website. I later learnt that the local White Ribbon movement was embroiled in a legal wrangle with the site for using the name without permission. I felt like a newly adopted child caught amid divorce proceedings.[Note]

Male victims of violence emailed me their stories of abuse and I was invited to speak at an upcoming conference in Toronto about modern masculinity, all expenses paid. Several local academics wrote to me, on strict conditions of anonymity, to tell me about how difficult it was to speak openly and scientifically about this issue in their departments.

Fellow psychiatrist and Marxist writer, Dr Tad Tietze, told me that I was seen by sections of the Left as an “Uncle Tom,” a term used for race traitors. This struck a chord because my wife and family joked that my growing inability to tolerate chilli laden food was a sign I was becoming a coconut: dark on the outside, white within. I was condemned to befriend other such traitors of my ilk, such as self-hating Jews, house Negroes and bananas – those outwardly Chinese in appearance but eager to adopt white, middle class ways to ease their desire for social climbing.

The White Ribbon site continued to be mobbed by posts demanding my resignation. Despite the group being about men, the hundreds of angry posts were entirely from women. The following day, White Ribbon issued a statement that the calls for my resignation were so persistent that I had been asked to step down. In a final twist in keeping with the totalitarian character of the entire episode, in order to be reinstated, I would undergo a recommitment program to make sure my views were in keeping with the movement. I packed my ribbon away in a basement drawer and sheepishly returned to my practice, no longer an ambassador for the cause, and resumed writing prescriptions for psychoactive drugs.

Editor’s note: White Ribbon Australia CEO Libby Davies apparently misled Dr. Ahmed about a legal wrangle with Erin Pizzey’s WhiteRibbon.org. There is no legal wrangle; no legal action whatsoever. Moreover, there exist no legal grounds for Libby Davies to take action against Erin Pizzey, her website, or her use of the 100 yr old white ribbon symbol. We are encouraged to learn Dr. Ahmed has not been dissuaded by falsehoods from sharing his perspectives about family violence.

This article first appeared in the print edition of The Spectator magazine, dated 14 March 2015 Aus
Feature images used at the head of this article also credited to The Spectator.

University of Wisconsin panel: men accused of rape should not be innocent until proven guilty