How the Southern Poverty Law Center cooks their books

As mentioned in an earlier post, the winter holidays have given us some downtime with which to reflect upon the Southern Poverty Law Center’s audited financial statements from 2006 to 2013. Having no accounting training beyond what we got as a college freshman years ago, we freely admit that spreadsheets, etc., are not our strong point, and so we ask our readers to look at the numbers and see what they think.

Is there a CPA in the house?

Obtaining the SPLC’s financial information is simple enough, as we described at the end of that previous post. Interpreting the numbers is the tricky part. 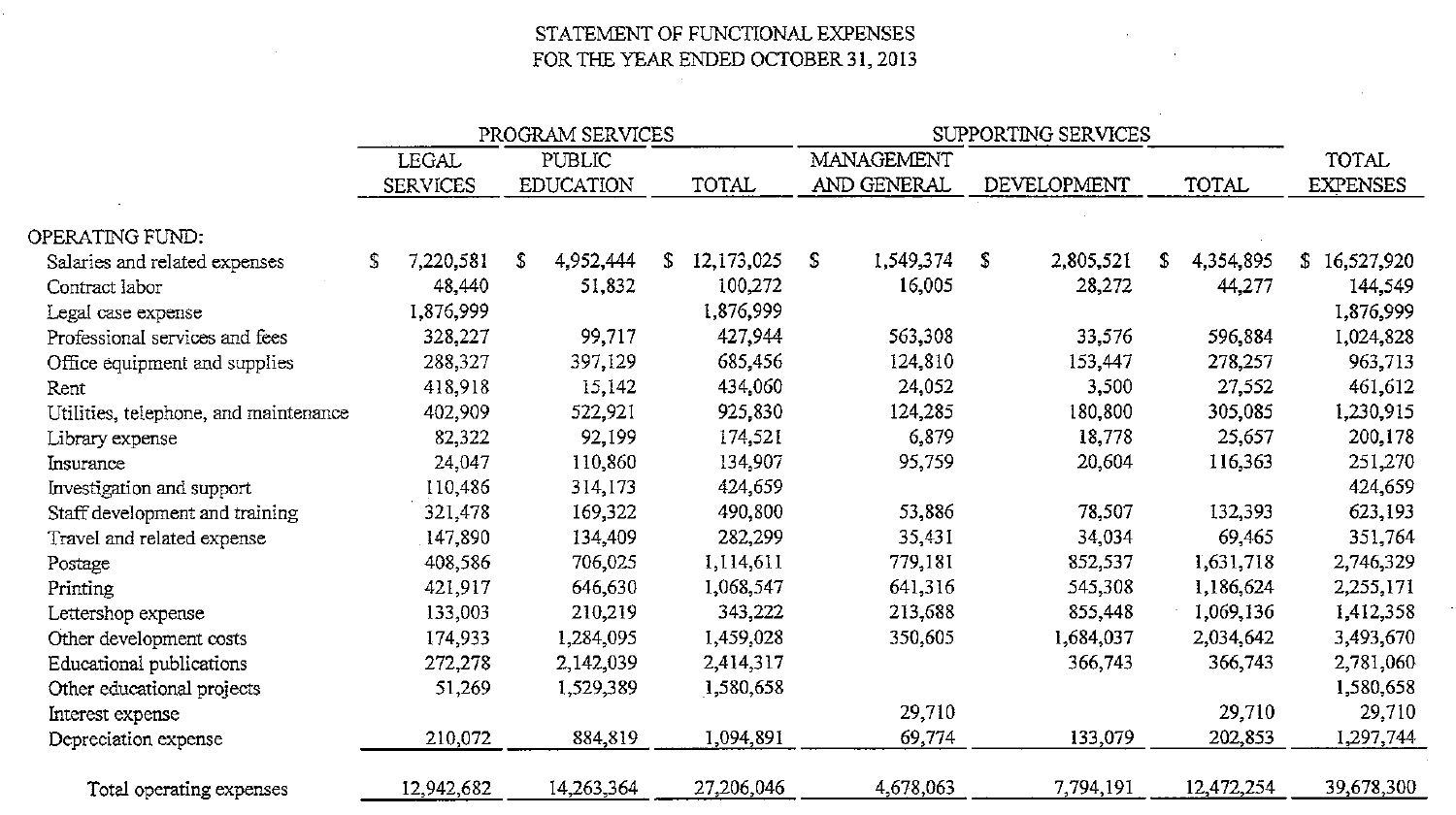 Above is a breakdown of SPLC expenses through the end of Fiscal Year 2013. With the help of the Internet Archive’s cantankerousWayback Machine, we were able to obtain the same information going back to 2006, and it is only after one compiles the numbers that patterns, and questions, begin to emerge.

For example, below is a compilation of postage costs claimed by the SPLC over the eight year period and using the same headings as the audited report.

Looking at the numbers for 2013 in particular, we can almost justify Development (Read: “Fundraising”) spending the better part of a million dollars on postage, because many of the SPLC’s mostly elderly donors still prefer snail-mail, but we’re having a really tough time understanding how Legal Services could rack up more than $400,000 in postage, and that’s down $80 grand from the previous year! Have they never heard of e-mail?

And that $400k is just a little more than half of what Management spent in postage last year! Is the management of the SPLC still using stone tablets to communicate? What gives?

Given the high labor costs associated with producing hieroglyphics and cuneiform, that might explain the SPLC’s printing expenses.

According to this, Management actually outspent both Legal Services and Fundraising, respectively, on printing costs. What the heck are the all-white managers at the SPLC printing with all of those tax-free donor dollars? And what, for that matter, is Legal Services printing to the tune of $422,000 dollars?

The SPLC doesn’t charge their clients for services rendered, so it can’t be for billing.

To make things even more confusing, Printing costs are a completely different category from Lettershop expenses?

Finally, we see Fundraising, er, Development, getting the lion’s share.

“Well,” you might say, “Hate is on the rise and these are necessary expenses. Plus, it takes money to make money, so Development needs to spend these donor-dollars on fundraising.”

If salaries are any indication of where the job growth occurred, it would have to be in the Legal Services sector, whose payroll jumped by a whopping 123% since 2006, compared to a rather anemic 39% for Fundraising.

Such an unprecedented bolstering of the legal team can only mean that the dedicated lawyers of the Southern Poverty Law Center are slogging it out in the courts more than ever, right? 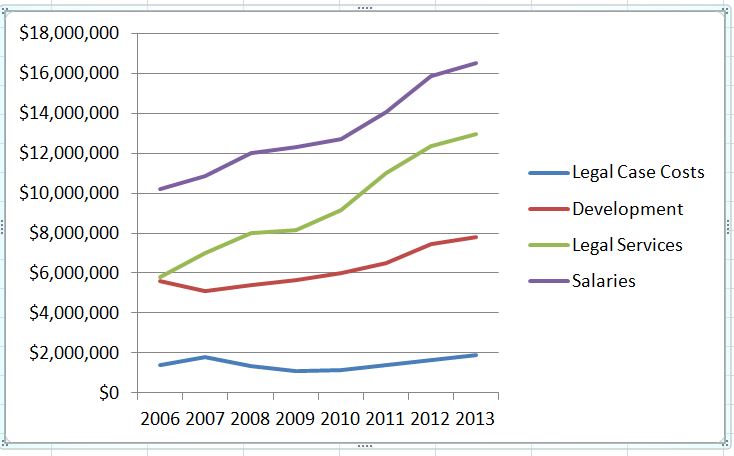 Oddly enough, Legal Case Costs have pretty much remained flat for the past eight years, as shown above, despite the more than doubling of Legal Services salaries.

So where is all that money going? How can SPLC Management justify $779,000 for postage in 2013? As with most SPLC mysteries, the answer is fairly simple.

The only plausible explanation is that the bookkeepers at the SPLC are probably engaging in an old accounting technique known as Joint Costs Allocation.

According to the American Institute of Certified Public Accountants (AICPA):

“[Joint Costs Allocation] focuses on expenses associated with certain joint activities, which in part serve a fund-raising function, but also have elements of program services or operations.

For instance, the expenses associated with an educational mailing that also includes an appeal for donations might be jointly allocated between program services and fundraising expenses.” [Emphasis added]

How does it work?

“Joint costs allocation is unfortunately an area where NPOs [Nonprofit Organizations] sometimes use questionable financial practices, such as arbitrarily dividing up and spreading most or all of their actual fundraising and/or operations costs in their financial reports among their various program services in order to make it appear that they have very low fundraising and overhead costs.” [Emphasis added]

And what’s the problem with it?

“That contrasts with legitimate accounting procedures for accurately assigning a particular program service (or fund or grant) its true share of the operations and overhead costs.”[Emphasis added]

And here’s what the American Institute of Philanthropy’s Charity Watch has to say about the procedure:

“In nonprofit financial reporting, the funds spent on telemarketing, direct mail, or other solicitation activities that also include an “action step” or “call to action” are referred to as “Joint Costs.” Charities often use joint costs as a way of inflating their reported charitable program spending and deflating their reported fundraising costs. [Emphasis added]

Although the use of this accounting “trick” is often perfectly in line with the accounting rules for the reporting of joint solicitation costs (AICPA SOP 98-2), these rules allow for many interpretations and judgments that can produce questionable results.” [Emphasis added]

Questionable results. Perfectly legal. Inherently scuzzy.  Remember this the next time you write a check out to the SPLC.

You think this is a one-off aberration? Check out what the SPLC claims for “Office Equipment” expenses versus Legal Case Costs to see where your donor dollars really go. 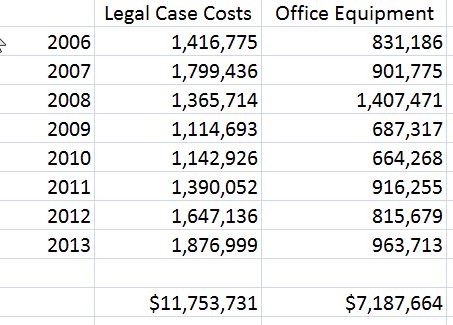 To those of you who believe your donor-dollars actually go toward “fighting hate” and “civil rights” law we only ask that if you have any legitimate explanation for the bizarre numbers we’ve cited, please share them with us.

If an average of $898,000 a year for office equipment and $711,000 for Management postage costs sound like legitimate expenses, we’d like to hear from you. As always, we remind our readers to never take our word for it. Look at the SPLC’s own documents and come to your own conclusions, and please share them with us.

If the Southern Poverty Law Center is actively obfuscating on such primary documents as their own audited financial reports, what else can they be “exaggerating”?