C.S. Lewis: The Feudalisation of Love

Traditional conservative sex roles, liberal-feminist concepts regarding sexual liberation, and traditional feminist views about sexual relations are all heads growing from the one Hydra. What aim do all of these ideologies have in common?

The answer is beautifully captured by C.S. Lewis’ phrase “a feudalisation of love.” That’s what these worldviews hold in common.

According to Lewis, the feudalisation of love (FOL) refers to the medieval event when the feudal contract employed between Lords & vassals was repurposed by noblewomen. These women believed the feudal contract could serve as a new model to govern sexual relations, whereby a woman would assume the role of Lord, and man her vassal symbolised in the iconic display of a man going down on one knee before her.  After a continuous process of cultural diffusion the formula appears in most countries today, such has been its remarkable power to colonize.

Lewis states that in comparison with the revolution generated by the feudalisation of love, the Renaissance amounts to a mere ripple on the surface of literature. It forms the internal rationale of post-industrial traditionalism, romantic love, and especially for the various waves of feminism which embraced this idea with greater fervor, applying its principles ever more aggressively with each iteration of the movement.

Lewis places a precise date on the rise of feudalisation of love, claiming it appeared quite suddenly at the end of the eleventh century in France. He describes it as an elitist fad spreading to all the courts of Europe while subsequently permeating down the vertical axis to capture the imagination of lower classes. The spread was so thorough that FOL is now regarded as a “timeless” and “natural” human arrangement, held up as as a sacrosanct pillar of human evolution by layperson and academic alike.

The fact that FOL is not a timeless universal of human biology has been demonstrated by Peter Ryan whose exhaustive investigations reveal the rise of gynocentrism to be a perversion, or what I have elsewhere labeled as a supernormal stimulus.  Despite these debunkings however, the belief in the “timeless” and “universal” nature of FOL continues unabated.

FOL leads to poor treatment of males, serving as root cause of the malignant outcomes tackled by men’s advocates. Among the catalogue of negative outcomes is the act of male suicide — and yet even family members, friends and academics who have lost loved ones (men) to suicide remain leery about naming this lack of social value directly: it is caused by both the gynocentrism and misandry inherent in feudalisation of love.

The only place where female suicide is higher is in rural China: ergo where women have lower social value than men. China is also the place where the feudalisation of love never took root in the culture because it was explicitly outlawed there by Mao during the cultural revolution, because it was viewed as a disintegrative culture product. 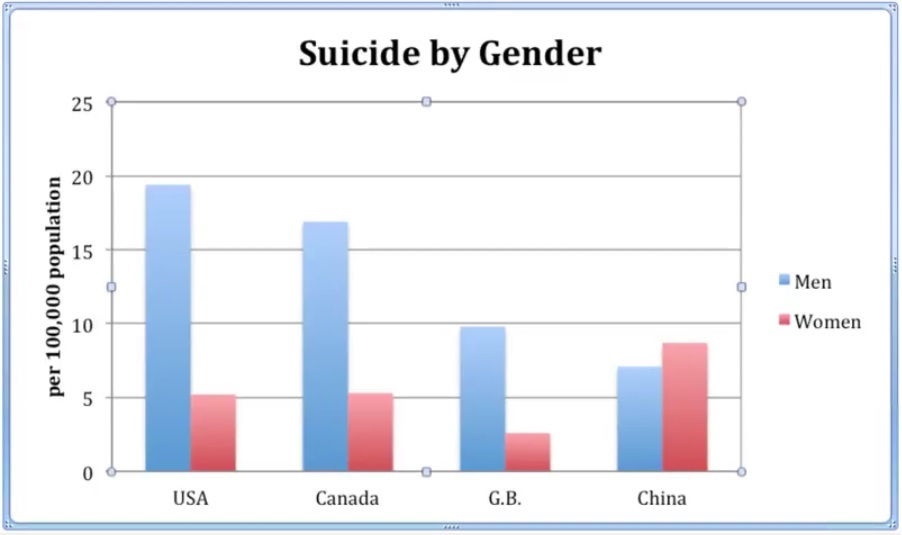 Outside certain parts of Asia most cultures are decidedly gynocentric, hyper-valuing women’s identity, needs and wants. While there are many factors that can contribute to male suicide, if we were to address men’s devalued sense of self by removing FOL, then the majority of these men would not suicide because they would be buoyed by that magic ingredient – value. This can only happen if we voice a full throated diminution of gynocentrism, running in tandem with a social revalorization of men and boys.

Those who believe in and adhere to the FOL script in their relationships, please don’t come calling when it begins to hurt or when tragedy hits. First, you must divest yourself of it and then we can talk and perhaps find a way out of the maze.

All of the above is part of the grand culture cycle we find ourselves in, dictated by peculiar customs and conventions just like every epoch that has gone before it. Fortunately, we might be saved from the status quo by a little formula proposed by Hegel that characterizes the evolving face of culture as an endless loop of three developments: 1. thesis, 2. antithesis, 3. synthesis. While its hard to guess, when applied to our current culture his formula might play out like this:

For the sake of humor I’ll refer to this hypothesis as the Other Great Reset, hopefully one that will bring us back to a saner baseline.