This article is one part of a series exposing corrupt, fear-mongering academics who used police officers and lawyers to silence a single student while they move to crush his free speech and Title IX rights. Read Part II here and Part IV here.

Tom Pynn’s background is so saccharine that you can’t help but suspect he’s up to something (emphasis mine):

Tom is Senior Lecturer in Philosophy and Interdisciplinary Studies at KSU. He holds an M.A. in Literature and an M.A. in Philosophy both granted by the University of Mississippi in 1992. His thesis in Literature is about the themes of Love, Marriage and Place in the poetry and non-fiction essays of Wendell Berry. His thesis in Philosophy is entitled, “Merleau-Ponty’s Theory of Perception.” His interests in Literature include post WWII American poetry, especially the writings of the Beats; the novels of Henry Miller; and ancient Chinese and Japanese poetry. In philosophy his interests include phenomenology and existentialism, aesthetics, Classical Indian philosophy (Yoga and Vedanta), Daoism, Buddhism, cross-cultural philosophy, and indigenous philosophy (especially North America). Recent publications include both essays and book review essays on such topics as Jack Kerouac’s Buddhism, yoga philosophy, Zen ethics in leadership, the ethical implications of karma, and Bob Kaufman’s aesthetics. He is currently an associate editor of the Southeastern Review of Asian Studies. Tom has been active in various forms of peace work for more than twenty years. Some of his activities include, founder of the Athens, Ga. chapter of Pax Christi, activist for Greenpeace, U.S.A., activist on the Nuclear-Free Athens Campaign, Board Member of Alternative in Action!, and Green Party organizer and activist. He is currently the faculty advisor to the KSU Peace and Justice Coalition. Tom’s creative interests include composing poetry, playing music, hiking, and gardening. In his spare time he collapses.

In summary, Tom Pynn has dedicated his life to becoming a middle-aged Californian. He is the kind of man that would put mint in his water and smile warmly at the dolphins leaping in front of the sunset at his beach house. The kind of man that would gnaw thoughtfully on turkey-flavored tofu as he cultured himself with Haitian prose in a candlelit bath.

This is a man so domesticated that feminists actually feel comfortable around him.

I suppose he would be admirable if he didn’t come off as the Pynnacle of pretentiousness. (Stop groaning, that pun was gold.)

Surely someone with such a polished image could do nothing wrong. Except he did. He told a lie that ended Sage Gerard’s friendship with Dr. Liza Davis, Zen Men’s first advisor and what was then Sage’s strongest connection to the Kennesaw State University (KSU) honors curriculum.

Here’s the only email Sage ever sent to Mr. Pynn-a colada.

What the hell is wrong with you people?

On Wednesday September 03, 2014, at approximately 1624 hours, I was dispatched to the Social Science Building, room 2005, in reference to harassing communication.

So the investigator was dispatched at 4:24 PM. When did Sage send the email? 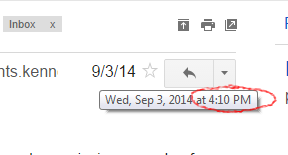 The instant Tom saw Sage’s email, he spat out his white peach tea and knocked over his cage of doves to call the cops. Pynn, trying to sound coherent while sobbing snot-bubbles, shrieked that a big Nazi-skinhead-Klansman-homophobe ginger meanie harassed him with one email.

And what did the officer have to say about the “possible threatening email?”

I observed no threatening messages.

Tom Pynn cannot possibly be an activist. He manages to be both too soft and too high-strung to function under pressure. Pynn is just another demagogue that leverages his personal brand to make people look bad next to him.

So why did Sage send that email? It was not threatening at all, but it did seem like Sage had something he really wanted to talk about.

Here’s a chance for us to dig more into the back story of the year-long smear campaign by the Kennesaw State University Interdisciplinary Studies Department (ISD).

Remember that Sage did not always know that people in the ISD were working behind the scenes trying to sabotage what was then named KSU Men (“Kennesaw State University Men”), now renamed Zen Men. In KSUM’s early days, Sage was working alone and had a single adviser, Dr. Liza Davis. Dr. Davis and Sage were on great terms. Outside of KSUM, Dr. Davis acted as Sage’s primary contact for the KSU honors curriculum. This means that Sage is going through the honors college on KSU, and he periodically sits down with Dr. Davis to go over what is expected of him to get honors credit. Sage, out of respect, asked Dr. Davis to be KSUM’s first faculty sponsor.

Some time later, Sage got this email from Dr. Davis. 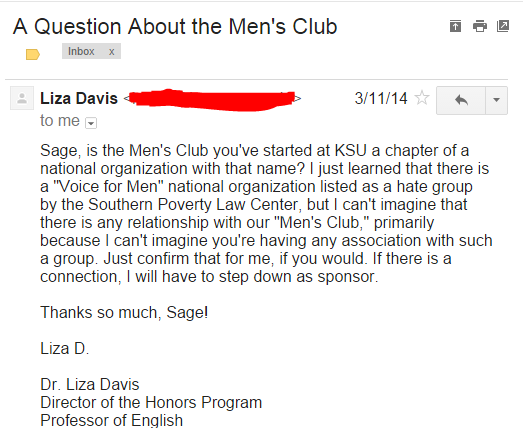 Sage provided Dr. Davis all of the information she needed. No, KSUM is not a chapter of AVfM. And the SPLC never actually listed us as a hate group, as has been endlessly explained numerous times by numerous sources, including the SPLC itself as well as its hired gun Arthur Goldwag.

She left anyway, claiming that Sage was lying to her, and insinuating that it was Sage’s fault that she didn’t know anything about KSU Men (including it’s name, apparently).

Student organizations need advisors to reserve space, rent equipment and basically do anything on campus. Student organizations without advisors are eventually rendered defunct, which appears to be exactly why ISD made a dedicated, organized effort to remove KSUM’s advisors. Dr. Davis did exactly what ISD wanted and jumped ship with nothing but conjecture backing her. This threatened the continuation of the Male Students in Peril conference as well.

If you have not yet realized why ISD is politically-motivated, it should become clearer now.

Male Students in Peril almost didn’t happen because of Tom Pynn’s email, which spread the stink smeared by Arthur Goldwag’s old, and now retracted, insinuation that AVfM is a hate group. Arthur, when you realize your ill-informed generalizations from years ago have caused an innocent student much undue hardship, remember that a healthy human being would express remorse.

Anyway, someone Sage trusted as a friend and as a fellow scholar thought Sage was associated with the likes of the Klan and the Westboro Baptist Church, which the SPLC actually lists as hate groups, unlike anyone affiliated with this site or with Zen Men (formerly KSU Men).

A lot of stuff happened in the meantime that we will cover in future articles, so we are going to fast forward a bit. Actual-journalist-with-a-brain Sierra Hubbard posted a news piece in The Sentinel, and Sage went to Dr. Davis to let her know that her SPLC concerns should be put to rest. Dr. Davis stated that she had “reliable sources” for her concerns about AVfM. Sage asked what they were, and Dr. Davis refused to tell him. Concerned that the one advisor KSU Men had left would be hearing from a liar soon, Sage followed up with Dr. Davis. 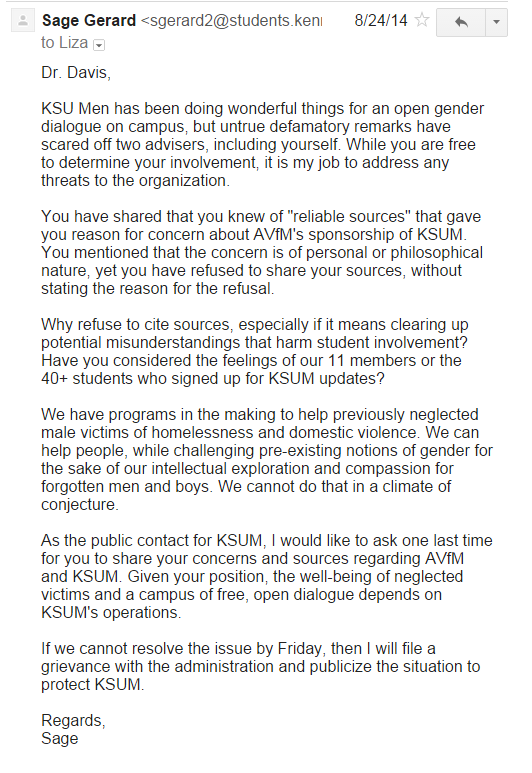 Note for clarification that Sage never made a focused effort to publicize Dr. Davis’ involvement when trying to rectify the situation. At the time that e-mail was sent, Sage was unsure what other options he had, but then learned about some new internal procedures and tried those instead.

Dr. Davis said to Sage, among other bullshit, that “some may perceive the tone and closing line of your email as threatening” and CC’d Dean of Students Dr. Sansivero. Dr. Sansivero told Sage to take care when using the word “defamation” (oh, the irony) and talk to him instead. He didn’t realize it at the time, but Dr. Sansivero would end up playing the facilitator role in many events connected with Sage.

Sage finally filed an open records request for emails in which he was discussed around Dr. Davis.

What were Dr. Davis’ “reliable sources?”

Surprise surprise: it was Tom Pynn.

Chronologically, this email is the earliest incident of ISD involvement in our records.

Sage later scheduled an appointment with Dr. Davis to discuss his honors assignments, since she had the most experience with his academic records. They were not going to talk about KSU Men at all. Right before going to that appointment, Sage was informed that his appointment was moved to a different person in a different building.

Dr. Davis will no longer speak with Sage.

This is so, so wrong.

Tom Pynn, are you starting to understand how badly you screwed up? Did you stop to ask yourself why a supposed hater of women would ask a woman to sit in a vital position for KSU Men?

But you can’t take all the credit, Tom. After all, Dr. Davis encouraged you to bring your lies to the attention of other ISD faculty members. You gained an ally on a lie, and you two set something horrible in motion that I will cover in more detail in future articles. But at minimum, you severed a connection for an honors student, which means you encroached on a student’s academic career. You smeared a student you never even met, then sat by sipping tea when Sage experienced greater harassment and threats to his academic and future professional career. Because you didn’t like his political point of view.

My ultimatum to you is the same as the one to Stacy Keltner: If you choose to stand by your dishonest image, I will dig through all of your connections, your history and your publications, then email your colleagues and superiors all of the reasons they should consider working with other people. I’m sure the network of anti-feminist YouTubers and bloggers looking for content would also have a field day if I pointed them to ISD’s publications. Those who think I am just “harassing women” with this article series are too stupid to realize that there is such a thing as corrupt public servants and that they can be any gender.

Tom, if you and your buddies own up to your crap like grown-ups and make amends with Sage, then I will back off. I will even edit my articles to leave notes showing which of you decided to take responsibility for your mistakes.

Staying silent is not going to save you. No more playing politics and operating behind the scenes. If you are an agent of peace, love, understanding, diversity and inclusion then prove it and do the right thing.

My name is Jack Barnes and I am a serial rapist