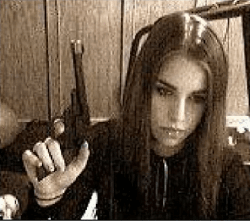 In April of 2006 12 year old Jasmine Richardson lured her boyfriend into helping her murder her parents and her younger brother so that she could go live with him.

The cited news story attempts to paint a picture different than the reality that Richardson was the mastermind of the crime by posting a younger innocent looking picture of her and giving it the caption “Before Jeremy,” and then showing picture of her in goth make-up, stating “and the transformation begins.”

But police investigators uncovered internet communications between the couple that clearly identify her as the one who instigated the crimes. Her first known communication about the crime was a message to the 23 year old boyfriend that said “”I have this plan.  It begins with me killing them and ends with me living with you.”

Pussy power at 12? You betcha. The power to solicit murder, provided the recipient is of weak enough mentality.

And it was Richardson, who, after hearing her eight year old brother plead, “I’m scared. I’m too young to die,” plunged a knife into his chest. The boyfriend followed that by cutting the boys throat. The couple murdered her parents in another room of the house.

In a follow up to this story, Richardson, who was sentenced to 10 years, is now out of prison and in her freshman year at Mount Royal University in Calgary, Alberta. Her parents and brother remain, as far as is known, dead.

In one particular bit of coverage from 2009 there were still concerns that this young woman did not understand the gravity of her actions.  View it here.

660 News, which reported the follow up story about Richardson attending school at MRU, did not reveal her name in their bit. They say it is because her “identity is protected.”

No it’s not. Her identity and deeds are PUBLIC RECORD. Her name is Jasmine Richardson. She is a murdering bitch now attending school at Mount Royal University in Calgary, Alberta, Canada, and you can find her listed in the registry at Register-her.com.