The problem with “We need more women in—”

The gender gap in science, technology, engineering, and math (STEM) fields has seen no shortage of coverage, in media reporting and academic studies alike, in recent years. Theories on this disparity range from speculation about biased hiring practices to blaming Barbie dolls. Conjecture aside, there is one indisputable and widely documented truth to this imbalance in gender-diverse representation in STEM fields: women simply are not as interested as men.

It has been reported that an estimated 14.5% of female students express an interest in a STEM field—particularly in biology, chemistry, and science—in stark contrast to an estimated 39.6% of male students. Despite reports that women earn an estimated 33% more working in STEM fields, they make up a mere 24% of the workforce. This can very realistically be attributed to the lack of interest in a number of related occupations, especially considering roughly 90% of registered nurses, 78% of clinical laboratory technologists, and 60% of accountants and auditors are female. Combine that with female interest in law and most medical fields steadily rising and it is reasonable to conclude that women aren’t becoming chemical engineers and environmental scientists at the same rate as men because they’re more interested in doing something else.

The typical response to this is for people to ask, “How do we get women into—?”

In 2012, President Obama launched a new Cross-Agency Priority Goal, which emphasized providing additional focus and support to women. In 2013, the administration’s five-year STEM Education Strategic Plan was released, listing as a priority the need to increase the participation of women. In addition, affirmative action is still offering preferential treatment and special consideration to women during the application process for schools and jobs alike (many universities, colleges, and companies have a diversity quota). However, some people still feel it is the obligation of any employer to intentionally seek out female candidates for jobs, regardless of expressed interest. 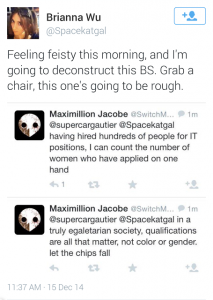 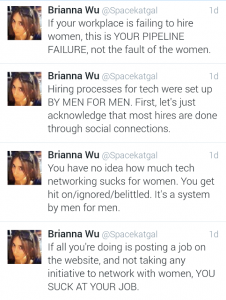 At the time this post was published, it appears 45 people agreed with the above statements enough to share them on Twitter. I am not one of those people. My response to the “How do we—?” question is simpler, less costly, and guaranteed to piss off a lot of people.

I do not believe that women should be sought out for jobs that are publicly posted if there are already qualified candidates interested. If you believe this should be the case, then you are promoting bias and discrimination on the basis of nothing but gender.

You are more interested in the demographic breakdown of an industry/company/area of research than the quality of work, or employee, involved in said area. I believe that by actively seeking out women to fill a certain percentage of a specific field, you are not only turning women into tokens but also promoting a very troubling belief that they should expect special treatment and consideration for just being women. In addition, you are teaching girls and young women that, no matter what, they will be viewed by their gender first, and all else will be secondary. A troubling and heartbreaking side effect of this is that the same will happen with boys and young men, although the outcome will be much less pleasant for them.

I believe that all healthy human beings should be held to the same expectations, that work should be judged on its merit, and that a qualified and interested potential employee should be given a job that he or she applies for. I don’t believe that special consideration should be awarded to women, especially for no reason other than they happen to be born women. I also don’t agree with sending the message that no matter how hard a man studies and works and fights in order to advance himself academically, it will never be enough to combat a woman being a woman in an industry looking to meet a quota.

And I certainly don’t agree with pushing a specific area of study or occupation at a woman whose interest lies elsewhere.

How much did feminism cost Romania in 2014?