Three weeks ago Rolling Stone published an article by Sabrina Rubin Erdely. It chronicled the story of a young woman named “Jackie” who was (allegedly) “brutally assaulted by seven men at a frat party.” According to Erdely, “Jackie” tried to get the University of Virginia to take her (alleged) sexual assault seriously, but the university was indifferent because it wanted to protect its reputation.

It is hard to overstate the degree of exposure this piece achieved. Nearly every major media outlet reported on it (for example, CNN, PBS). Sweeping reforms were demanded at UVA. The university president, Teresa Sullivan (who had actually resigned as president in 2012, only to be reinstated later), suspended all Greek activity at UVA.

Massive hatred was poured upon fraternities through a plethora of channels. The frat house itself was vandalized, and the members were demonized (see the various pictures in this post for examples).

The Kool-Aid drinkers were out in force, lashing out at men as a group, at fraternities writ large, and university administrations. Simply read through the comments section of the RS article and see for yourself. Or check out the #istandwithjackie Twitter feed.

Perhaps she thought she could get away with it. And granted, if this were the 1990s, she very likely could. But we live in 2014, an age when information is not only much more free but also travels much more quickly.

Since her initial article in mid-November, more facts discovered by other news organizations have come to light that do not support “Jackie’s” story, let alone Erdely’s article. The cumulative impact of these facts has prompted Rolling Stone to write a retraction, in which they said, “we have come to the conclusion that our trust in the accuser was misplaced.”

When taken altogether, these discrepancies look very bad for “Jackie’s” story. And it’s not just the facts that make the story look bad, although they are indeed primarily what does.

Oh by the way, here are the noble crusaders: 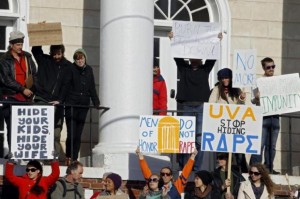 Let’s take a look at how Erdely wrote the story in Rolling Stone. Take this passage, for example:

She remembers every moment of the next three hours of agony, during which, she says, seven men took turns raping her, while two more – her date, Drew, and another man – gave instruction and encouragement. She remembers how the spectators swigged beers, and how they called each other nicknames like Armpit and Blanket. She remembers the men’s heft and their sour reek of alcohol mixed with the pungency of marijuana. Most of all, Jackie remembers the pain and the pounding that went on and on.

“Armpit and Blanket” were what these frat members called each other? What, they didn’t just call each other Lunkhead #1 and Lunkhead #2? I thought all frat boys were lunkheads? The point being this: Erdely’s story is so caricatured and saturated with stereotypes that we should immediately question it on that basis alone.

Take a look at the next passage:

“One of my roommates said, ‘Do you want to be responsible for something that’s gonna paint UVA in a bad light?’” says Jackie, poking at a vegan burger at a restaurant on the Corner, UVA’s popular retail strip. “But I said, ‘UVA has flown under the radar for so long, someone has to say something about it, or else it’s gonna be this system that keeps perpetuating!’”

The language here is so contrived that it looks like the entire conversation was manufactured for political purposes. We are led to believe that “Jackie’s roommate” plays devil’s advocate and takes the side of the university, despite her having no real interest in doing so. And all of a sudden, “Jackie”—who never went to the police or the hospital despite supposedly suffering severe injuries—now talks about how it’s everyone else’s fault that the issue has “flown under the radar” for so long.

Feminists are now redirecting their crusade toward criticizing Rolling Stone for publishing the retraction. Don’t get me wrong: they don’t disagree with Rolling Stone presuming the guilt of the accused men. Feminists are just fine with that, and they are maintaining their practice of labeling “Jackie” a “victim” and a “survivor,” even though we not only have no real evidence that she is either of these things but also have strong evidence that she is not).

Here’s what one feminist, who writes for Slate, Salon, and other online media, says: 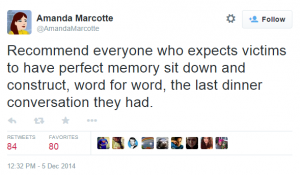 In a sense that is true that people don’t have to have a perfect memory to have a case; people can easily mess up on dates and times. I do it myself occasionally.

But there is a matter of degree as well. Expecting accusers to have a perfect memory is one thing. Expecting accusers to not tell a story that is overwhelmingly contradicted by evidence is another. Messing up on 10% of your story—a 10% that doesn’t call into question key events? Okay, maybe there’s something we can still work with. Messing up on 90% of your story? Expect to get called out on the carpet.

Yes, some people have accidents. And for others, “accidents” happen with remarkable consistency. And “Jackie” clearly falls into the latter category. 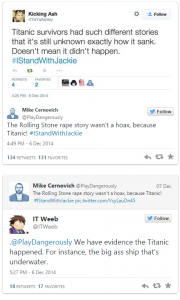 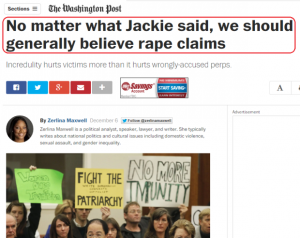 The word “automatically” was later changed to “generally.” Here is what she has to say in the article:

We should believe, as a matter of default, what an accuser says. Ultimately, the costs of wrongly disbelieving a survivor far outweigh the costs of calling someone a rapist. Even if Jackie fabricated her account, U-Va. should have taken her word for it during the period while they endeavored to prove or disprove the accusation. This is not a legal argument about what standards we should use in the courts; it’s a moral one, about what happens outside the legal system.

Ah, you mean like what we did back in the days of slavery, right? Back when we acted “outside the legal system”?

This is why feminists, with their bigoted due-process-be-damned mentality, do not deserve a seat at the table in these issues. It’s not just that they get it wrong in “one or two cases.” They are hostile to the basic concept of not presuming a man is guilty because they are hostile to men as a group. No, not just “a few men who happen to be rapists.” All men.

The utter hypocrisy of feminists like Zerlina Maxwell—to be presuming guilt on the basis of one’s arrangement of chromosomes and then lecturing those who disagree on “morals.”

Here is what leading feminist website Jezebel thinks when a user doesn’t say the rape accusation is false but merely questions whether it’s possible for it to be: 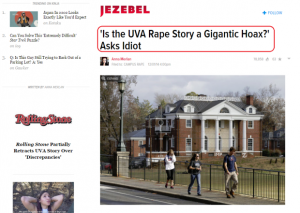 Feminists & friends are now all a-twitter at #istandwithjackie. Why do they stand with Jackie? This feminist, author of the book Full Frontal Feminism, founder of the uber-popular website Feministing (popular among feminists & friends anyway), and columnist at The Guardian tells us why in a simple tweet: 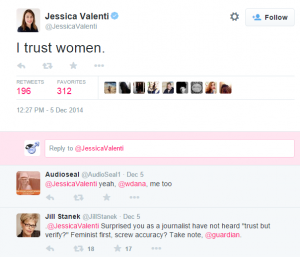 Well, too bad—I do not trust women. But then again, I also do not trust men, White people, Black people, or any other “group,” period. I trust individuals. I don’t presume that individuals are good or bad, or trustworthy or untrustworthy, based on what group they happen to be born into. Unfortunately, we cannot say the same for feminists like Jessica Valenti.

Feminists say they trust women, but in fact they only trust the women who support their narrow, dogmatic, and generally anti-male worldview. They hide behind women as a group—indeed, they use and exploit women—to throw venom-tipped spears at men and boys.

I must give a shout out to The Community of the Wrongly Accused, which describes the implications of this case expertly in a must-read article:

The Rolling Stone debacle did not happen in a vacuum. The sordid saga of the infamous article about a supposed gang rape — the fact it was written in the first place, then published in a mainstream magazine, and then unconditionally believed by so many — is the product of a culture that has allowed gender extremists to dominate the public discourse on sexual assault. These are people who demonize college men and reduce them to vile caricature; insist that college campuses are rape pits; claim with a straight face that women don’t lie about rape; and preach that due process for men accused of rape on campus is a luxury college women can’t afford. In short, they buy into “rape culture.” 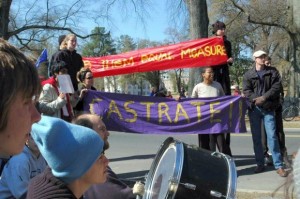 It is beyond clear that “Jackie” is not just an “imperfect” accuser; at this state in the game (which is no short time of two years), she is an accuser with near-zero credibility. And the possibility that she was never a “victim” or a “survivor” in the first place just might be why she never went to the hospital, or to the police, and forbade Rolling Stone from interviewing the men she accused to understand the bigger picture.

Is it still possible that “Jackie” was a victim of rape at a frat party on the UVA campus? Highly, highly unlikely—and that’s where my “judgment” will rest.

When this story broke a month ago, I was tempted to do a writeup on it but felt that waiting would be better. As we have done in the past (see here and here), A Voice for Male Students will continue to maintain a policy against presuming guilt simply on the basis of sex. We will leave the less morally inclined feminists to shoot themselves in the foot over cases like these.

The time has come to seriously reconsider the prominence feminism has in conversations on gender. Rape is a significant issue on campus, just like false rape accusations are a significant issue. But neither is an “epidemic,” and the kind of bigotry and hatred that feminism advocates should not lead the way.

We do not need to punish students who have not been found guilty of a crime, and the time has come to leave it up to the real professionals—the criminal justice system.

This post was originally published at A Voice for Male Students.—Eds.

Not everything is black and white, Eddie

What is a Man?

The morality of punishing the innocent