A weak case for the humanity of men

in A Voice For Men, Featured, Psychology

This article deals with extremely delicate subject matter, the grossest of human behaviors including rape, murder, pedophilia, all explored alongside common disgust inducers: poop, shit, blood, brains, foreskins, piss, ball sacks and boogers, as well as in-group/out-group behaviors. Women and conservatives may be particularly offended. If you find the title offensive, please keep reading, you are exactly the type of person we are trying to reach. We’ll be exploring the biologic and sociologic reasons for why some people implicitly and explicitly reject the humanity of men.

Additional warning, this article contains links to a disturbingly in depth analysis of ass-hair.

You have been warned.

In order to discuss human grossness, we do well to start with men. Men, for the purposes of brevity, are defined loosely as adult human males, distinct from boys, girls, and women. When you subtract prisoners, the homeless, and the mentally ill, the remainder of integrated men account for roughly 20% of the population. This group, aka “The Good Guys”, are the least gross group of men, but yet still manage to create 80-100% of the human generated grossness, according to informal surveys of gender theory professionals.

It should also be noted that a disproportionate of the 1% are also men.

Let Us Not Talk Falsely Now…

Any kidding aside, men, as a group, are gross. In addition to pooping (biologic), shitting (behavioral), pissing, sneezing, and picking boogers like everyone else, they also have foreskins, scrotum, and a greater preponderance of ass hair.

While none of these are necessarily reflections of character, they certainly color how men are viewed as a group. Ass-hair preponderance cannot be ignored, as ass-hairs are potential parasite and pathogen carriers, and human shit is gross to everyone, except maybe Coprophiliacs.

The term “Toxic Masculinity” will be explored briefly as toxicity is a common attribute of grossness. A complete exploration is neither necessary or possible, suffice it to say, for the purposes of reporting on the general grossness of men as a group. Many of the grossest of human behaviors are attributed exclusively, or overwhelmingly to men. 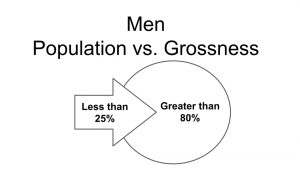 Cannibalism, male homosexuality, pederasty, and coprophiliac acts are overwhelmingly performed by men. Yet, some men, and even a small minority of women, still complain that men may feel pain, or are in some way disadvantaged. Often they will include boys, male homosexuals, or the gender dysphoric in their statistics, in an attempt to illicit some sympathy.

Anyone who attempts to deny the fact that men, as a group, are disproportionately responsible for the above activities is being intellectually dishonest.

Men’s Rights Activists often use crude humor, inflated statistics, or show men’s issues dramatically out of a broader context in an attempt to bolster their arguments that some of our systems favor women, or create a narrative that men are somehow victims of society.

Some arguments typical of the MRA’s are shown below without percentages, so as to remain value neutral in their analysis and to avoid legitimizing or validating any of the arguments or claims of derogation. Links are provided for purposes of completeness.

Examples of these weak arguments:

If you found any of these value neutral arguments insulting, false, misleading, or feel they demonstrate a failure to show the context of the relative suffering of women and children; If you feel that this specific aggregation of information was offensive, or, if you merely observe that men are, in fact, the actual cause of most these problems… you may be one of the 85 – 100% of people who do not automatically self-identify as men, according to one 2004 study published in the APA.

If you have an understanding of out-group social biases and behaviors you will understand the paragraph above demonstrates automatic out-group bias and derogation, (Group Homogeneity, Just World Hypothesis, System Justification Theory, Stereotype Threat) against men. You were more likely than not, in some way, agitated by value neutral arguments about an out-group’s experience. If you are a man, you likely received a testosterone spike as if you were facing the “Bad Guys from Across the River” by the implication someone might be sticking up for men.

We are Individuals; They are a Group

According to the APA study, men may lack the mechanism for automatic in-group bias. This trait appeared among all of the men tested, across several tests based on four separate hypotheses: Sex positivity, a feeling that men are threats, competition, or that individuals represent the stereotype of men.

Men appear to be just as likely to derogate men as women are.

In short, if you are one of the 85-100% of humans who do not view men with automatic in-group bias, it may surprise you that regardless of your age or gender, or sexual orientation, you are likely to automatically view men as a subhuman out-group.

All humans view out-groups as subhuman, deserving of derogation or dehumanization. Out-groups are perceived as homogenous stereotypes of the group’s members worst behaviors. (see the list above)

They are also perceived as the architects of their own misfortune. As an automatic out-group, men are automatically subject to nearly every social bias human beings exhibit. All human beings exhibit out-group bias. Some groups try to veil human nature with political correctness but it’s always there. 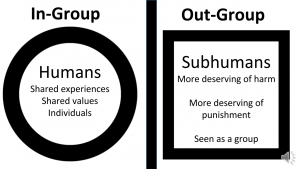 Whether you are a woman or a man, you view men as a part of a stereotype, until they prove themselves otherwise and maintain their position. As soon as men fail to meet your expectations, your view of them through the stereotype sets in. Because we believe that subhumans in the out-group deserve whatever they get  and were probably the cause of their own misfortune, the derogation of men seems both natural and acceptable.

In fact, some of you may even be abusing men to increase your in-group esteem, and to possibly relieve your own depression via chemical reward which you receive directly from actively derogating men. All the while, thinking you’re behaving reasonably and in the best interest of the tribe. Congratulations, you’re an asshole. Unfortunately, it turns out that everyone is kind of an asshole.

While commonly accepted gender theories view issues through a lens of oppression, men’s issues are clearly issues of derogation (to detract, disparage, or belittle, to take away or remove, so as to impair the whole, to degenerate or debase.)  This happens in relationships as well as institutions. Law enforcement, social workers, judges, teachers, and parents are subject to the same drive to systematically derogate boys and men. It seems parasite stress is a protective, biologic imperative to do so.

Men’s own willingness to dehumanize other men seems to be a feature of humanity, rather than a bug.

Comparing derogation to oppression seems to create even greater confusion and frustration. While women may be exposed to greater subjugation or dominance, the force in men’s lives comes from the near constant reminders that they need to keep their shit together or they will be degraded or removed, often with the full force of the law.

Given the risks and costs associated with sex, pregnancy, childbirth, and an increased susceptibility to disease, it should be no surprise that women’s mate choice would be more complex, sophisticated, and discerning. Selection choice, while complex, is functionally measured in esteem and value, as measured against a man’s ability to “keep his shit together” at an age appropriate level. In other words, men are suitable when they have the resources and capabilities to manage the complexity of life within your acceptable boundaries. They become less suitable when the complexity of life slips through and perhaps some of it gets on you.

This simplified animation describes some of the most common traits of mate selection. While traits can vary widely from culture to culture, or woman to woman, one trait that is nearly universal is a “willingness to sacrifice your resources or yourself for the needs of women and children.” Men and boys who do not meet the age appropriate minimum levels of desired skills, attributes, and values to maintain their suitability, are derogated.

It may not be surprising that “funniness” or “sense of humor” is also a widely reported desirable male selection trait, as it may be a mechanism to diffuse the stress related to systemic derogation.

We appear to measure the value of a human life based on the level of biologic and behavioral disgust response, yet we understand very little about how it affects us emotionally and behaviorally. Given the disproportionate levels of grossness among men as a group, it’s no wonder we often refer to men and boys using parasite, parasite carrier, or parasite containment metaphors, using labels like, “louse, rat, piece of shit, shit-bag, or even the occasional douche/bag, who can’t keep his shit together and thinks his shit doesn’t stink.”

Additionally, humans will use mental illness metaphors to indicate parasites or pathogens: crazy, retarded, schizophrenic, hyper, or narcissist. These labels are more likely to cause derogation among men.

Of all the people in all of the world, none but the most radical of feminists actually hate men, but to one degree or another, most everyone will think of men as homogeneous stereotypes and view them with some level of contempt, disgust, and distrust. Only by dealing with their shit, hiding their shit, covering their shit up, etc. can a man be considered “One of the Good Ones” or “One of Ours” rather than “One of the Bad Guys from Across the River.” And unfortunately, in order to keep their in-group status with women (and avoid derogation) many men engage in a wide mix of shitty, destructive, and self-destructive behavior. They will accept and join in on the systematic derogation of other men willingly, in order to keep their esteem with the in-group. The recipients of this systemic bullshit will be your brothers, fathers, uncles, boyfriends, and husbands, and they will go to extreme lengths, including the ultimate, irreversible form of self-destruction, in order to keep you from knowing that they can’t contain it or let any get on you.

In the next article, “Oh Fuck; We’re Doomed and Only Women Can Save the Day” we’ll further explore this trait which human males forgot to develop, and discuss what women might do to save humanity from an authoritarian dystopian hellscape.

To read all of the articles in this series:
Article #1 – Otto Warmbier, Philando Castile and the Outgroup Derogation of Men
Article #2 – Grossness as a Human Value Indicator
Article #3 – A Weak Case for the Humanity of Men
Article #4 – Oh Fuck; We’re Doomed and Only Women Can Save the Day
Article #5 – Philando Castile, Justine Damond, and the In-Group Bias Toward Woman

Reform of Family Law strikes at the heart of gynocentrism

Healthy fats for a healthy mood